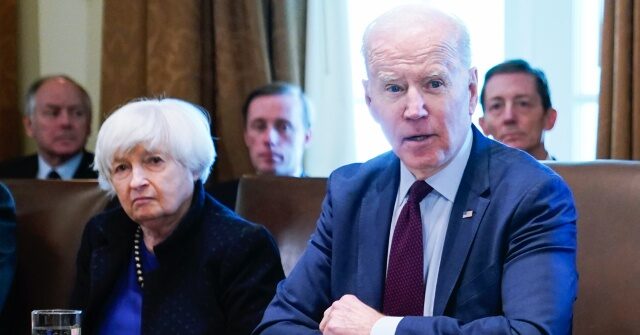 President Joe Biden’s Treasury Secretary Janet Yellen is now begging the Internal Revenue Service (IRS) not to target working and middle-class Americans after Senate Democrats voted down a measure that would have banned such practices.

On Sunday, Senate Democrats passed the “Inflation Reduction Act” which includes $80 billion for the IRS to conduct widespread “enforcement” and “criminal investigations” via audits into American taxpayers.

Democrats, on a party-line vote, voted down Sen. Mike Crapo’s (R-ID) amendment that would have banned any of the new IRS funds from being used to target Americans earning less than $400,000 annually. Crapo said the amendment ensured that President Joe Biden would not break his promise to not raise taxes on Americans earning less than $400,000 a year.

Instead, Democrats tried to include language that only suggested the IRS not to go after working and middle-class Americans with more audits — vowing “nothing in this subsection is intended to increase taxes on any taxpayer with a taxable income below $400,000.”

That language though, Breitbart News is told by officials on the Senate Finance Committee, was taken out of the finalized version of the bill. Now, the bill includes no requirements, or even suggestions, that the IRS not target working and middle-class Americans.

Yellen, as a result, has written a letter to the IRS Commissioner pleading with the agency not to go after Americans earning $400,000 or less annually.

“Specifically, I direct that any additional resources … shall not be used to increase the share of small business or households below the $400,000 threshold that are audited relative to historical levels,” Yellen wrote.

Already, White House Council of Economic Advisers member Jared Bernstein has said the administration cannot guarantee that no Americans earning under $400,000 a year will be audited by the IRS with the new funds.

This statement contradicted White House Press Secretary Karine Jean-Pierre who said there would be no new IRS audits of Americans earning less than $400,000.