Will XAU/USD Overturn the Medium-Term Downtrend?

Anti-fiat gold prices closed at their highest since early January, extending the near-term uptrend since early March. Monday’s performance was the most aggressive advance in over a week. Now, the medium-term downtrend since August 2020 could be looking increasingly vulnerable depending on how price action behaves ahead.

The yellow metal capitalized on a weaker US Dollar, particularly during the Wall Street trading session. This may have been due to rising near-term inflationary woes. The US 5-year breakeven inflation rate touched 2.76%, up from 2.71% on Friday. Ongoing dovish commentary from the Federal Reserve may have been fueling this, likely due to the central bank’s insistence that near-term price pressures are transitory.

That is opening the door to a loser policy for longer than anticipated. Fed Vice Chair Richard Clarida noted that the central bank ‘will give an advance warning’ prior to tapering asset purchases. Gold can be perceived as an anti-inflationary hedge in some cases. Even though most equities on Wall Street closed in the red, the value-oriented Dow Jones Industrial Average did not decline as much as the growth-linked Nasdaq Composite.

With that in mind, XAU/USD may continue benefiting in the short term. The US Dollar is slightly weaker during Tuesday’s Asia Pacific trading session. The US economic docket is fairly light over the remaining 24 hours, likely placing gold’s focus on general market sentiment. A risk for the precious metal is that the US Dollar begins to capitalize on rising bond yields again, which may be a longer-term vulnerability.

On the 4-hour chart, gold prices appear to have confirmed a push above the falling trendline from August 2020. Having said that, a key zone of resistance immediately ahead is the late January high at 1874. This is as negative RSI divergence shows that upside momentum is fading. That could open the door to a turn lower. Otherwise, a push above 1874 may overturn the bearish technical warning signs. 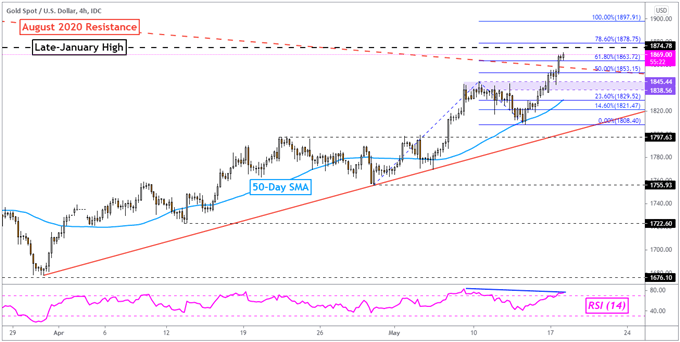 The Economics of Solar Power