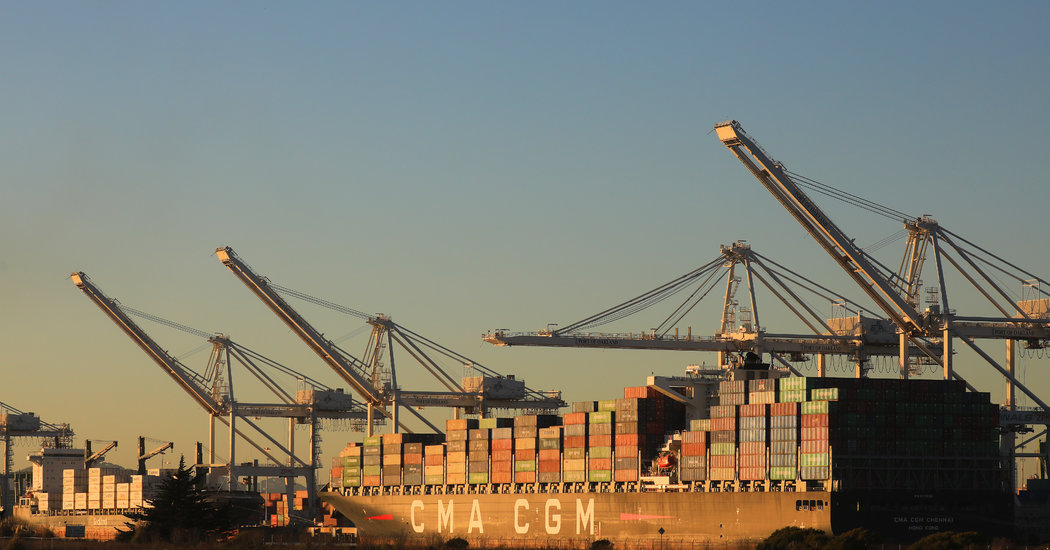 WASHINGTON — The Trump administration is considering postponing tariff payments on some imported goods for 90 days, according to people familiar with the matter, as it looks to ease the burden on businesses hurt by the pandemic.

Some businesses and trade groups have argued that the levies President Trump imposed on foreign metals and products from China continue to raise their costs and weigh on their profits at a time when the economy is slowing sharply. But in recent weeks, Mr. Trump and his advisers have denied that cutting tariffs would be one of the measures they would undertake to buoy the economy.

The White House now appears to be considering a proposal that would defer tariff duties for three months for importers, though it would not cancel them outright. The administration’s consideration of a deferral was first reported by Bloomberg News.

It is not clear which tariffs the deferral might apply to, or if the idea will ultimately be approved. But the proposal appears to be separate from a March 20 announcement by U.S. Customs and Border Protection that it would approve delayed payment of duties, taxes and fees on a case-by-case basis.

Leading business groups including the U.S. Chamber of Commerce, the National Association of Manufacturers and the U.S.-China Business Council have pressed the administration to roll back tariffs permanently as part of its emergency economic response.

In a letter to the president on Wednesday, Republican members of the Senate Finance Committee urged the president to temporarily defer the collection of duties; provide tariff relief on medical devices, drugs and other pharmaceutical products; and issue a “total moratorium on new tariffs or tariff increases for the time being.”

But some other trade groups have protested the idea of lifting tariffs. The Coalition for a Prosperous America, which lobbied for the tariffs, said in a letter to the U.S. Customs and Border Protection Tuesday that the deferral would harm American producers that have been injured both by unfair imports and by the coronavirus.

“This effort by C.B.P. will only exacerbate the financial situation of countless Americans,” the group said.

The Trump administration has already issued narrow exemptions to eliminate tariffs on surgical gowns, masks, gloves, hand sanitizer and other medical products that are imported from China. The Office of the U.S. Trade Representative announced on March 20 that it would create a process for companies to comment if they believed further modifications to the tariffs were necessary.

NFP Posts Yet Another Beat as US Job...