Where’s Your Being Outside Licence? Police End Stonehenge Gathering

Normally an annual gathering of British eccentrics marking the midsummer at one of the world’s most ancient sites, police descended on Stonehenge Monday morning to break up a meeting that contravened the government’s coronavirus lockdown regulations.

Police officers physically removed celebrants as they dispersed a crowd at the world-famous Stonehenge site, a Bronze Age UNESCO World Heritage Site formed of circles of enormous standing stones. Thought to be at least 4,000 years old, the stones are so arranged as to align with the rising sun on the morning of Summer Solstice — today.

The stones have major significance for British people generally, for world history, but also for British counter-cultural groups including Pagans and Druids, who celebrate simulacrums of pre-Christian festivals at Stonehenge annually. 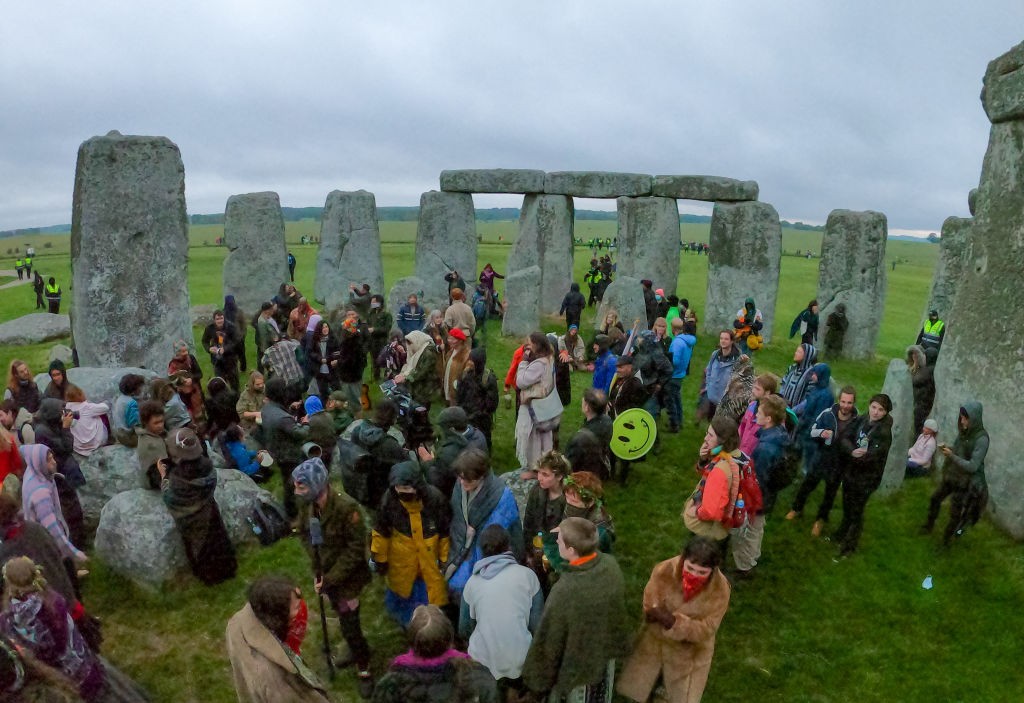 AMESBURY, ENGLAND – JUNE 21: A large number of people enter the closed site at Stonehenge on June 21, 2021, in Amesbury, United Kingdom. English Heritage, which manages the site, said, ‘With this week’s news that the Government is delaying the lifting of the remaining Covid-19 restrictions on 21 June we have taken the difficult decision to cancel the planned Summer Solstice celebrations at Stonehenge this year’. (Photo by Finnbarr Webster/Getty Images)

But this year — as it was in 2020 — the Summer Solstice celebration at Stonehenge was cancelled by the government, with revellers warned to keep away. In a normal year, tens of thousands can gather. In the event, hundreds defied the government’s coronavirus orders to gather outdoors. Others gathered at the nearby Avebury stone circle, which was also closed to visitors.

Police say one arrest took place of a woman who was “drunk and disorderly”. Police and security staff cleared the stones of people and Superintendant Dave Minty was quoted by the BBC as having said of the revellers “most people have been well behaved”.

English Heritage, the body which manages the Stones on behalf of the government had intended to broadcast a live stream of the sunrise at Stonehenge this morning for the benefit of those who stayed at home but cut the feed in the early hours to prevent showing those who turned up against orders. Once the revellers had been cleared the video was restored.

Despite the government’s own scientists making clear early fears over coronavirus transmission outdoors were completely overblown, throughout the over year-long lockdown the authorities have shown themselves to be quite proactive in going after people being outside. 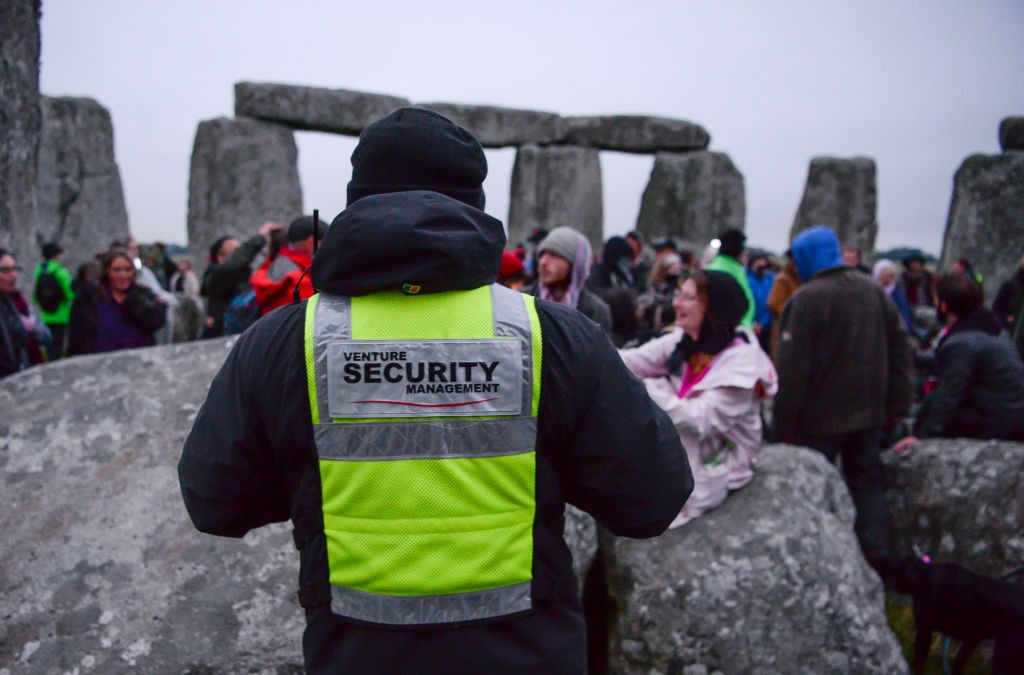 AMESBURY, ENGLAND – JUNE 21: A security staff looks on after a large number of people enter the closed site at Stonehenge on June 21, 2021, in Amesbury, United Kingdom. (Photo by Finnbarr Webster/Getty Images)

Derbyshire police have repeatedly hit the headlines over the course of lockdown for their aggressive and sometimes surreal approach to enforcing the government’s advice. In 2020, the police stalked dogwalkers at a local beauty spot with a camera drone and uploaded the footage to social media, slamming the lone walkers enjoying the wide, empty space for undertaking “not essential” activities. The same force also took umbrage at people enjoying the local ‘Blue Lagoon’ beauty spot and poured black dye into the water to make it look less attractive.

The force was up to their old tricks again in 2021, when two friends who took advantage of a loosening of coronavirus rules to allow people to meet up were fined because they had arrived carrying coffee cups. The force decreed this constituted a picnic and was therefore against government rules.

Stonehenge was given to the British people in perpetuity by wealthy lawyer Cecil Chubb in 1919, on the condition that “the public shall have free access to the premises” in perpetuity. Chubb also required that Britons not be charged more than a shilling per visit, about £3 in 2021 money after inflation. The actual fee charged by English Heritage to see the stones in 2021 is £19.50. 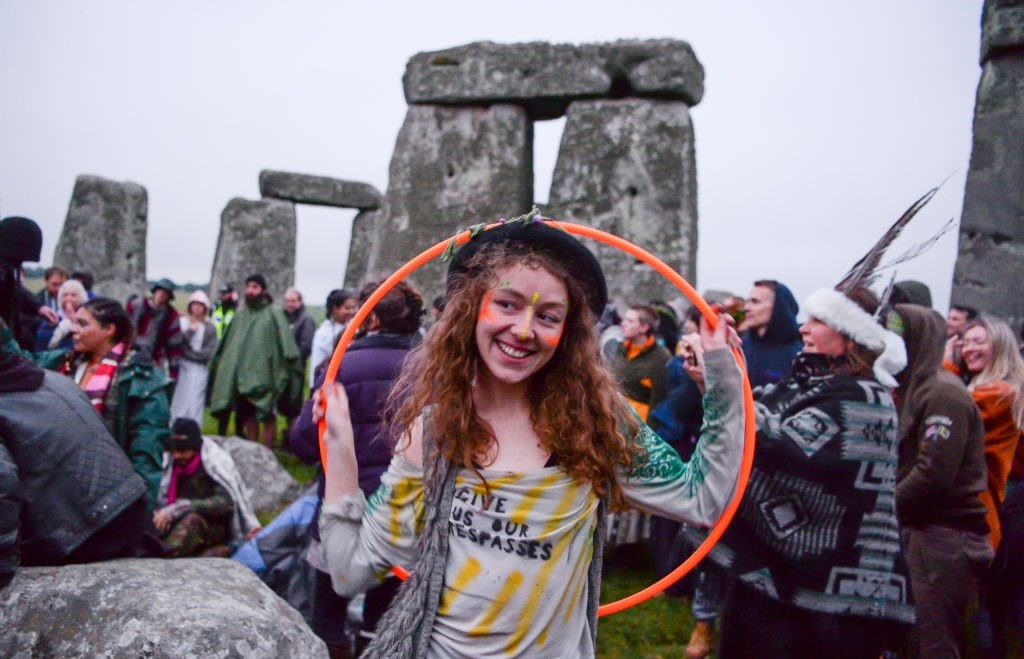 Tesla reports record $1B income for Q2 despite...

Goldman Sach’s new ‘DeFi’ ETF is anything but