What’s holding up the vote 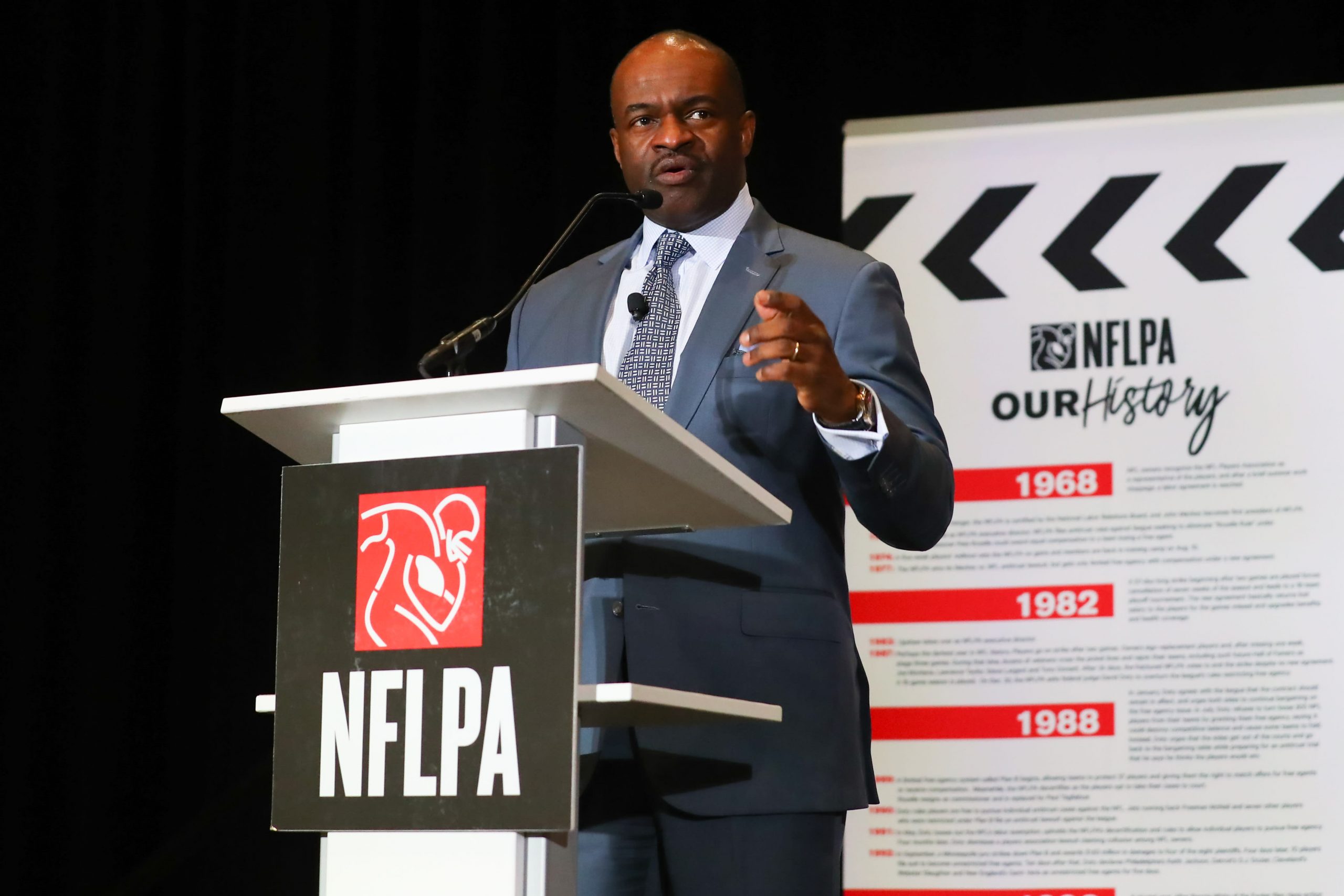 DeMaurice Smith the Executive Director of the National Football League Players Association speaks during the NFLPA press conference on January 30, 2020 at the Miami Beach Convention Center in Miami Beack, FL.

The proposal is with the NFLPA’s body, consisting of more than 1,500 players. League officials have told CNBC the union would like to make the votes official before the union’s annual meetings next week in Miami. Both sides prefer to have the deal ratified by the owners’ meeting at the end of the month, according to people familiar with the talks. They spoke on condition of anonymity because they were not authorized to discuss the talks.

But with star players like Green Bay Packers quarterback Aaron Rogers publicly giving a thumbs down along with fears of misinformation circulating throughout players, the NFLPA appears to be divided.

“I think this contract endangers him,” said Donald S. Prophete, a partner for the Kansas City-based Constangy, Brooks, Smith & Prophete law firm who has worked on CBAs and is familiar with the new terms of the NFL’s plan.

It’s been nearly a week since team owners approved a 10-year CBA. The union’s executive committee voted 6-5 against recommending it to the board, which is made of the 32 player representatives.

Three people with knowledge of the negotiations told CNBC one of the holdups centered around the new 17-game format capped at $250,000 per player. After a meeting at the 2020 NFL Scouting Combine in Indianapolis last week, owners agreed to drop the cap, leading to the NFLPA’s board to vote 17-14-1 to send to union members.

Under the new terms, players would receive 47% of league revenue, which The Wall Street Journal reported amounted to roughly $16 billion over the last year. The share increases to 48% in 2021, and 48.5% if a 17th regular season game is added. The projected payout would be $5 billion to players throughout the 10-year deal, according to the new terms.

Top stars like Seattle Seahawks quarterback Russell Wilson and Rodgers used Twitter to explain why they oppose the deal. The NFLPA’s president, Eric Winston, said Wilson was misinformed after implying the CBA was being rushed. Media experts said owners want to force a deal with players in efforts to start working on renegotiating NFL media rights.

Other terms of the proposal include an increase in the minimum salary for players on a club’s active or inactive roster to a starting point of roughly $600,000, up from $510,000 expected in 2020 if no new deal is signed. Players would then see an additional $105,000 added in the 2021 season, and annual increases of $45,000 for the remainder of the agreement.

The people said star players’ real concern isn’t about offseason workload or work environment, but rather the lack of increased revenue — some players still want a 50-50 split of league revenue.

Fearing bad information would be spread among players, the NFLPA used its annual gathering with agents to hold an information session, making sure the reps could explain what the proposal meant to their clients.

Smith also held a small media session outside the Indianapolis meeting, saying he approved of star players sharing their concerns about proposal.

The NFLPA did not respond to requests for comment.

“The stars want all the money,” Prophete said. “The guys who are doing all the grunt work, that you can’t win without, want a little bit of the pie. But the stars have all the power — they have the voice. He’s got to walk a fine line to be able to accomplish good things for all.”

With opinions about the CBA so divided, Prophete said Smith, who was criticized in the last round of CBA talks in 2011, could be nearing his end as NFLPA director.

According to sources familiar with the situation, owners and the NFLPA favored new terms for retired players, which is considered the most favorable package in the league’s history.

If Smith is still the director, he may be forced to negotiate two more significant issues continuing to make rounds among NFLPA meetings: fully guaranteed contracts and lifetime benefits, usually sought by retired payers. Team owners are opposed to the inclusion of both terms in any agreement.

The people said the NFLPA has attempted to explain to players how NFL contracts are negotiated compared with other leagues to no avail. Players still use the National Basketball Association as an example, failing to realize the NBA technically doesn’t include language in its collective bargaining agreement that guarantees deals with the exception of rookie contracts, according to the people.

Though it was presumed by front offices and agents that NBA contracts will have guarantees, especially transactions for superstar players, language still needs to be written into agreements, and not all NBA players have fully guaranteed contracts.

“It’s a myth,” one NBA agent told CNBC about the perception that all NBA contracts are fully guaranteed. The agency also pointed out that the two leagues’ salary caps are structured differently, with the NBA operating on a soft cap — with significant tax penalties for exceeding it — and the NFL having a hard cap.

The NFLPA’s rocky relationship with agents is to blame. The people said union officials believe agents aren’t properly educating their clients on NFL contracts, which can be fully guaranteed.

Priority Sports and Entertainment, founded by sports agent Mark Bartelstein, represents Minnesota Vikings quarterback Kirk Cousins. When the agency did Cousins’ three-year contract in 2018, it negotiated a fully guaranteed deal. According to Spotrac.com, Cousins’ $84 million deal is the highest active guaranteed contract in the NFL.

Asked what occurs to the NFL business model should the league guarantee all deals for 2,000 players, Prophete said it would be “extremely” expensive, questioning who would be responsible for the bill.

But though the NFLPA once again appears in disarray, and top stars publicly grumbling, the people said league and union officials believe the CBA proposal will be approved, and possibly before the NFLPA’s annual meetings next week in Miami.

“For them not to sign this and to risk a lockout — you never make that money up as a player,” Prophete said. “This is a good contract. They need to sign this contract and then think about 2031.”

Highland Park attack: What we know about the...