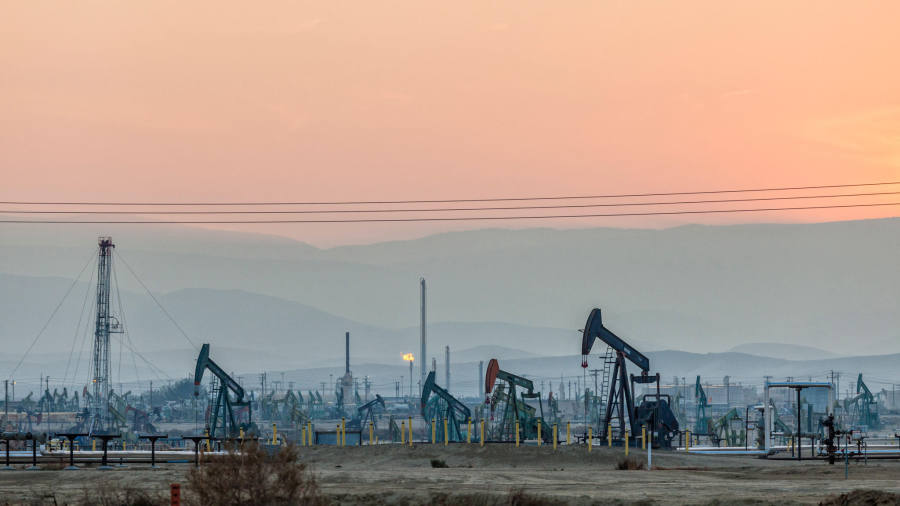 A decade of shale drilling has transformed US energy. The country’s oil output has more than doubled, cutting its dependence on foreign supplies, while an abundant supply of cheap natural gas has enticed power plants to switch from dirtier coal and helped lower US carbon emissions.

US oil production, just 5.5m barrels a day in 2011, is now a world-leading 13m b/d. Pipelines and other infrastructure have sprouted across the coast of the Gulf of Mexico to support a surging oil-export trade. If the US were a member of Opec, it would be among the cartel’s biggest exporters.

But this revolution is under threat, as US drillers are being pushed into the front line of a new price war declared in early March at Opec’s Viennese headquarters by Russia and Saudi Arabia — a fight launched just as the coronavirus pandemic arrived to cripple global oil demand at the same time.

The latest price shock, which has more than halved the cost of oil since the start of the year to under $30 a barrel, has further exposed a shale sector that depends on constant cash infusions and the dwindling faith of investors.

Shale is unusual in the oil business because of its high decline rates: a typical well produces prolifically for a year before output drops steeply in the second and then settles into a modest and diminishing flow rate thereafter.

Just to hold US shale production steady year after year, let alone increase it, requires ever more wells to be drilled. Of more than 14,000 new wells that had been expected this year, 85 per cent were needed to match last year’s level. All that drilling in 2020 was forecast to cost more than $100bn, according to Rystad Energy, a consultancy.

But those plans were made before the Saudi-Russian price war erupted and the coronavirus pandemic began to sap global oil demand — and will be scaled back in the coming months, say analysts. Matt Portillo, managing director at Houston investment bank Tudor, Pickering, Holt & Co, says an oil index price of $50 or below per barrel will lead to capital expenditure cuts and a fall in US oil production within six months.

Shale drillers such as Diamondback Energy and Parsley Energy have led the industry in already announcing sweeping cuts to drilling plans, while larger rival Occidental Petroleum has cut its much-treasured dividend. “It’s over for now,” says Francisco Blanch, head of global commodity research for BofA Merrill Lynch, adding that capital markets are now shut to the shale sector.

At $30 a barrel, Rystad reckons capital spending next year will fall 70 per cent to about $30bn. Fewer than 5,000 wells could be drilled and production would fall more than 2m b/d. Goldman Sachs, the bank, says output will start dropping in the third quarter this year.

The short-term impact on oil-producing states will be significant, as rigs are idled, their crews are sacked, hotel occupancy drops, and restaurants close, compounding the broader economic shock anticipated from the coronavirus pandemic.

Shale has been through a price war before and survived. That was in 2015-16, when Saudi Arabia, alarmed at the spectacular production surge in the US, opened its taps to drive down prices and break the Texan upstarts.

US production then fell 1m b/d. But the Saudi assault winnowed out the weaker shale producers and left a more cost-efficient business behind. When the kingdom and Russia reversed course and started cutting supply in 2017 to prop up prices, the shale sector roared back to life, adding more than 4m b/d in the years that followed.

This time, however, could be different for three reasons. First is coronavirus, which by wiping out millions of barrels a day of oil demand this year and driving crude prices to multiyear lows has demolished the business models for capital-intensive producers like those in the shale patch.

Second, Russia may prove a stronger adversary for shale producers than Saudi Arabia. Moscow is motivated both by anger at US sanctions on its own energy sector and a desire to recapture market share. The Russian government says its financial reserves will let it endure a price below $30 per barrel for up to a decade — a fight that may therefore last even longer than the virus.

The third reason is Wall Street. US investors were already unhappy with shale’s business model and the long-term outlook for fossil fuels well before the latest oil price collapse.

Many lenders say they will not return even if oil prices recover. “This industry has been a junkie hooked on access to capital, whether equity or development, that’s driven uneconomic growth over the past decade,” says Mr Portillo.

Many US shale companies will soon hit a debt wall and bankruptcy risks in the shale patch have risen sharply, say rating agencies.

Supermajors such as ExxonMobil and Chevron both still plan large oil output increases in Texas’s Permian basin in the coming years. Further consolidation in the distressed shale sector is likely and business that re-emerges will be more efficient. But its foreign rivals in the oil world — and its bruised backers on Wall Street — are not about to let it rise unchecked again.