A consortium led by the world’s biggest independent oil trader Vitol is set to acquire a 5 per cent stake in a giant Arctic project being developed by Russia’s state-backed oil company Rosneft.

Terms of the investment in Vostok Oil were not disclosed but Trafigura, another big commodity trader with close ties to Rosneft, paid more than €7bn last year for a 10 per cent stake in a deal that also secured it access to crude supplies. Vitol declined to comment.

Through the Vostok project Rosneft hopes to develop a new oil-producing region in Siberia to rival the US Permian Basin and Saudi Arabia’s Ghawar oilfield. The company plans to build 15 new towns to house the 400,000 people needed to build and operate wells and infrastructure as it seeks to tap an estimated 6bn barrels of crude.

Big commodity traders such as Vitol are usually wary of investing directly in production unless they can lock in prized supply agreements to feed their huge trading arms or can pick up assets at a discount.

Rosneft, which has been hampered from developing its own trading operations by US sanctions, has long fostered relationships with big trading houses that covet the large-scale supplies the company can give them.

Trafigura, Glencore and Vitol have all competed over the years to be Rosneft’s favoured partner but since 2018 Vitol’s share of supplies from the company has shrunk markedly, according to data from consultancy Petro-Logistics SA.

The other member of the consortium investing in Vostok is Mercantile & Maritime, a Singapore-based commodity trader led by Pakistani-born businessman Murtaza Lakhani, a one-time Glencore agent in Iraq.

The apparent rise in trading house interest in production comes as western groups including BP and Royal Dutch Shell start reducing their oil output amid growing pressure to address climate change. The International Energy Agency said last month that companies must stop all new oil and gas exploration projects from this year if global warming is to be kept in check.

As European majors begin their shift towards renewable energy, national oil companies such as Rosneft and Saudi Aramco hope to push ahead with new ventures.

Igor Sechin, Rosneft chief executive, said last week the world was facing a severe deficit of oil and gas because of under-investment in new projects.

“The world consumes oil, but isn’t ready to invest in it,” he told the St Petersburg International Economic Forum. “It shouldn’t be about rejecting oil, but about rejecting crude from environmentally unfriendly projects.”

He said calls for a hasty energy transition required “an unrealistically fast launch of renewable energy sources and faces issues with storage, ensuring reliability and stability of power generation”. 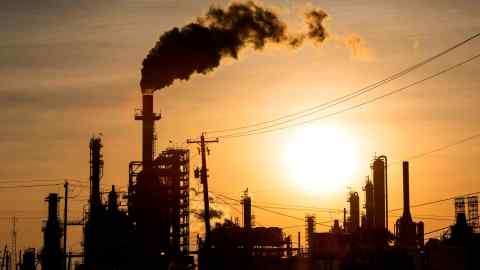 Vostok is expected by analysts to produce 1m barrels of oil per day by 2028 and more than 2m b/d by 2035 — the equivalent of roughly 2 per cent of global supply. But the project, which Rosneft has also been pitching to Chinese and Indian investors, will cost more than $130bn to develop.

Rosneft believes Vostok will be well-placed to serve Europe but aims to supply Asian markets via the Northern Sea Route, a fair-weather shipping lane between the Atlantic and Pacific oceans that cuts the sailing time from west to east.

Rosneft claims Vostok will yield “green barrels” of oil thanks to a carbon footprint it claims is substantially lower than other big new oil projects.

The high quality of feedstock did not require separate installations at the refineries, which would significantly reduce the project’s emissions, the company said. However, critics point out that the majority of emissions related to oil occur when fuel is burnt in cars or other applications.

Vostok’s crude is believed to be very “sweet”, containing 10 times less sulphur than Brent, the international oil marker, meaning it could fetch a premium on global markets of more than $10 per barrel, according to Ronald Smith, senior oil and gas analyst at BCS.

The location of Vostok, roughly equidistant from Asia and Europe, opened up the potential for significant arbitrage opportunities, Smith said

“Adding another trader to the project is a positive for Rosneft shareholders, as it should help maximise two key advantages of the project in the context of the global oil market.”