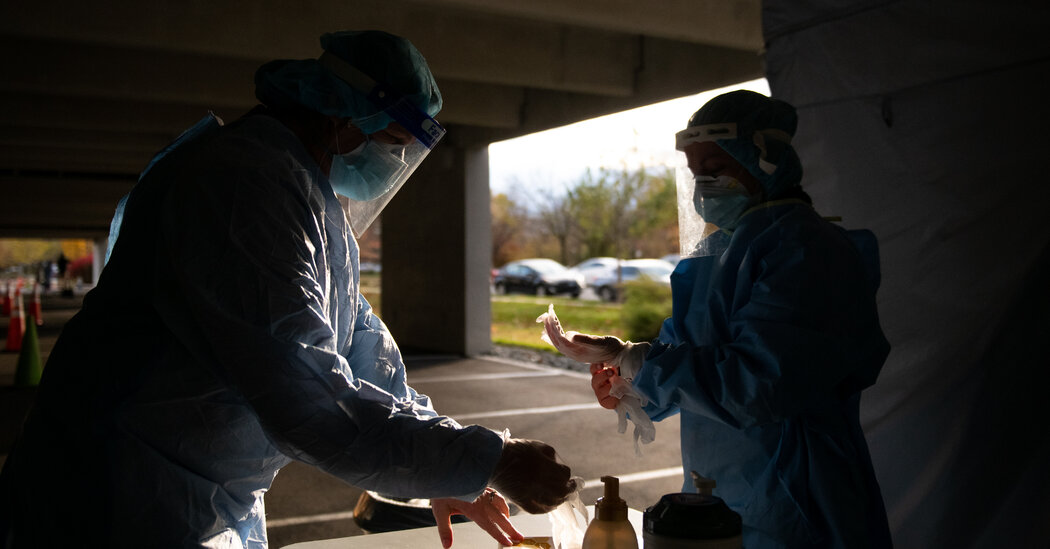 The job market is showing signs of weakening again, as more Americans file for unemployment benefits amid a sharp rise in coronavirus cases and new restrictions on business aimed at curbing the outbreak.

Initial claims for state employment insurance jumped by more than 18,000 to over 743,000 last week, before adjusting for seasonal factors, the Labor Department reported Thursday. It was the first increase since early October and represented an ominous turn for a labor market that has struggled to recover fully from the huge layoffs that accompanied the pandemic’s arrival in March.

“The latest data points to the fragility of the recovery as the Covid crisis worsens,” said Gregory Daco, chief U.S. economist at Oxford Economics. “If this trend continues, it’s an indication that the labor market recovery has gone into reverse.”

New claims for Pandemic Unemployment Assistance — a federal program for gig workers, independent contractors and the self-employed — totaled 320,000, an increase of 24,000 from the week before.

Although the economy rebounded strongly in the third quarter and overall unemployment fell to a seasonally adjusted rate of 6.9 percent in October, that momentum has faded in the absence of new aid from Washington.

The latest wave of the outbreak threatens to further devastate big employers like airlines, restaurant chains and hotels, with the U.S. Centers for Disease Control and Prevention urging Americans on Thursday to avoid traveling for the Thanksgiving holiday.

Mobility — in terms of walking, driving and use of public transportation — is already showing a decline, as are restaurant bookings, according to Torsten Slok, chief economist at Apollo Global Management.

“If people are staying home, that means they are not shopping or going out, and that means less employment,” he said.

What’s more, two emergency federal programs to aid people thrown out of work by the pandemic are scheduled to expire at the end of next month.

A new study by the progressive Century Foundation found that 7.3 million workers would lose their benefits with the end of Pandemic Unemployment Assistance. An additional 4.6 million will be cut off from Pandemic Emergency Unemployment Compensation, which kicks in when state employment benefits run out.

The programs represent “the last lifelines available to millions of Americans in desperate need,” said Andrew Stettner, a senior fellow with the Century Foundation and co-author of the study with Elizabeth Pancotti. “It will be a crippling end to one of our darkest years.”

A separate study by the California Policy Lab, a research group working with state and local governments, reported that nearly 45 percent of California workers had filed for unemployment benefits since March, with 83 percent of the Black labor force applying during that period. Many of those workers are back on the job, but the end of the two programs will affect 750,000 Californians.

A new aid package from Washington would provide critical support for the economy right now, according to many economists. But stimulus legislation has been held up by differences over its scale.

On Monday, President-elect Joseph R. Biden Jr. called on the two parties to “come together” and enact a stimulus package along the lines of a $3 trillion proposal passed by the Democratic-controlled House. The Senate’s Republican leadership backs a $500 billion outlay.

For all the body blows of the last year, consumer demand remains relatively healthy, according Michelle Meyer, head of U.S. economics at Bank of America. “We are still seeing incredible strength in housing, and auto sales remain strong,” she said. “Consumers are still spending on bigger-ticket items.”

Sales of existing homes rose last month at the highest rate in 14 years, the National Association of Realtors reported Thursday, fueled by rock-bottom interest rates that have encouraged house hunters to borrow and buy.

The Dickensian elements of the Covid-19 economy — unemployed workers facing a cutoff in benefits even as other Americans buy houses worth hundreds of thousands of dollars or more — underscore the unevenness of the recovery.

Lower-paid service workers have been hit especially hard, and the rise in virus cases threatens new pain. White-collar workers have fared better, with the unemployment rate for college graduates standing at just 4.2 percent.

Even for workers who have found jobs, the economy presents forbidding challenges. Some, like Christopher Crystal, have had to settle for paychecks that are a fraction of what they used to earn.

Mr. Crystal, 45, was furloughed in March from his job as a logistics manager at John F. Kennedy International Airport in New York, where he worked for 11 years and oversaw a staff of 500.

His furlough turned into a permanent layoff in September, and the $400 he was receiving each week in state unemployment benefits was not nearly enough to cover his family’s monthly bills, including $1,500 in rent for their apartment in Long Island, a $250 car payment and $250 for car insurance.

As his credit card bills grew, Mr. Crystal started looking for a job that would pay him more than his unemployment benefits.

In early October, he found a job as a delivery driver for Amazon. But he is earning $40,000 annually instead of his old $70,000 salary — and the job requires him to work 10-to-12-hour shifts lifting heavy boxes.

“I’ve been taking all the overtime they can give me just to try to catch up,” he said.

Mr. Crystal is glad to have a job, which has provided extra cash to buy clothes for his 5-year-old son. But he still feels mired in debt from the bills that stacked up while he was out of work.

“Now our savings are depleted, and my credit score has dropped like crazy,” he said. “It will take us a long time to dig ourselves out of this hole.”

27/05/2020 admin Comments Off on Do Zero-Reserve Loans Make Tether Better Off Backed by Bitfinex Stock?