We’ve seen a range of PMI data out this morning and almost all of the readings have been weaker than expected butthe data shows how economic recovery retained impressive momentum in August. Kicking it off with France, the manufacturing figure came in at 57.3 as predicted by economists, dropping from 58, whilst the services reading came in at 56.4, below the 57 expected, bringing down the composite reading to 56.4, below expectations of 57. 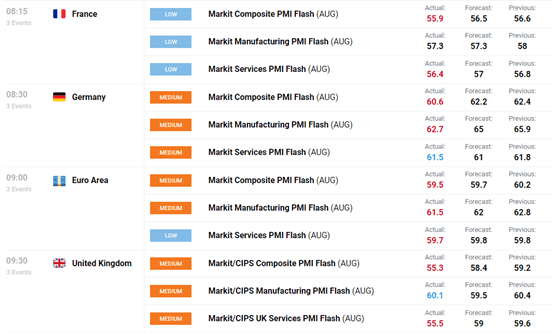 Germany was next and despite the services print being able to hold above expectations (61.5 vs 61 exp) it still saw a drop from the previous month. Maybe the more concerning print was the manufacturing PMI, which dropped to 62.7 (65 exp) from 65.9, its lowest reading since February this year and an indication that concerns about slowing demand and growth may be materializing, especially as Germany is the main exported within the Eurozone.

That said, the readings in July were the highest in two decades, showing that business activity has been very strong over the summer months as a rapid vaccine rollout has allowed more businesses to operate. The aggregate PMIs for the Eurozone have also come in weaker than expected for August but they remain firmly in expansion.

In the UK, the manufacturing PMI beat expectations whilst the services reading came in much softer than expected at 55.5 (59 exp), as staff shortages and wage inflation has started to have an effect on costs and margins.

The Euro has been slightly stronger this morning with EUR/USD getting a small nudge higher after the German PMI data was released. As I mentioned, despite the readings being below expectations, it isn’t surprising that the data has come off slightly since the two-decade high seen in July, given recent concerns about slowing growth and rising delta cases around the globe.

EUR/USD has managed to hold on to the 1.17 mark but remains within the key support area. Buyers should target to get the pair above 1.18 if they want to recover some bullish momentum but the 1.19 area is also likely to offer some resistance in the short term.

The British Pound is also picking up some momentum this morning after a week of strong pullbacks saw GBP/USD drop to a one-month low just above 1.36. The key challenge up ahead for the pair will be 1.3670, followed by an area of conflicting price pressures between 1.3719 and 1.3802. To the downside, a break below 1.3570 (23.6% Fibonacci retracement) would likely bring on further weakness towards 1.3520.