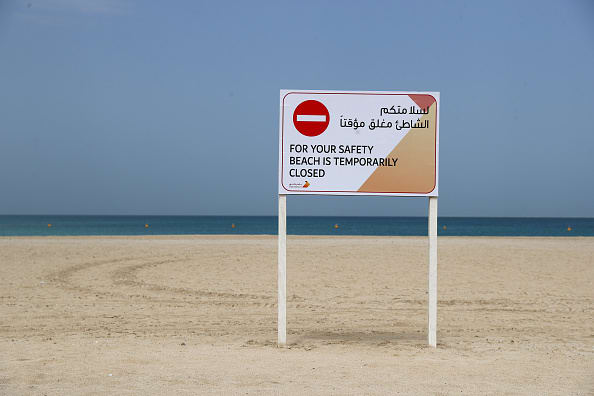 A signboard show that the beach is temporarily closed is seen on March 22, 2020 in Dubai, United Arab Emirates. Authorities announced that all beaches in Dubai will be closed until further notice to slow the spread of COVID-19.

The instructions to self-isolate, in line with national and international health authority guidelines, are among the country’s latest efforts to stem the spread of the new coronavirus, or COVID-19, that has so far infected more than 300,000 people and killed more than 12,900 globally. The UAE has confirmed 153 cases, with 38 recoveries and two deaths.

“The UAE government has called upon the public to stay at home unless it’s absolutely necessary to get essential supplies, such as food and medicine, or perform essential jobs,” UAE state news agency WAM said in a statement Monday morning.

And the authorities want the public to know that they are serious. The Dubai Police on Sunday arrested a European national who posted on his Instagram videos of himself at a recently-closed beach flouting the ban on gathering in public spaces, ignoring a police patrol and mocking the new regulations. The man, reported to be a personal trainer, filmed groups of people in the water and praised them for continuing to go to the beach in the face of the ban.

The man “ignored the instructions of a police patrol while mocking precautionary measures issued by health and official authorities,” Dubai police said in a statement.

“The General Command of the Dubai Police warns that residents must comply with the directives issued by security entities, be they local or federal,” the statement said. “If safeguards for public health are violated, residents will be held accountable and face legal measures.”

All beaches were closed over the weekend after hundreds of visitors continued to populate beachfront areas despite authorities’ social distancing pleas. Gyms, parks, cinemas, malls, bars, places of worship, numerous restaurants and other public venues have also been closed across the country of 9.4 million.

Social distancing directives are also being applied to local transportation, with authorities saying that new instructions concerning public transport and taxi travel will be issued “later.”

“The public are also urged to use their own family cars with a maximum of three individuals per vehicle,” the agency said, citing the Ministry of Interior and the National Emergency and Crisis and Disasters Management Authority. “They are also advised not to visit public places and maintain social distancing protocols during family gatherings as part of the precautionary measures taken to ensure public health and safety.”

The authorities are also urging people not to visit hospitals except for emergency cases and to use face masks.

Travel in and out of the country will also be completely halted, with the Gulf country’s aviation authority grounding all passenger flights — inbound, outbound and transit flights — for at least 2 weeks beginning on March 25.