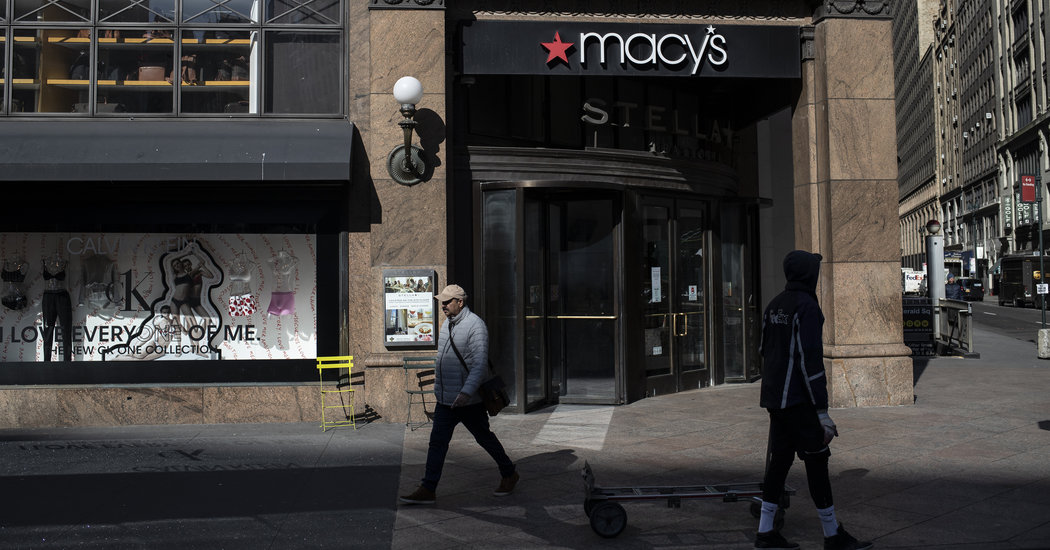 Macy’s and Gap said on Monday that they planned to furlough much of their work forces, a stark sign of how devastating the coronavirus will be for major retailers and their workers who sell clothing, accessories and other discretionary goods.

Macy’s, which said the cuts would affect the “majority” of its 125,000 workers, lost most of its sales after the pandemic forced it to close stores. Gap, which also owns Old Navy and Banana Republic, said it would furlough nearly 80,000 store employees in the United States and Canada. The announcements followed similar actions by other name-brand chains with products considered nonessential.

When a national emergency was declared earlier this month, a number of retailers announced stores would close but vowed to keep offering pay and benefits to employees for at least two weeks. As the odds of reopening stores quickly became increasingly unlikely, many extended workers’ pay into April.

But now, it appears the money is drying up. A large part of the retail industry that is not involved in selling groceries, toilet paper or disinfectant simply has very little cash coming in.

L Brands, which owns Victoria’s Secret and Bath & Body Works, said it would furlough most store staff and “those who are not currently working to support the online businesses or who cannot work from home” starting April 5. Nordstrom said last week that it would furlough “a portion of corporate employees” on April 5 for six weeks. Buzzy start-ups are also under pressure: Rent the Runway laid off its retail employees through a call via Zoom on Friday, while Everlane laid off or furloughed nearly 300 of its workers.

The number of workers affected is significant. L Brands has 94,400 employees, according to the company’s most recent annual filing. Ascena Retail, which owns Ann Taylor and Lane Bryant, said on Monday that it was furloughing all its store employees and half its corporate workers, which amounts to about 90 percent of the company’s 43,000 employees.

Kohl’s, which employed an average of 122,000 associates in 2019, said on Monday that it would furlough about 85,000 of them. Guitar Center also said that it was furloughing 9,000 store employees.

“Analysts have feared that if these kinds of sales declines we’re seeing now persist, retailers are going to have to take very significant action, including the type of thing we’re seeing today just to make it through the situation,” Jay Sole, a retail analyst at UBS, said. “I think we’ll see a lot of retailers follow suit.”

Many apparel and accessories retailers were already under pressure before the global pandemic. E-commerce has upended shopping habits and the gap between America’s most popular and least favored malls has continued to widen. Bankruptcies last year included big names like Forever 21, Barneys New York, Payless ShoeSource and Charlotte Russe. Chains like Pier 1 and Modell’s Sporting Goods filed for bankruptcy this year.

“This only makes what is a tough situation even tougher,” Mr. Sole said, adding that labor costs are often a retailer’s biggest expense.

Cutting largely part-time, nonunion workers may be the easiest cost-saving move for retailers. And by furloughing employees, instead of laying them off, the retailers could potentially speed up the return to business because, in theory, they would not have to hire a new staff.

Of course, many workers, in need of jobs and unable to survive on unemployment benefits, will look to find other jobs over the next few months. As department stores and apparel sellers are shedding employees, retailers focused on food and households staples like Walmart, CVS, Kroger have said they plan to hire hundreds of thousands of additional workers to keep up with the demand for essential goods.

“The strong retailers are getting stronger, and the least strong are going to lose,’’ said Craig Johnson, president of Customer Growth Partners, a retail research and consulting firm.

But not every furloughed employee will be able to find a new position somewhere else, adding to the broader financial strain felt by many Americans.

The cuts were not limited to store employees. Gap, for example, said that it planned to reduce the number of its corporate employees around the world.

Employees in jobs that support online sales, including call center positions and distribution center roles, were largely spared from the furloughs. A Kohl’s representative said that many of its locations would continue to ship products from stores and offer curbside pickup. Kohl’s noted it had provided two weeks of pay to store and store distribution center associates and said that it would “continue to provide existing health benefits to furloughed associates at this time, and those impacted may benefit from the recently passed coronavirus stimulus legislation.”

Retailers stressed that they had already made other cost cuts before turning to their workers. Macy’s said it has decided to scale back to “the absolute minimum work force needed to maintain basic operations” after first taking actions including drawing down its credit line, suspending its dividend and halting capital spending.

Furloughed staff receiving health benefits would retain coverage through May, the company said, adding that it would cover all of the premium costs. A representative for the union representing Macy’s workers in New York City said that relatively few workers nationally use the company’s health benefits because the plan is costly.

L Brands, which is in the process of selling Victoria’s Secret in a deal that is expected to close in the second quarter, had previously suspended its dividend and drew $950 million from its revolving credit line.

The layoffs and furlough announcements are likely to continue, as many retailers owe rent payments on Wednesday. Many companies are desperately trying to conserve cash as they max out their credit lines and encounter landlords who are taking a hard line on payments.

Last week, Taubman, a large owner of shopping malls, sent a letter to its tenants saying that the company expected them to keep paying their rent amid the crisis. Taubman, which oversees well-known properties like the Mall at Short Hills in New Jersey, reminded its tenants that it also had obligations to meet, and was counting on the rent to pay lenders and utilities.

“People are making choices and it is all tied to financial survival,” said Kenneth S. Lamy, founder and chief executive of the Lamy Group, a consultant to retail landlords.

Venture-backed start-ups that have promised new retail models have not been immune to the challenges that the industry is facing.

Everlane, the apparel start-up known for its transparency regarding where and how its clothing is made, said on Friday that it laid off 222 employees who worked in customer experience and part-time in retail, and furloughed 68 full-time retail employees. It offered two weeks of severance.

A representative for Rent the Runway did not specify how many employees were affected by its “retail role eliminations.” The start-up, which lists four stores on its website and a location at a West Elm store, said it was aiming for a seamless transition with “compensation, severance and continuation of health insurance coverage.”

Contact Sapna Maheshwari at sapna@nytimes.com and Michael Corkery at michael.corkery@nytimes.com.

What does a bear-market ‘cleanse’ actually mean?