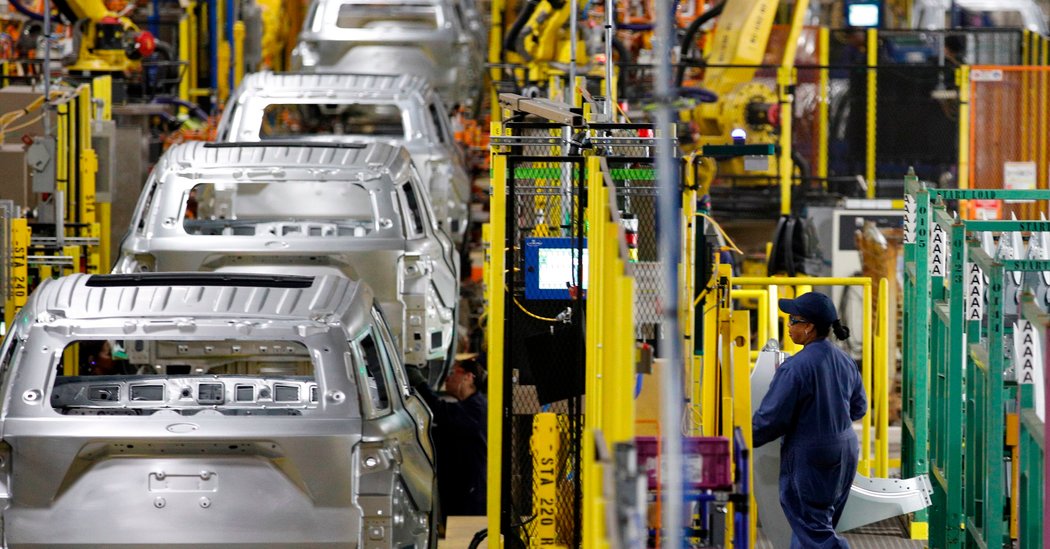 The United Automobile Workers union said Tuesday night that the three Detroit automakers had agreed to address concerns about coronavirus hazards to factory workers by taking steps short of shutting down U.S. production.

General Motors, Ford Motor and Fiat Chrysler had been resisting calls by the union to shut down their plants for two weeks to minimize the spread of the virus among factory workers. In separate meetings with the U.A.W. on Tuesday evening, the union said, the companies promised a variety of measures to keep workers apart inside factories and to extend time for cleaning work stations and common areas.

“All three companies have agreed to new measures that will increase adherence to the C.D.C. recommendations on social distancing in the workplace,” the U.A.W. president, Rory Gamble, said in a statement, referring to the Centers for Disease Control and Prevention.

He added that the three companies had agreed to partial shutdowns at certain times to allow for thorough cleaning of plants and extended periods between shifts. Shift schedules at some plants may be altered to reduce the number of workers entering each day.

G.M., Ford and Fiat Chrysler each said they would provide details this week.

“The health and safety of our work force is our top priority,” Ford said in a statement. “We’re working closely with the U.A.W. and are aiming to announce details in the next 24 hours.”

The automakers together employ about 151,000 U.A.W. workers.

In an email sent to members earlier on Tuesday, Mr. Gamble said he had requested a two-week factory shutdown in a meeting on Sunday with the chief executives of the three companies, whose continued operation of U.S. factories has been in sharp contrast to the move by automakers in Europe to shut down manufacturing.

“Your U.A.W. leadership feels very strongly, and argued very strongly, that this is the most responsible course of action,” Mr. Gamble said in the email. “The companies, however, were not willing to implement this request.”

The union and the Detroit automakers formed a task force on Sunday to address how to protect workers during the coronavirus outbreak. The group includes Mr. Gamble and three chief executives — Mary T. Barra of G.M., Jim Hackett of Ford and Mike Manley of Fiat Chrysler — as well other union officials and the manufacturing and health executives from the companies.

In his email, Mr. Gamble suggested that the union was prepared to increase pressure on the carmakers if they did not agree to a shutdown.

“These companies will be put on notice that the U.A.W. will use any and all measures to protect our brothers and sisters,” he wrote.

Jim Cain, a G.M. spokesman, said the company was trying to keep factory workers safe while being mindful of the potential economic impact of a broad shutdown and of the hardship employees could face if they were no longer earning paychecks.

“It’s not just workers, but it’s suppliers,” he said, noting that the auto industry represents “billions of dollars of value” to the U.S. economy. “The longer we can keep working, the better off everybody is,” he said.

Automobile and auto-parts manufacturing makes up about 4 percent of the U.S. economy.

G.M., Ford and Fiat Chrysler have all restricted domestic and international travel and told office workers to work remotely.

G.M. has reported one coronavirus infection in its work force, at its technical center in Warren, Mich. The company said it had a medical team assisting the employee’s family and had told others who have been in contact with the affected employee to isolate themselves for 14 days.

“The health and safety of our employees is our top priority,” the company said in a statement.

Workers at a Ford truck plant in Dearborn, Mich., filed a written grievance against the company on Monday, calling for a shutdown of U.S. factories.

“There’s a lot of concern, just like all across the nation,” said Todd Dunn, president of U.A.W. Local 862, which represents workers at two Ford truck plants in Kentucky. He said many members of his local were scrambling to be able to get to work because day care centers in Kentucky had been ordered closed.

Mr. Dunn said he and his members worried both about the spread of the virus and about the prospect of losing income. “People still have to pay their mortgages,” he said.

On Tuesday, Ford joined Daimler, Nissan, Volkswagen and other major carmakers in shutting down manufacturing operations in Europe.

Ford said the suspension would take effect Thursday and last “for a number of weeks” depending on the spread of the pandemic, as well as disruptions to supply chains, government restrictions on travel, and declines in sales.