Trump pushes back against congressional oversight for $500 billion bailout fund 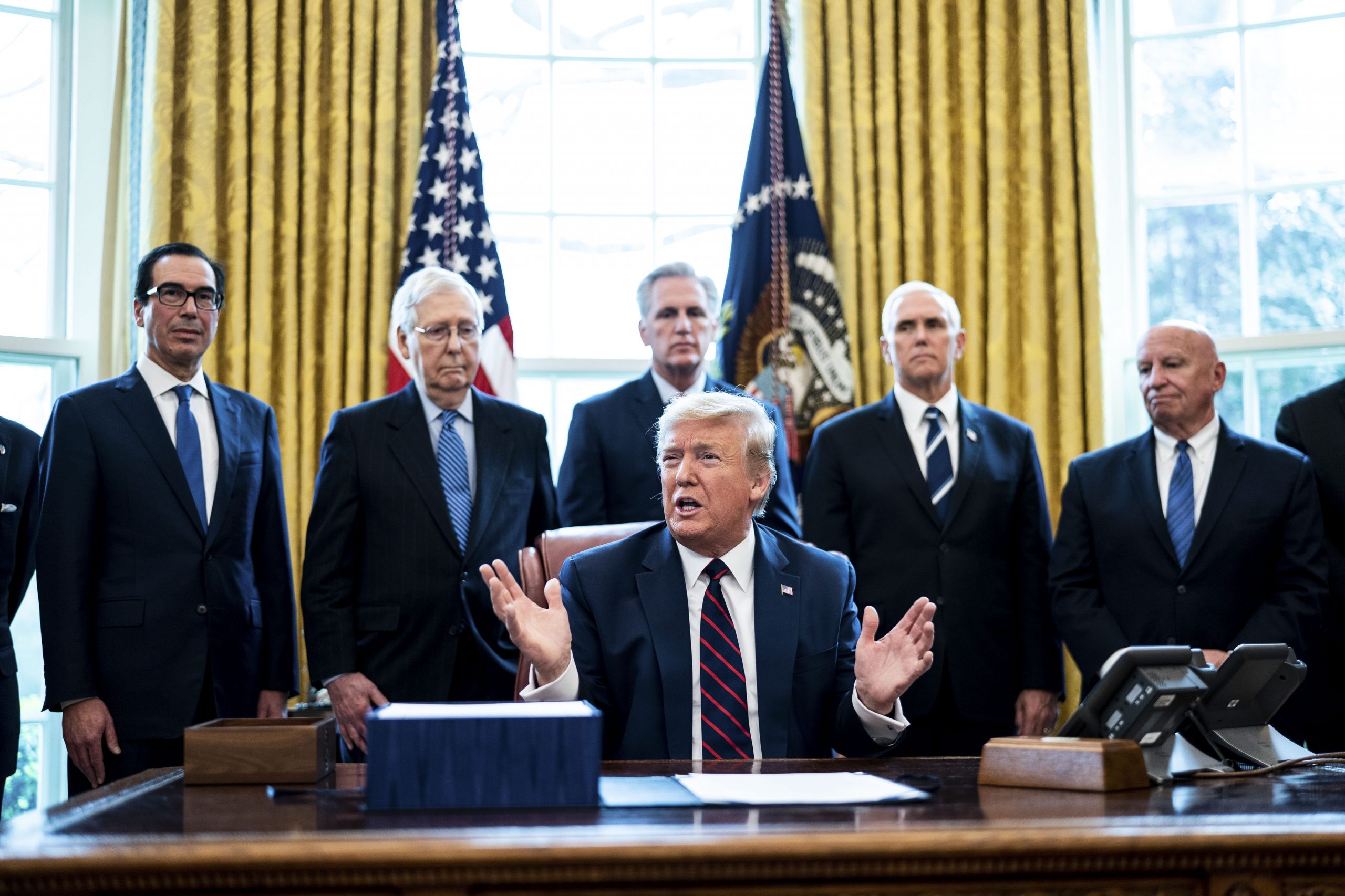 Treasury Secretary Steven Mnuchin and President Donald Trump attend briefing about the coronavirus outbreak in the press briefing room at the White House on March 17, 2020 in Washington, DC. The Trump administration is considering an $850 billion stimulus package to counter the economic fallout as the coronavirus spreads.

President Donald Trump on Friday wrote in a signing statement accompanying the $2 trillion stimulus bill that he believes the inspector general overseeing a $500 billion relief fund for businesses will not have as much regulatory power as Democrats had sought.

The bill includes a $500 billion fund that companies, such as the struggling airlines, can tap to support their business. The fund is overseen by Treasury Secretary Steven Mnuchin. In original drafts of the Republican Senate bill, Mnuchin had wide discretion in overseeing that money. After criticisms from Democrats, Republicans agreed to add on a congressional oversight committee and Inspector General as added control measures.

The language gives the Inspector General power to report back to Congress information including the nature of the loan and its recipients. It has the power to make informational requests from other agencies “to extent practicable and not in contravention of any existing law.” It is required to let Congress know if those requests are blocked.

Trump, though, said Friday he believes the Inspector General needs his permission in order to make such reports to Congress.

“I do not understand, and my Administration will not treat, this provision as permitting the [the Inspector General] to issue reports to the Congress without the presidential supervision,” he wrote in a signing statement. A signing statement indicates how the president intends to interpret a law.  Trump has a record of seeking to withhold information from Congress, most notably during the recent House Intelligence Committee’s probe of his dealings with Ukraine. He likewise fought efforts by House committees to subpoena his financial records

Oversight of that $500 billion fund was one of the last major sticking points in Senate negotiations, CNBC previously reported. Senate Democrats cheered the ultimately agreed-upon language as a victory. They were wary of repeating the mistakes of the bank bailout after the financial crisis, in which Democrats were criticized for allowing bank executives to reward themselves with bonuses after receiving federal money.

“The president’s statement is indicative of the difference between Democrats and Republicans when it came to this bill,” House Speaker Nancy Pelosi told MSNBC’s Rachel Maddow on Friday about the language.

“It’s not a surprise to anyone,” she said of Trump’s signing language. “But Congress will exercise its oversight — and we will have our panel appointed by the House to, in real-time, make sure we know where those funds are being expended.”

A Senate Democratic aide said, “We fully anticipated Trump shenanigans, so that’s why there are multiple layers of strict oversight in this bill, including a council of existing inspectors general and GAO review, in addition to the Special IG, reporting requirements and a Congressional Oversight Commission.”

Trump’s Friday declaration is one of many statements from the administration in recent days that highlight the lingering questions about the $500 billion fund. Emergency loans could equate to more than $4 trillion in lending power through the leverage of the Federal Reserve, administration officials have said.

After the Senate added language to the stimulus bill that effectively excluded the ailing cruise lines from aid, Trump told reporters earlier this week he may seek ways to get them money.

“We’re going to work very hard on the cruise line business and we’re going to figure something out,” the president said. Trump has previously indicated his support of the industry and Carnival chairman Micky Arison.

Because airlines are the only businesses to get direct payments, as a result of their dire financial situation, those payments come with conditions including warrant provisions.

Trump indicated on Friday the government may take advantage of those warrants or other means of obtaining equity stakes.

“Will we end up owning large chunks, depending on what these geniuses decide along with executives of different companies — its possible. And they’ll make a better deal on the loan,” Trump said.

What that means for Boeing, the only domestic airline manufacturer, is unclear. The bill allocates $17 billion in loans and guarantees for companies important to national security − a provision that sources say Boeing is eligible at least in part for. Boeing has said it will not accept any money that requires giving up an equity stake, but the administration keeps implying that may be its only option.

But Trump has repeatedly offered his intent to support the company.

“Boeing will probably need a hand, and we’re going to bring Boeing back to health,” Trump said at a Friday briefing of the coronavirus task force.

Meanwhile, Trump told reporters Friday the administration has been talking to “the most brilliant financial minds in the world” about helping with the bailouts, including Blackrock’s Larry Fink.

The New York Federal Reserve recently disclosed it has retained BlackRock as an advisor and asset manager in three financing programs. A person familiar with BlackRock said Fink doesn’t comment on discussions with public officials. A spokesperson for Blackrock declined to comment.

United Airlines warned on Friday that despite government aid, it expects layoffs or furloughs down the line, as demand for travel stays weakened.  As a condition of financial relief, United and all airlines accepting aid agreed to withhold from furloughing or cutting the pay of their workers through Sept. 30. United executives committed to that on Friday.

CNBC’s Christina Wilkie and Leslie Josephs contributed to this report