Trump Declared a National State Emergency Over Coronavirus. Here’s What that Can Do 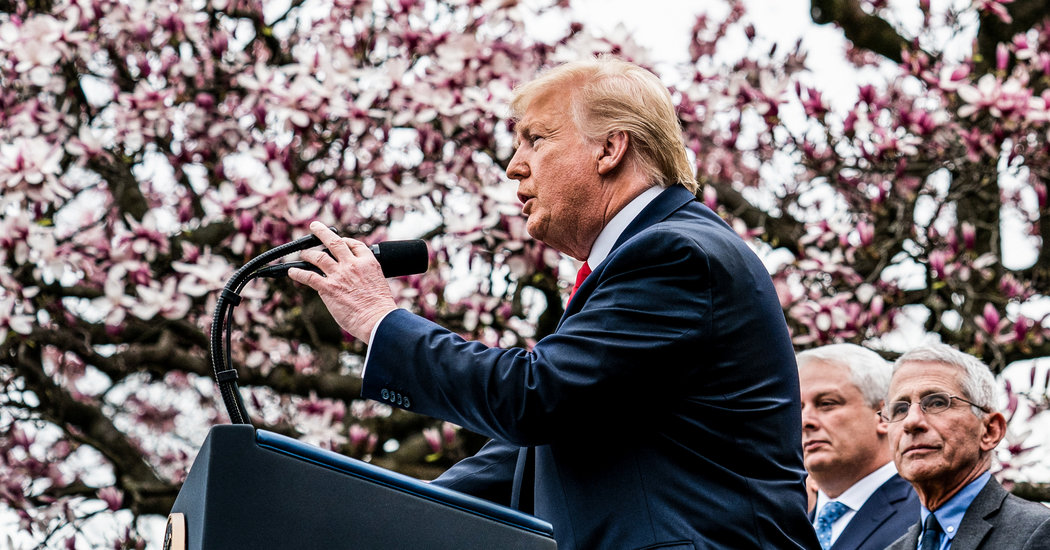 WASHINGTON — President Trump on Friday signed an emergency declaration over the coronavirus pandemic, unlocking certain government powers to deal with the public health challenge. Here’s a breakdown of what that means on a legal and practical level.

What is emergency power?

It’s special authority that a president can unlock and use in exigent circumstances.

Congress has enacted more than 100 laws that permit a president to declare that emergencies exist, freeing the government from abiding by some of its usual legal constraints. This flexibility can include permitting the federal government to spend additional funds, including to aid state and local governments, and temporarily lowering legal barriers to certain actions.

In some cases, an umbrella law called the National Emergencies Act that regulates how presidents can use exigent power must be invoked to use another, setting up a complex cascade of effects. In public health, emergency power laws include provisions of the Public Health Service Act, the Stafford Act, the Social Security Act and other statutes.

How does a Stafford Act emergency work?

It frees up federal funds and other resources to help when “federal assistance is needed to supplement state and local efforts and capabilities to save lives and to protect property and public health and safety.”

The Stafford Act is the government’s main mechanism for responding to major disasters and emergencies. It permits tapping into an account that currently has more than $40 billion, which it could use to do things like buy medical supplies and equipment.

If a president grants a declaration, the Federal Emergency Management Agency can coordinate a response. The act also empowers the president to direct any federal agency to use its personnel, facilities and equipment to support state and local emergency efforts, disseminate public health and safety information, provide public health and safety measures, and distribute supplies like medicine and food.

While the Stafford Act is more often activated in cases of major disasters that cause property damage, like hurricanes and floods, it has also been used in public health emergencies. In 2000, President Bill Clinton used it to cover mosquito control operations in New Jersey and New York during the outbreak of the West Nile virus.

Wasn’t there already an emergency determination?

Yes, but it was under a less sweeping law.

On Jan. 31, Alex M. Azar II, the secretary of Health and Human Services, determined that an emergency existed under the Public Health Service Act. The determination made it easier for state and local health departments to temporarily reassign personnel whose salaries were funded through federal public health programs, freeing them from regular duties to help respond to the pandemic.

What about the Social Security Act?

Mr. Trump’s move will also unlock extra powers under Section 1135 of the Social Security Act aimed at making it easier to get medical supplies and doctors and nurses where they are needed most.

The provision permits waiving requirements in Medicare, Medicaid and the Children’s Health Insurance Program that normally apply. The waivers include payment limitations on using out-of-network providers, certain certification requirements and a federal mandate that doctors be licensed in the state in which they are practicing.

At his news conference, Mr. Trump gave an example of “telehealth,” or letting doctors in one state consult online with patients in another state.

The waiver power under the Social Security Act requires both a determination under the Public Health Service Act by the health and human services secretary and a presidential declaration under either the Stafford Act or the National Emergencies Act.

In 2009, President Barack Obama declared a national emergency — under the latter law rather than using the Stafford Act — in part to unlock Section 1135 powers as part of the government’s response to the H1N1 epidemic, also known as the swine flu.

Is this different from the emergency Trump declared over the border wall?

Yes, at least as a matter of policy substance and politics.

Serious commentators agree that the coronavirus pandemic presents a true emergency and fits within the intent of Congress in creating national emergency powers laws. But Mr. Trump’s claim that an emergency existed at the border that could be solved by a wall was widely disputed.

Mr. Trump’s coronavirus emergency declaration, in contrast to his Mexico border wall declaration, fit the purpose of emergency powers laws, said Elizabeth Goitein, a co-director of the Liberty and National Security Program at the Brennan Center for Justice at the New York University School of Law. She oversaw a study in 2018 of presidential emergency powers.

“In contrast to the situation at the border wall, which was in no way an emergency and the president’s declaration went against Congress’s will,” she said, “this is a situation where we face a true emergency and members of Congress have actually been encouraging the president to take this action.”

Fed Moves Toward Another Big Rate Increase as...