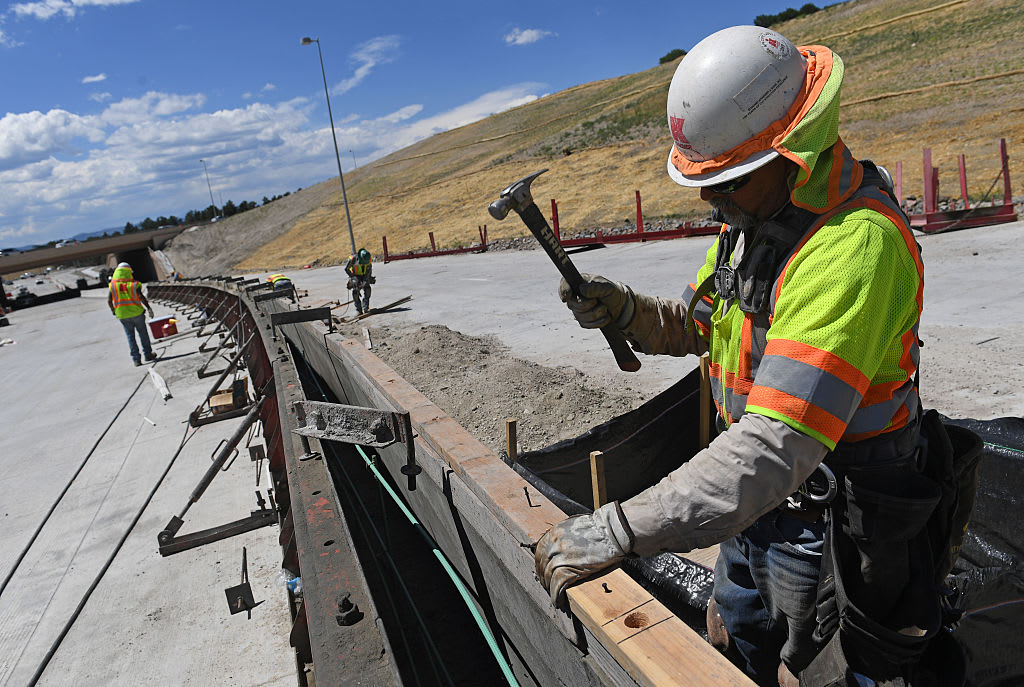 Sergio Hernandez works on the median just east of the new I-25 interchange in Castle Rock, Colorado.

Four days after signing an unprecedented $2 trillion relief bill to blunt the economic damage from the coronavirus pandemic, the president on Tuesday called for the U.S. to spend another couple trillion bucks on a massive infrastructure package. In a tweet, he wrote that “this is the time” to craft an infrastructure overhaul with U.S. interest rates at zero during the crisis.

“It should be VERY BIG & BOLD, Two Trillion Dollars, and be focused solely on jobs and rebuilding the once great infrastructure of our Country! Phase 4,” the president said, referencing the three pieces of emergency legislation lawmakers have already passed to combat the outbreak rampaging across the U.S.

Trump has long pushed for a proposal to revamp American roads, bridges and airports, and Democratic congressional leaders saw the issue as a key area where they could cooperate with the Republican president when he first took office. But efforts so far to put together a sprawling infrastructure plan have fallen apart.

In April 2019, Senate Minority Leader Chuck Schumer said Trump and Democrats agreed on the outline of a $2 trillion package. Trump then walked out of a May infrastructure meeting, saying he would not work with Democrats on the issue while they investigated his administration.

Circumstances have changed: the House impeached Trump in December and the Senate acquitted him in February. COVID-19 has shredded the U.S. economy, jammed hospitals and stretched stores of health care equipment, making federal intervention more appealing across the ideological spectrum.

In interviews this week, House Speaker Nancy Pelosi has pushed for infrastructure investment as part of the next phase of the federal response. She wants components related to both health care and the digital economy.

Schumer, meanwhile, has pushed for a “Marshall Plan” to strengthen the U.S. public health infrastructure. He has touted emergency funding for hospitals and equipment included in the $2 trillion package signed into law last week.

Republicans — who control the Senate — may not have an appetite for more historic federal action after passing the largest emergency spending measure in U.S. history last week. Spokespeople for Senate Majority Leader Mitch McConnell and House Minority Leader Kevin McCarthy did not immediately respond to requests to comment on Trump’s tweet.

At least one Senate Republican cheered Trump’s call for infrastructure improvements — though he did not endorse spending $2 trillion. Sen. John Barrasso, R-Wyo., called Tuesday to pass an existing bipartisan Senate highway bill that is “ready to go.”

Both the House and Senate are not expected to return to Washington before April 20.

The calls for another relief package come as COVID-19 continues to spread across the country. The U.S. now has more than 164,000 cases of the disease, easily the most in the world, and at least 3,170 deaths have been linked to it, according to data compiled by Johns Hopkins University.