Tom Rogers on the life and legacy of Jack Welch, former GE CEO 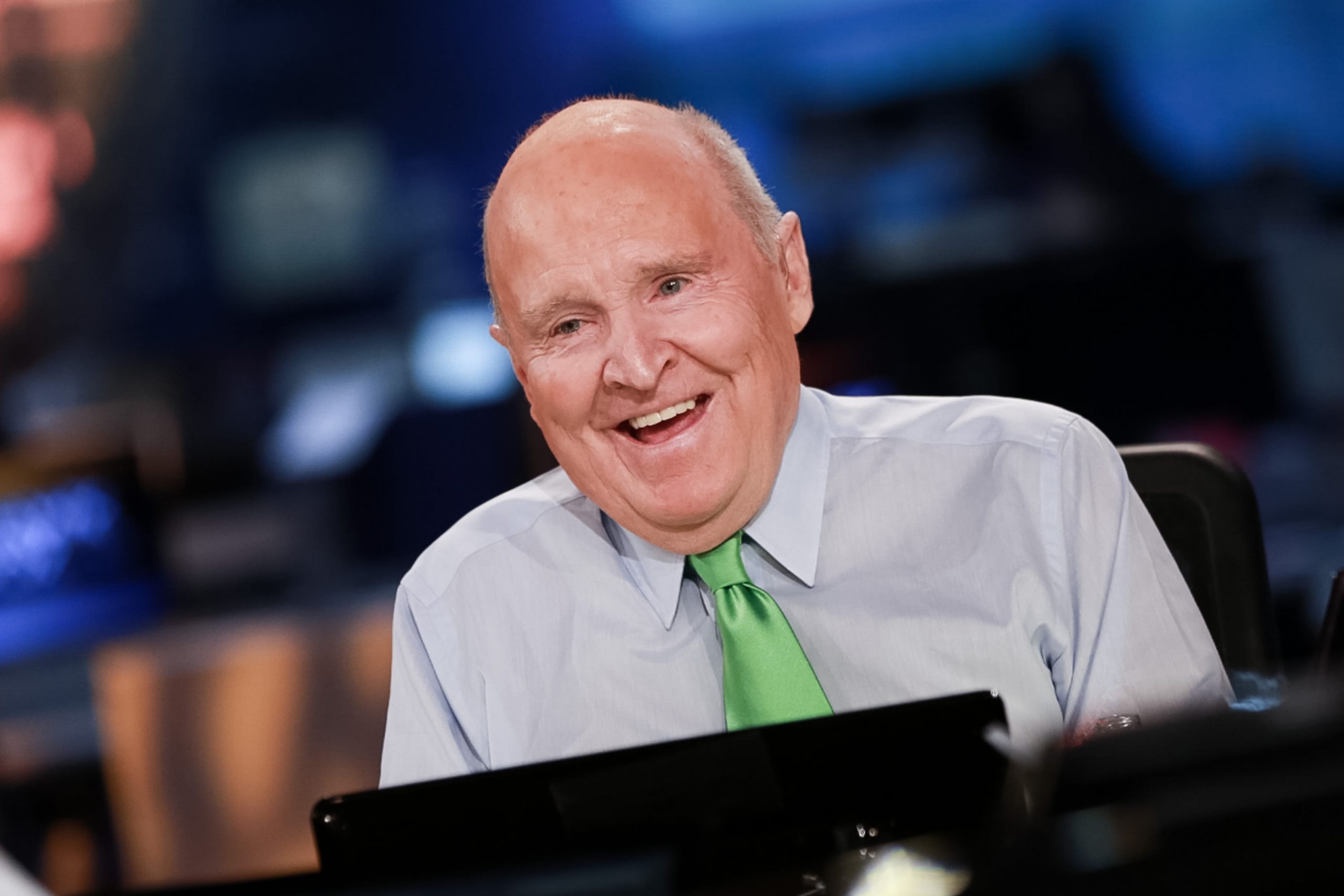 A competitive leader, an encouraging mentor and a good friend.

Jack Welch, the legendary chief executive and management guru who died this week at age 84, was all those things and more to Tom Rogers, who helped revolutionize the cable television industry in the 1980s and ’90s.

Rogers was among the business leaders, family and friends at Welch’s funeral Thursday at New York’s St. Patrick’s Cathedral, paying homage to the man who was once known as the “manager of the century.”

“There are very, very, very few people in the world whose aura and life are as big as St. Patrick’s Cathedral is in size and scale,” Rogers said. “Jack is one of the very few who could fill the giant space.”

Welch led GE from 1981 to 2001, growing its market value from $12 billion to $410 billion and overseeing hundreds of acquisitions.

Rogers, 65, worked with Welch for many years after General Electric in 1985 acquired RCA — then the owner of NBC — and hired Rogers. The two became close as Rogers led NBC Cable, forging deals and new partnerships under Welch’s tutelage. Rogers, who founded CNBC and MSNBC and later became CEO of TiVo, summed up Welch’s business philosophy as a trio of guiding beliefs.

“The ones that most captured his thinking were the three principles of speed, simplicity and self-confidence,” said Rogers, now executive chairman of WinView Games, a Silicon Valley company that created a platform joining components of TV sports, social media, gaming and mobility.

Rogers was working as a telecommunications lawyer for a House of Representatives subcommittee when he met Welch.

“Jack was making the rounds on Capitol Hill, because GE was looking to acquire RCA,” Rogers said. “We met a couple times about that transaction … and, when it was all over, he called me up.”

“And Bob said, ‘nobody knows this yet, but I’m going to become president of NBC when the transaction closes,'” Rogers said. “Bob then said, ‘Jack thought we should meet because you know everybody in the cable industry.'”

Rogers was interested in joining NBC but told Welch he didn’t want to become a GE lobbyist. The pair had several conversations and, in the end, Welch made sure Rogers got the roles he attained at NBC.

“Jack Welch at that point was obviously already celebrated as a uniquely first-rate CEO and, the more I talked to Jack, the more impressed I was with what his designs were for NBC,” Rogers said.

Welch earned two titles after he broke through GE’s bureaucracy: “manager of the century” and “Neutron Jack,” the latter for slashing tens of thousands of jobs. Rogers said Welch hated the nickname, which alluded to the bomb that’s designed to kill multitudes without destroying cities.

“I don’t think there’s any doubt that he looked to de-layer companies,” Rogers said. “He thought the biggest problem that burdened companies and slows them down was too many layers.”

But getting rid of people wasn’t the point of Welch’s de-layering, Rogers continued. Welch wanted to build companies and focus on growth, and that meant “not being bureaucratic, and speeding up a company’s ability to make decisions,” Rogers said.

“Just make sure when you do it all, you do it efficiently. So that’s why the neutron bomb analogy just didn’t work,” Rogers added.

Rogers put it simply: “CNBC would not have happened without Jack.”

When Rogers joined NBC, the top name in cable television was CNN pioneer Ted Turner. But, after the stock market crash of 1987, Rogers said, “Turner was really hurting” and came to Rogers about NBC making a major investment in CNN. According to Rogers, Wright thought joining forces made sense.

“But we had to sell Jack on this idea,” Rogers said. “He was a little skeptical but said he’ll meet with Ted Turner.”

That meeting went poorly from Welch’s point of view.

“Jack came out of that meeting and said to me, ‘We’ve got to find our own path into cable. We’re not going to do it through another company with a guy like this running the company,'” Rogers said.

While Rogers had wanted to start a general cable news channel to compete with CNN, he knew he needed to “get the support of the cable industry.”

“I decided that business news was where we could make our mark,” Rogers said. “I knew enough about Jack at that point and not only knew he was the ultimate CEO, but he was also the ultimate business junkie. There was nobody who followed business news and ate up what was going on in the business world like Jack did. I knew it would be something he had personal affinity toward.”

“So that’s where the idea of CNBC came from,” Rogers added.

Rogers recalled that CNBC grew to about 18 million subscribers in its first few years, which put “an enormous amount of pressure” on a preexisting business channel call FNN. He said Turner tried to buy FNN, intending to compete with CNBC, as Turner “had gone from thinking we might be partners to totally paranoid about us.”

Turner did not immediately reply to a CNBC request for comment.

FNN wound up in bankruptcy but had about 30 million subscribers, so Rogers put together a pitch to Welch arguing why NBC should acquire more business news assets.

“If we put this together, we’re going to own this area,” Rogers said. “No one’s going to be able to touch us.”

He said he “pitched the hell out of this to Jack,” convinced it was how NBC would make its mark on cable TV. Welch was hesitant at first but Rogers said Welch gave him a chance to make it happen.

But then Wall Street Journal owner Dow Jones decided it wanted to own FNN and waged a challenge to GE in bankruptcy court.

But when Rogers went to the Dow Jones leadership, he said, they told him they didn’t think GE would be a good partner. Instead, Dow Jones planned to acquire FNN and partner with Westinghouse.

“I took that back to Jack and Jack’s basic answer was, ‘You’re going to beat these guys in bankruptcy court,'” Rogers said. “It was very important to him that it was clear that nobody could outbid GE.”

With CNBC and FNN combined, Rogers put into action Welch’s vision for what reporting on businesses and the economy could be.

Rogers credited Welch with protecting his cable TV unit, even as “a lot of people were trying to stab me in the back.” But CNBC by the 1990s was clearly “on a success path,” Rogers said, so he was looking for a way to grow further. To do so, he created “America’s Talking,” a general news channel that began to pick up traction among cable distributors.

“I’m out there trying to figure out how we create more cable value for ourselves and I pick up in the market that Bill Gates and Microsoft is talking to Ted Turner about taking a position in [CNN],” Rogers said. “And I said, ‘Holy crap! If Microsoft goes in with Turner, we’re going to have an enormous new capability to go up against.”

Rogers began to put together a plan to woo Microsoft’s business, with Welch suggesting that NBC offer “America’s Talking” as a possible partnership.

“He was always thinking, if there’s somebody else who can absorb losses here rather than GE, that’s a good thing,” Rogers said.

MSNBC was born out of “America’s Talking,” with Microsoft bringing an internet enterprise to complement NBC’s on-air reporting.

“Jack loved the deal, as it had Microsoft paying the full freight for the losses that MSNBC would incur. And at the same time, our devoting of NBC News resources would mean it became kind of a cable flagship channel of NBC News,” Rogers said.

On the other side of the table, “Gates didn’t really understand the media industry,” Rogers said. The balance of the financial weight-bearing between GE and Microsoft became apparent when MSNBC had its first board meeting, which Rogers said was himself, Welch, Wright, NBC’s Andy Lack and Gates with his own team.

“We laid out the numbers about who was paying for what, and Bill Gates started screaming at me across the table: ‘This is ridiculous!'” Rogers recalled.

Rogers said he began to attempt to rationalize the deal with Gates but stopped when Welch kicked Rogers under the board room table.

He sat through the rest of the meeting thinking Welch was “all pissed off at me” for talking back to Gates. But, after Gates and his team left, Welch turned to Rogers.

Gates did not immediately reply to a CNBC request for comment.

Overall, Rogers said his biggest takeaway from his times with Welch was a lesson that he believes applies to any business of any size.

“Any idiot can manage a business for the short term and maximize short-term revenue and profit. And any idiot can manage a business for the long term and just think about long-term strategy and take their eye off the short-term metrics of the business,” Rogers said. “A real manager is someone who manages for the near term and the long term at the same point. That you’ve always got your eye on how to maximize the short-term potential while driving the long-term potential of the business. And it really is that combination of bringing financial discipline to a really significant, long-term strategic view of where the market’s going, and how you drive your position in that market.”

Correction: This story was revised to delete an incorrect reference to Westinghouse’s relationship with CBS at the time Dow Jones planned to acquire FNN.

Subscribe to CNBC PRO for exclusive insights and analysis, and live business day programming from around the world.