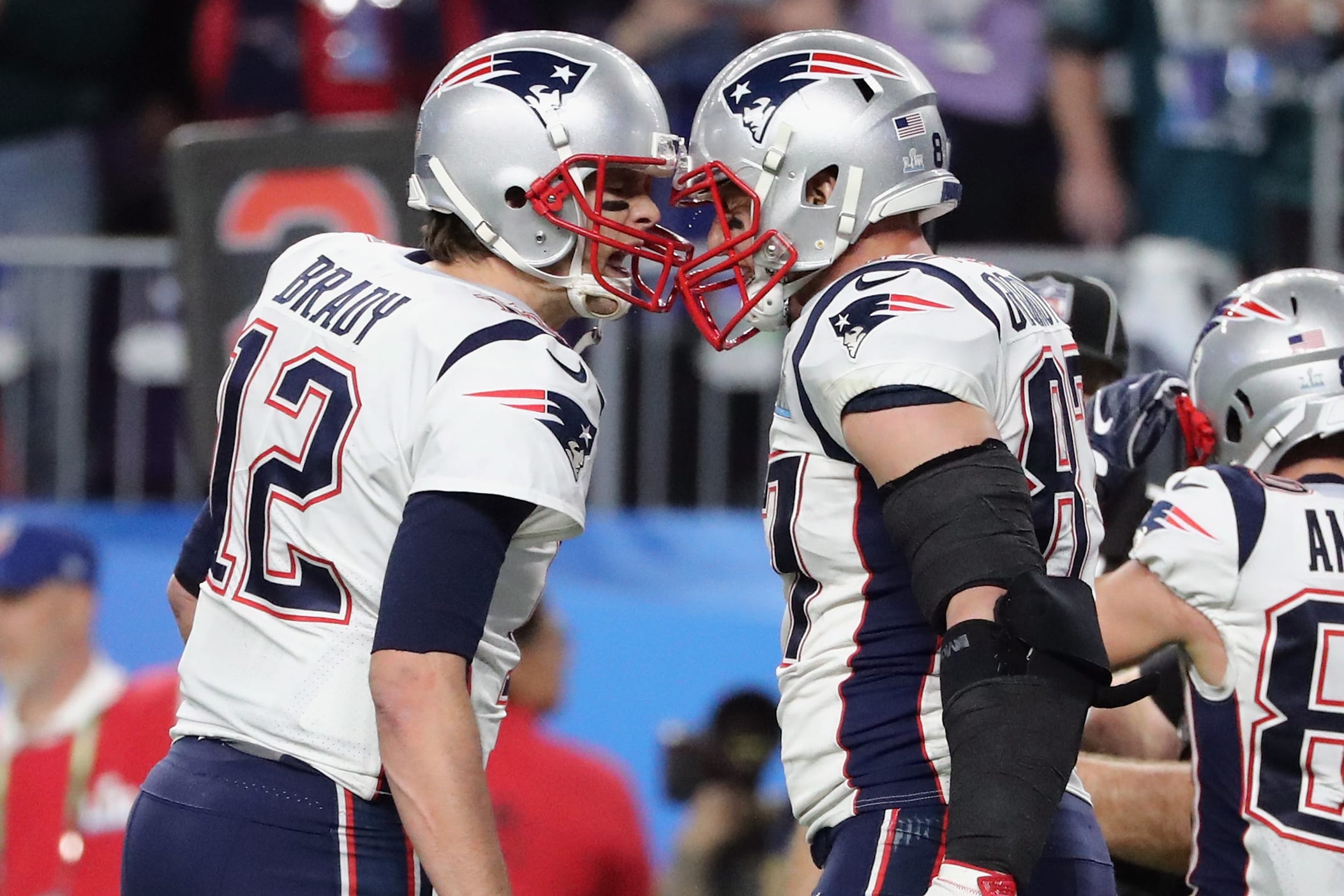 Tom Brady #12 and Rob Gronkowski #87 of the New England Patriots on February 4, 2018 in Minneapolis, Minnesota.

Joe Montana, Brett Favre and Peyton Manning could all lay claim to the “greatest quarterback of all time,” which is what New England Patriots head Bill Belichick labeled Tom Brady shortly after he announced his departure from the team on Tuesday. Brady will now join the three of them in trying to forge a second career with a new team, after carrying the Patriots to nine Super Bowls, including six wins.

“Tom lived and perpetuated our culture,” Belichick said in a statement.

Now Brady is expected to take that “tone-setter” attitude to the Tampa Bay Buccaneers. Multiple reports say the six-time Super Bowl Champion agreed to terms with the Buccaneers, where he will join head coach Bruce Arians. NFL.com reported the deal is worth $30 million per season.

It’s a move that on paper looks compelling, but also one faced with early skepticism.

“His big phrase is, ‘No risk it, no biscuit,’ which means if you don’t stand in there and make big throws, you’re not going to get the big reward,” said Simms, who is currently an analyst for NBC’s Football Night in America. “That’s a tough thing to ask a 43-year-old quarterback all the time. I don’t know if that is realistic.”

Simms added he’s noticed Brady’s “reluctancy to hold the ball and take a shot to maybe deliver a 20 or 25-yard throw down the field.”

“He can expose some cultures because he’s going to go, ‘This is not right; this is not working,'” Simms said in an interview with CNBC. “You have to be willing to take on the spectacle of what Tom Brady is… He’s going to dominate the locker room.”

Arians has a history of working with elite quarterbacks. He spent three seasons (1998-2001) as the quarterback coach with the Indianapolis Colts working with Manning, and also worked with Pittsburgh Steelers Ben Roethlisberger as offensive coordinator for five seasons (2007-11).

NFL Network analyst Brian Baldinger played 11 seasons in the league as an offensive lineman protecting quarterbacks like Brady. He said Arians is a player’s coach, undoubtedly different from Belichick’s style.

Baldinger thinks the two will gel.

“He wants to have some fun,” Baldinger said of Brady. “I mean you can talk to Bruce Arians ten minutes before kickoff and he’s going to throw a joke at you. He’s going to have a smile on his face. He’s a very confident man in what he knows and what he does.”

Though Baldinger feels the Bucs adding Brady will be a good fit, he acknowledges there will be some adjustments from both sides. And Brady’s new teammates will also need to get used to a change in leadership style.

“He’s always going to be demanding,” Baldinger said. “Before [Julian] Edelman became Edelman, I seen [Brady] chew Edelman out to the point where – Edelman sat on the end of the bench like when we were back in grade school – he went and stood in the corner. We’ve seen a lot of receivers come and go [in New England] because they couldn’t handle it.”

The Bucs have the offensive firepower to surround Brady. Wide receivers Chris Godwin and Mike Evans both finished with at least 60 catches and 1,000-plus reception yards and a combined 17 touchdowns. And running back Ronald Jones was third on the team in yards from scrimmage (1,033), only trailing Godwin and Evans.

“You’ll find out how good some of these guys are pretty quick when they start playing with Brady,” Baldinger said.

But the Bucs will need to address their offensive line, which allowed 47 sacks (11th-most allowed) in the 2019 season. Baldinger said the team should use their upcoming first-round draft pick on an offensive lineman to help protect their 43-year-old star.

Baldinger said the “challenge” would be learning how to apply Brady’s championship experience to Arians’ coaching style.

“When you open up Tom Brady’s brain – 20 years of football comes pouring out of it,” Baldinger said. “He can call any play from any era to fix an issue or make a first down or win a game. You can’t expect [younger players] to understand his 20 years of experience and think it would be foolish of Tom to try and demand that from anybody.

“It’s not going to be New England culture, and I think Tom Brady knows that,” Baldinger continued. “And I think it’d be foolish of him to try to round-up the troops and say, ‘This is the way to do it; this is the only way.’ There other ways to win.”