The National Labor Relations Board grants a reprieve to inflatable rats. 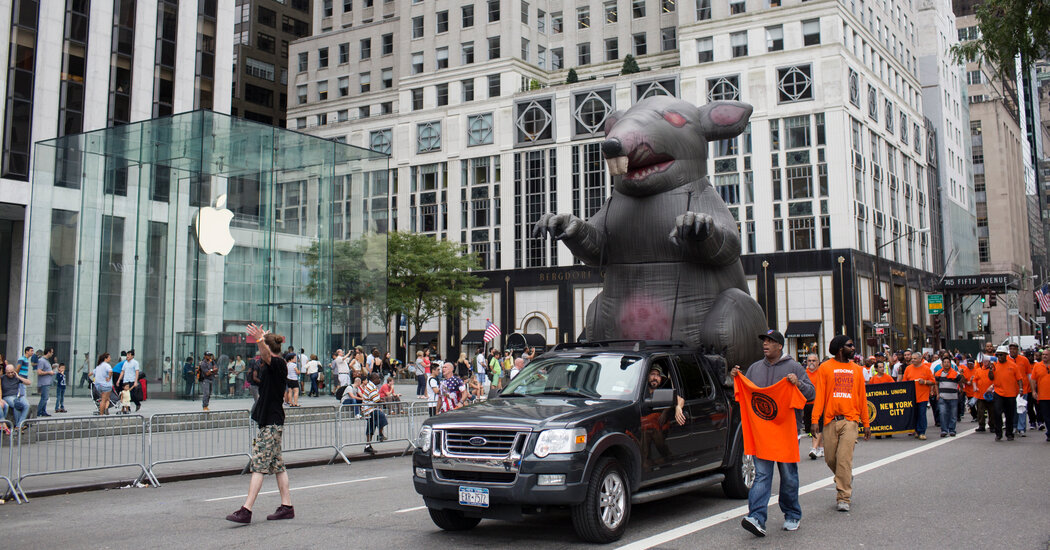 It turns out that inflatable rodents may be as unstoppable as their living, breathing cousins.

On Wednesday, the National Labor Relations Board ruled that unions can position large synthetic props like rats, often used to communicate displeasure over employment practices, near a work site even when the targeted company is not directly involved in a labor dispute.

While picketing companies that deal with employers involved in labor disputes — known as a secondary boycott — is illegal under labor law, the board ruled that the use of oversized rats, which are typically portrayed as ominous creatures with red eyes and fangs, is not a picket but a permissible effort to persuade bystanders.

Union officials had stationed the rat in question, a 12-foot-tall specimen, close to the entrance of a trade show in Elkhart, Ind., in 2018, along with two banners. One banner accused a company showcasing products there, Lippert Components, of “harboring rat contractors” — that is, doing business with contractors that do not use union labor.

Lippert argued that the rat’s use was illegal coercion because the creature was menacing and was intended to discourage people from entering the trade show. But the board found that the rat was a protected form of expression.

“Courts have consistently deemed banners and inflatable rats to fall within the realm of protected speech, rather than that of intimidation and the like,” the ruling said.

The rise of the rodents, often known as “Scabby the Rat,” dates to the early 1990s, when an Illinois-based company began manufacturing them for local unions intent on drawing attention to what they considered suspect practices, such as using nonunion labor. The company later began making other inflatable totems, like fat cats and greedy pigs, for the same purpose.

The labor relations board had previously blessed rats in a 2011 ruling. But seven years later, its general counsel, Peter B. Robb, sought to reopen the debate.

Mr. Robb, a Trump appointee, issued an internal memo in 2018 arguing that erecting a rat near an employer that was not directly involved in a labor dispute amounted to “unlawful coercion” — an attempt to disrupt the business of a neutral party. His office subsequently intervened on behalf of the companies in a handful of cases in which firms sought to block unions from deploying large inflatable paraphernalia close to their facilities.

One of those cases was dismissed, while a successor to Mr. Robb sought to dismiss another. (A judge has yet to rule on the motion to dismiss that case.)

In the case brought by Lippert, an administrative law judge ruled against the company in 2019, arguing that the rat did not amount to a picket or illegal coercion.

The judge noted that the rat and banners, which were erected by members of a local branch of the International Union of Operating Engineers, were stationary and did not create confrontation with passers-by. There was no evidence that the two union representatives present marched in front of the trade show or blocked people from entering, the judge wrote. They appeared to merely sit beside the rat.

The company appealed to the labor board in Washington, which solicited public comment last fall on whether it should modify or overturn the precedent.

But the board’s chairman, Lauren McFerran, a Democratic appointee, concluded that precedent required dismissing the complaint. Two Republican appointees indicated that they considered the precedent flawed but that banning inflatable rats would violate the First Amendment.

A lone Republican appointee, William J. Emanuel, argued that the precedent should be overturned.