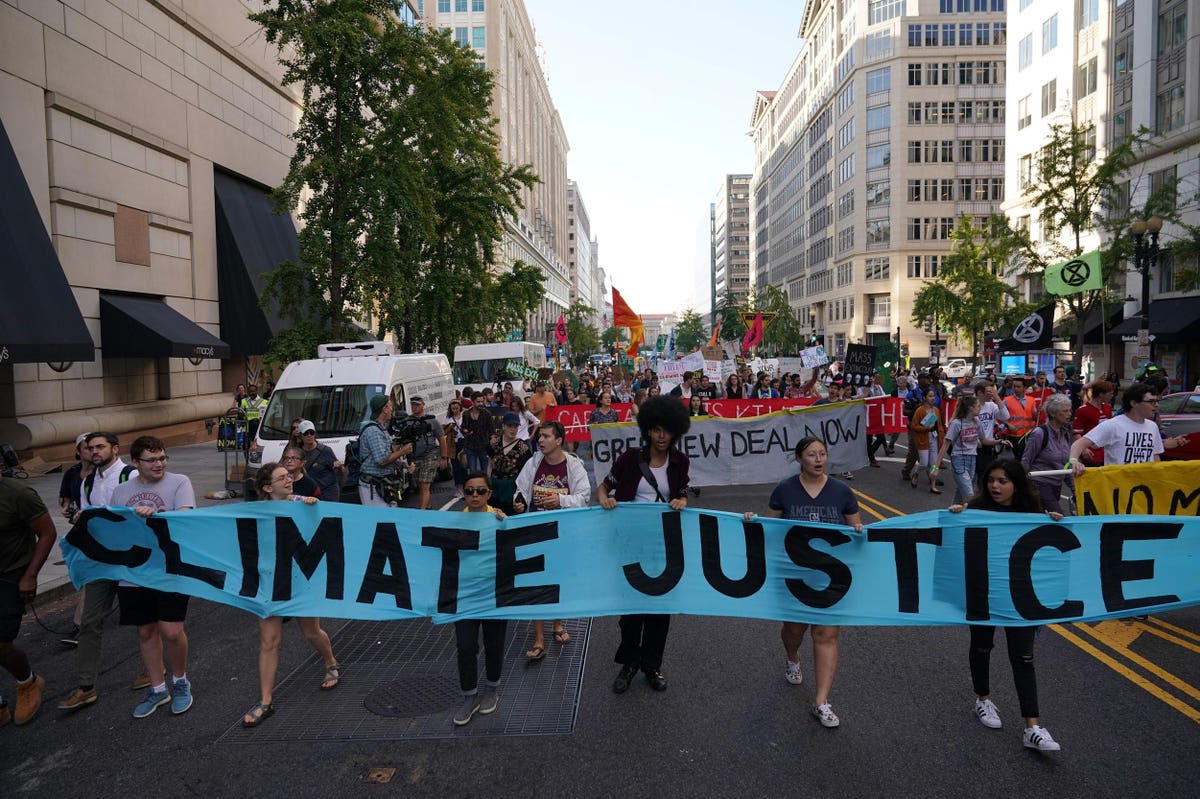 The Inflation Reduction Act is the most important climate action in United States history, estimated to cut U.S. emissions about 40% by 2030 compared to their 2005 peak. But even this generational legislation leaves America short of President Biden’s Paris Agreement commitment of 50% to 52% reductions by 2030.

Bridging this emissions gap requires a new cadre of “climate citizens” who push state and local governments to help make up the difference. Millions of Americans are already climate consumers driving electric vehicles, installing solar on their roofs, and eating less meat. Now it’s time for people to leverage their political power and ensure their local governments tap the $370 billion in incentives the new law provides.

Think of policy decisions made at state and local government as “secret levers” that determine our energy future. They are secret only in the sense that most citizens do not know about them, but they’re easy to find if you know where to look.

This is the core message of The Big Fix, a new guide to climate action: It’s time to learn where these levers are, and how to pull them.

Climate action can’t just happen in Washington, D.C. Local and state officials have power to clean up our grid, ensure buildings are efficient, and convert vehicle fleets from guzzling gas to sipping electricity.

These policymakers are closer to constituents, meaning citizens can easily use their voices to enact climate policy. Preventing dangerous climate change requires demanding all levels of government move faster on the energy transition. That’s where climate citizens can make a difference.

The funding in the new law makes ambitious climate action even more of a win-win. Billions in new clean energy incentives mean governments, utilities, and consumers can save money while saving the climate.

A clean power grid is the centerpiece of any climate strategy. Electricity can displace fossil fuels across the economy, from cars to buildings to manufacturing, but we cannot clean up other parts of the economy without cleaning up the grid. That can happen through advocacy at public utilities commissions—roughly 200 appointed and elected officials who control a quarter of U.S. emissions.

These state boards are the secret lever that decide if our electricity comes from clean energy or fossil fuels. They have authority to guide utility investments, and are legally bound to listen to citizens and make decisions in the public interest. Some utilities still misperceive clean energy as a threat to their business model, but federal funding now gives every U.S. utility a clear financial rationale for building clean power.

This approach works. A group of Colorado mothers, worried about the air their children breathe, helped convince their state’s largest utility to close coal-burning plants early despite the objection of a few conservative state legislators. Today, every coal plant across Colorado is either closed or scheduled to close, and renewable energy installations are booming.

Vehicles are the largest source of U.S. emissions, and arguably the easiest to clean up. The route is clear – transition to EVs as quickly as possible, build charging stations, electrify trucks and buses, and tighten fuel economy standards to make gas cars more efficient. This clears the air while protecting wallets from volatile fuel prices.

State and local governments can accelerate this transition by replacing their fleets of thousands of gas vehicles with electric cars and buses. They influence how many charging stations are built and where they’re located. They can push taxi or ride-sharing services to electrify. They can follow California’s trailblazing zero-emission vehicle standard, which 14 states and counting have already done.

Cities from Houston to New York City are switching to electric vehicle fleets, driving demand for new American-made cars while cutting emissions, usually because people spoke up at city council meetings. Dozens of students in Maryland and Arizona convinced their school boards to shift from pollution-belching school buses to clean electric ones by making the case for cleaner air and lower fuel costs. If it can happen in places as diverse as these, it can happen anywhere.

Buildings generate a large portion of our emissions by burning fossil fuels for space and water heating. Meeting our climate goals will be impossible without cleaning up America’s buildings, and a primary way to do that is by improving state and local building codes.

While hundreds of state and local governments have committed themselves to the Paris Agreement’s climate goals, most have not yet adopted modern building codes for new construction, and fewer still have started converting millions of existing buildings from inefficient fossil fuel burners to highly efficient electrified structures. Consumers themselves can help jump-start this switch while saving money every month thanks to new incentives Congress provided for wiring upgrades, electric appliances, and energy efficiency.

Dozens of cities have started the building cleanup by requiring all-electric new buildings, and many others are considering tougher requirements for existing buildings. Cities across the country have adopted new efficiency codes published by the International Code Council, and states like California and Massachusetts are pushing their cities to adopt advanced building codes. In all these examples, speaking up at a city council meeting can tip the scales toward electrification.

Nearly every product we buy and material we use comes from industrial processes that spew climate pollution. But industry has done very little serious work to find climate solutions. Smart policy can accelerate adoption of today’s technologies while spurring the research and development needed for the technologies of tomorrow.

State governments have an outsized role cleaning up industry. Adopting “Buy Clean” policies requiring a percentage of all materials for infrastructure projects be sourced using low-emission technologies can direct billions in public funds toward sustainable development and spur the clean industry market. As technologies emerge to clean up manufacturing, states can adopt energy efficiency and emissions targets for heavy industry.

In individual companies, employees can push for climate plans to cut emissions in their facilities and across their supply chains. Amazon employees did this in 2019, securing commitments to buy 100,000 electric delivery trucks and spurring the corporate giant to enlist more than 200 large companies to meet the Paris Agreement 10 years early. Technology companies have led the way adopting renewables to power their operations and clean up their supply chains, a move that only gets cheaper with the influx of federal funding.

America’s cities have evolved to depend on cars, increasing air pollution and lowering quality of life. Making our cities more walkable and bikeable while improving public transportation can cut emissions and create flourishing, equitable urban centers.

The examples are all around us. New York City imposed a congestion charge on taxis in lower Manhattan, closed off some streets to cars entirely, and has grown in popularity as a tourist destination. Similar ideas are being considered in Chicago, Los Angeles, San Francisco, and Seattle. Bike lanes and closed streets surged in popularity during the pandemic, and businesses along these avenues have benefited thanks to more pedestrians. Bus Rapid Transit systems like the one in Richmond, Virginia. are obviating the need for new rail projects at 10 percent of the cost of building a new subway. And rebates for electric bikes can flatten out even the hilliest city for cyclists.

Advocacy in city council chambers can pull this lever and directly transform where we live – the examples are all around us.

State governments, particularly where agriculture is a major part of the economy, can tap IRA funds to help farmers adopt climate-smart practices. City governments can clear the air through the simple act of planting trees, particularly in disadvantaged communities, which also lowers local temperatures.

Tackling climate change requires cutting emissions to zero, then removing them from the atmosphere. We have the tools to get started, but we need more innovation to hit zero. Researchers are studying technologies like hydrogen, advanced nuclear, geothermal, and carbon removal but need policies to turbocharge their market development.

Until the Biden presidency, the U.S. spent more on Halloween celebrations than research and development on technologies to fight climate change. Passing the Infrastructure Investment and Jobs Act, along with the CHIPS and Science Act, will plow billions into climate research and tax credits to develop new technologies. But this is still just a down payment on what’s needed for a stable climate future.

America’s goal of tackling climate change has three parts: cleaning up our electric grid, scaling new clean technologies so the entire world can afford them, and trailblazing smart design so other countries can follow our lead. Realizing these outcomes would be a grand national project.

Every citizen can spark change by voting, making a phone call, or attending a hearing. We must push national, state, and local officials in a focused way that encourages decisions that reduce emissions in those parts of the economy where they’re highest. That’s how we make The Big Fix.

Justin Gillis and Hal Harvey are the authors of “The Big Fix: Seven Practical Steps to Save Our Planet,” published by Simon & Schuster. Mr. Gillis is a former environmental reporter for The New York Times and Mr. Harvey is chief executive of Energy Innovation: Policy & Technology LLC®.

Ethereum: This Merge aftermath may put ETH in...