Retiring to New York City — and Getting a Roommate 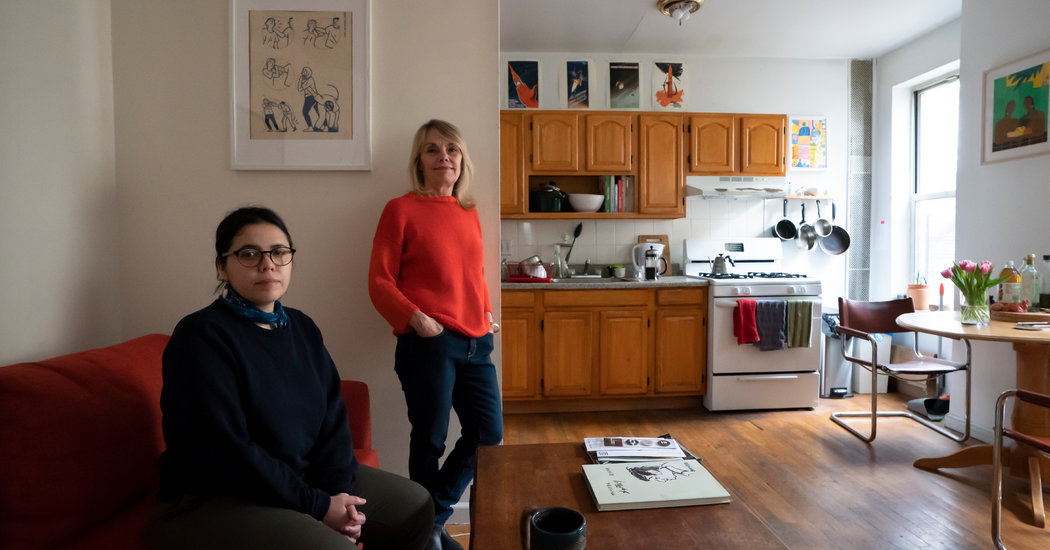 Connie Ottmann, a high school English teacher from Maine, had always wanted to live in New York City. And last summer, when she was 66, seemed the right time to do it.

Retired for several years, she had been rereading the works of the mythologist Joseph Campbell, who “really affirmed living life as an adventure.”

Once she made the decision, things fell into place. A friend who is a real estate agent offered to help rent her house in Hallowell, near Augusta, then quickly found a couple who signed a yearlong lease. Her sister in Irvington, N.Y., was going through some life changes and was happy to have her as a houseguest for several months, so Ms. Ottmann was able to conduct her apartment hunt from a place near the city.

“It seems invisible hands carried me here,” Ms. Ottmann said. “I couldn’t afford to rent an apartment alone so I thought, ‘I’ll rent a room.’”

She was confident that finding an apartment share would also go smoothly. Many friends and family members were not equally confident. “People weren’t too optimistic,” she said.

Her brother, who owns a house in Bedford-Stuyvesant, Brooklyn, didn’t think she would be able to find a place. A college friend who lived in the city was equally discouraging about securing a room share: “She said, ‘Eh, that’s mostly young people.’”

But her son and his girlfriend, who rent an apartment in her brother’s house, were encouraging. So, undeterred, Ms. Ottmann started looking for Brooklyn room shares on Listings Project, a weekly email with real estate listings, and Roomi, an app.

She did experience a twinge of concern after noticing that most Listings Project users seemed to be between 28 and 40; Roomi also skewed younger.

Several responses she wrote to ads went unanswered, including one she sent to a pair of comedians. “I’d thought it might provide them with new material for their acts,” she said.

“I got a little discouraged at first, but then I started hearing back from people,” Ms. Ottmann said.

A nice young man who got in touch had just rented an unfurnished apartment and was looking for someone to split the broker’s fee, which wasn’t ideal for Ms. Ottmann, who was planning to stay for only a year.

She met a pleasant couple looking to rent the second bedroom in their apartment, but the place was small and she thought living with a couple might not be the best option. A third apartment was run-down and smelled like cat urine.

And then she found a seemingly perfect situation: two rooms — a bedroom plus a separate room for a studio — in a Bedford-Stuyvesant three-bedroom shared with one roommate. It was a furnished sublet of at least six months and the rent, including utilities, was $1,200 a month.

Ms. Ottmann, who paints and writes a blog, had hoped for a space to work in other than her bedroom, but had dismissed the idea as unrealistic. And yet, here it was.

Occupation: Ms. Ottmann is a retired high school English teacher; Ms. Calvo is an archivist at the Gilder Lehrman Institute of American History.
Dividing a three-bedroom: Ms. Ottmann gets two bedrooms, but Ms. Calvo’s room is about the size of the other two rooms combined, so they pay the same amount of rent.
Dealing with the coronavirus: “I knew there would be risks, uncertainties and trials along the way,” Ms. Ottmann said, but this was not one she planned for.

When she saw it in person, Ms. Ottmann immediately liked the space. “I found the apartment quite spacious, and I liked how they set it up,” she said. The departing tenant, a woman in her 30s, interviewed her and offered Ms. Ottmann the two rooms before she met the roommate, Christine Calvo, 32.

Ms. Calvo, an archivist at the Gilder Lehrman Institute of American History, grew up in a household of four women in Los Angeles, so she wasn’t concerned about getting along with Ms. Ottmann. “After living in New York for 12 years, I’ve had so many different types of roommates,” she said. “I’ve lived with friends and friends of friends. Sometimes it worked out, sometimes it didn’t. You never know what it’s going to be like. She fit all the criteria.”

“I would have wanted to meet me!” said Ms. Ottmann, who moved in this December.

“Connie is definitely one of the more laid-back roommates I’ve had — and respectful,” Ms. Calvo said. “I’ve had some wild ones: I lived in one apartment without a door; one roommate started a fire, another misplaced the rent. It’s been easy with Connie.”

“We’re both introverts,” Ms. Ottmann said of their rapport.

Until recently, when she, like most New Yorkers, started spending all of her time at home, Ms. Ottmann could be found traveling on the subway, going to museums and lectures. She saw the Agnes Denes show at the Shed and David Byrne’s “American Utopia” musical.

“I want to meet people and take advantage of being here as much as I can,” she said. “And I want to know my way around really well. Maine is a beautiful place, but winters are hard and spring is even worse. And you have to drive everywhere. There’s a theater I love, but it’s a half-hour away.”

She has also been able to spend more time with her son and his girlfriend, as well as her brother, whose wife died several years ago, and his 15-year-old twins. She was lucky, she reflected, that moving to New York has been an adventure and a chance “to spend quality time like this with two of my siblings in our later years.”

A few things have surprised her: how open-minded potential roommates were about her age, how helpful and nice New Yorkers are in general and how quiet the apartment is.

On one of her first nights alone there, she noticed a neighbor making some noise. She couldn’t have been more delighted.