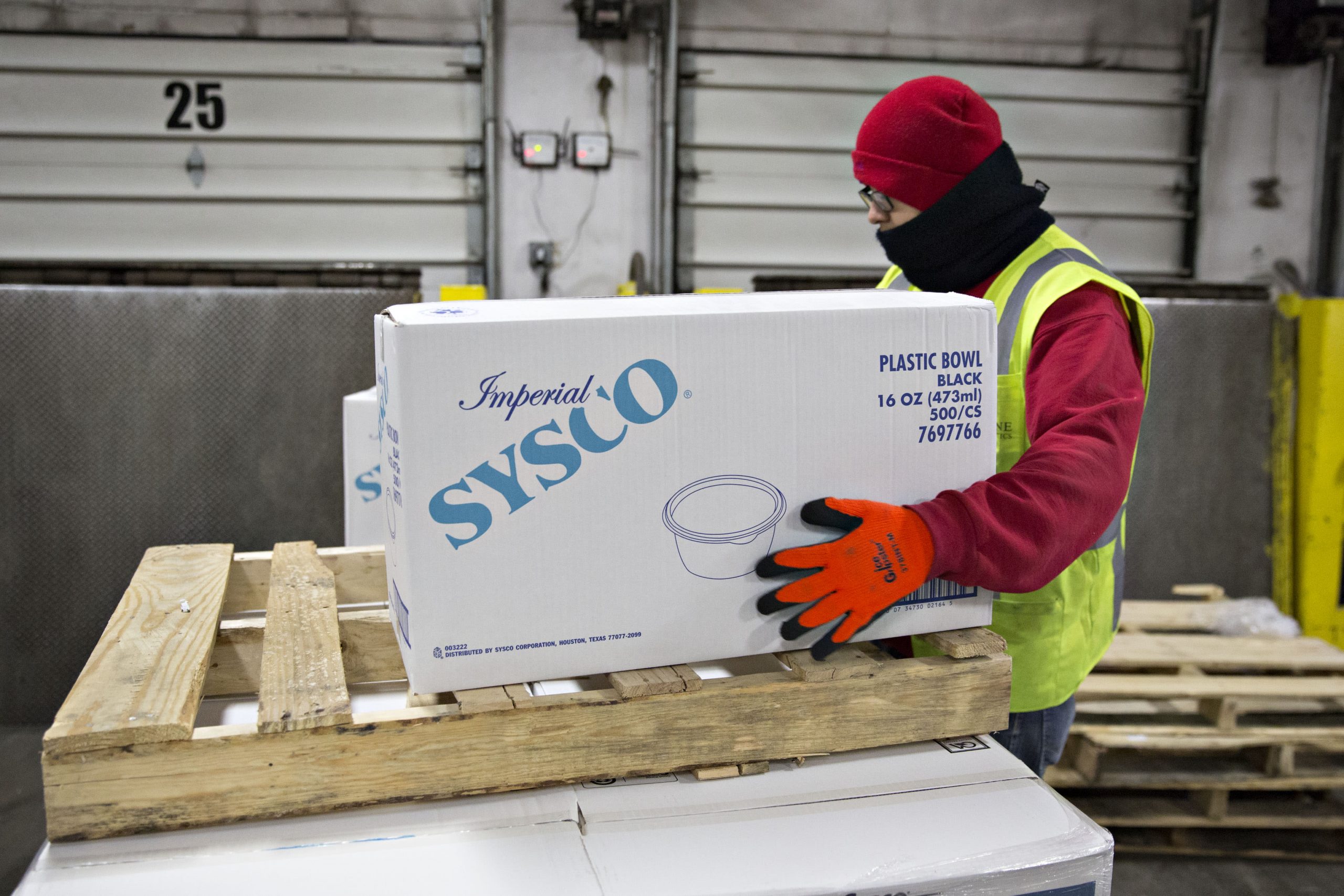 A worker moves a box of Sysco Corp. plastic bowls at the company’s distribution facility in Des Plaines, Illinois

Regalis Foods imports truffles, mushrooms, exotic seafoods and other pricey foods for high-end New York restaurants. Two weeks ago, sales were up 60% from a year ago.

Then, 99% of its customers closed their doors.

Now, the restaurant supplier is trying to offload its large inventory of Black Kaluga caviar before it expires by early summer. It’s giving away an ounce of the delicacy to customers who spend more than $250 on products sold through the company’s Instagram account.

Regalis is just one restaurant supplier that has found itself getting creative to keep business afloat amid the coronavirus pandemic. Sysco and US Foods, the country’s two largest restaurant and foodservice distributors, are pivoting to supplying grocery stores.

The outbreak has led restaurants to shutter their dining rooms temporarily, with some transitioning to takeout or delivery. Grocery stores, on the other hand, have seen their shelves empty as Americans stock up and prepare to spend more time at home. U.S. consumers have shifted 10% of share of stomach from restaurants to groceries, according to Black Box Intelligence.

Sysco is turning its focus to the grocery supply chain, which is not a segment that the company usually serves. Typically, restaurants account for 62% of Sysco’s sales.

CEO Kevin Hourican said on CNBC’s “Squawk Box” a week ago that he has personally made phone calls to the chief executives of the country’s largest grocers. Sysco declined to comment on recent developments for this story.

US Foods has struck new deals to support and sell to grocery stores.

“In some cases, product is easily transferrable from foodservice to retail,” spokeswoman Sara Matheu said. “In cases where it’s more challenging, we’ve been working directly with the retailer to make proper adjustments.”

The company has also partnered with C&S Wholesale Grocers to transfer US Foods’ workers to similar jobs with the grocery distributor.

But new grocery sales won’t completely offset the lost sales from restaurants and foodservice operators, like arenas, schools and universities. Sysco pulled its long-term outlook for 2018 to 2020 and drawn down $1.5 billion from its revolver. US Foods withdrew its fiscal 2020 forecast on Monday and announced it has drawn down $1 billion from its existing revolver.

For niche restaurant suppliers, weathering the shock to their business is also difficult.

“It’s been an absolute s—show to be honest,” Regalis founder Ian Purkayastha said.

“We have asked all of the people involved in the restaurant sales to help the ones that are either in retail or e-commerce,” founder, owner and CEO Ariane Daguin said. “Hopefully that’s going to help diminish the blow to all of the farmers and ranchers that are behind us.”

Thanks to the pivot, D’Artagnan has not had to lay off any of its 280 employees.

Regalis is selling products at restaurant wholesale prices — or even lower — to consumers via its Instagram. So far, it’s been averaging about 50 orders a day. The food supplier is also planning on launching e-commerce through its website, a project that has been in the works for the last six months. Unsold perishable foods are being donated to the nonprofit City Harvest.

Flight cancellations abroad also means that many international producers cannot send their products to Regalis. Luckily, truffle season isn’t until the fall. Purkayastha estimates that the company will be able to source about 70% of its portfolio through its relationships with small family farms.

“We have an obligation not only to our staff to stay open, but also to the small mom-and-pop producers around the country. Their livelihood is also at risk during this entire nightmare,” he said.