( / ) ( / ) ( / ) ( / ) ( / ) ( / ) ( / ) ( / ) ( / ) ( / )
Trending Now
Trump campaign settles lawsuit, voids NDAs
FTX-tied townhouse in Washington DC unlisted: Report
Bitcoin [BTC]: The rest of the month may...
Russian, Ukrainian officials say dozens of soldiers were...
PancakeSwap’s momentum slowed- Will CAKE form a plateau...
What It Is and How to Calculate and...
Inside Relativity Space’s monster factory 3D-printing reusable rockets
How Can My Brother Buy My Share of...
27-year-old pays $1,850 to live in a former...
How to protect against crime in the metaverse
Home Markets Pete Davidson, Eli Manning bromance begins with new Instagram page, sharing Giants memories
MarketsNewsUS 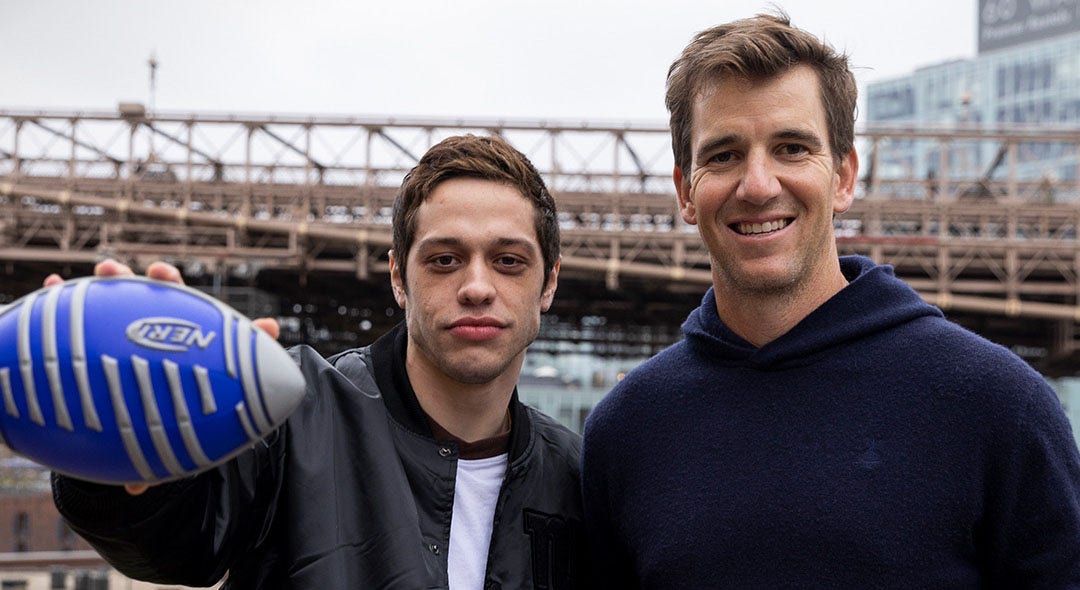 It’s a dynamic duo we didn’t think we needed in our life until watching the big brother-little brother combo of New York Giants legend Eli Manning and comedian Pete Davidson in action.

On the latest episode of “The Eli Manning Show,” the two-time Super Bowl champion got a tour of Davidson’s apartment while chopping it up about each of their accomplishments and playing the “Madden 23” video game.

But the best part of the hangout was Manning and Davidson creating an Instagram account together – neither of them use the social media platform personally.

Davidson grew up on Staten Island as a Giants fan, and he even proved it to Manning by showing him one of his many tattoos, with this one being a helmet that literally says, “I am a Giants fan.”

Davidson asked Manning if he had a favorite receiver to throw to during his 16-year tenure with Big Blue, knowing that he might not be able to answer it. However, Manning did bring up Plaxico Burress right away.

“I do know him a little bit. We hung out a couple times. He’s a really cool guy,” Davidson said before Manning FaceTimed Burress to chat.

The best moment perhaps for Davidson came when he had a brief catch with Manning, who wasn’t holding back at all with his throws of a much lighter foam football compared to the official NFL pigskin.

Despite getting a couple bumps and bruises, Davidson relished in the moment.

“I wish everyone in Staten Island could see this right now,” he said. “F—ing j—offs. Look what I’m doing.”

Manning had his turn to be the interviewee, asking Davidson who his role models in the comedy game were as he entered the industry.

Davidson would go on to explain why he hasn’t done any stand-up specials recently.

“I haven’t in a little while because streets are a little hot right now for Petey,” he said. “It’s just a little hot out there right now, like if I go try a joke, I have to explain myself and be around my family and be like, ‘It’s a joke.’ It’s just not the time for me right now. But I can’t wait to do it again.”

We’ll see how many more dad jokes and playful banter comes from these two.

Scott Thompson is a sports writer for Fox News Digital.