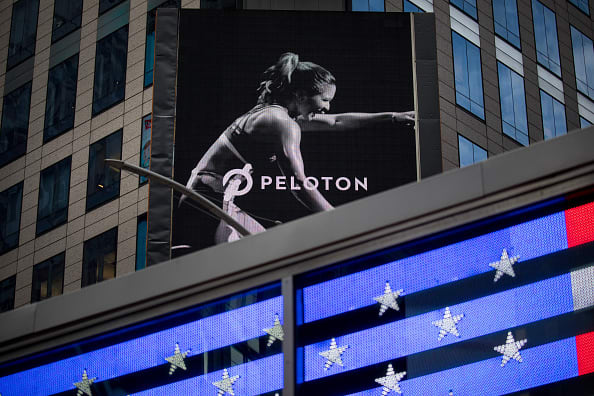 A monitor displays Peloton Interactive Inc. signage during the company’s initial public offering (IPO) across from the Nasdaq MarketSite in New York, U.S., on Thursday, Sept. 26, 2019.

As consumers increasingly turn to at-home workouts to maintain their fitness during the COVID-19 pandemic, analysts believe Peloton Interactive is well-positioned to come out a winner.

“It’s going to emerge from this a much stronger company with greater demand,” Wedbush’s James Hardiman told CNBC on Tuesday.

Peloton, which made its public debut last year, sells digitally connected cycles and treadmills for home use, as well as subscriptions to stream workout classes. Access to Peloton’s app costs $12.99 per month plus tax, though the company extended its normally one-month free trial to 90 days. The app also offers workouts for people without equipment, targeting people without Peloton equipment.

The app has seen a surge in downloads as gyms across the nation close due to stay-at-home mandates, according to a research note from Evercore ISI’s Lee Horowitz. Peloton saw total app downloads increase five times more in March than February, while its iOS user numbers doubled, according to the note based on third-party data from SensorTower.

“With the most up-to-date data through March, we are seeing Peloton subscriber growth and engagement clearly benefiting from global quarantines,” Horowitz wrote. Peloton’s conversion rate from the app to its at-home equipment is about 10%, he added.

Shares of Peloton are up 5% for March and down 1.4% year to date. The company declined to comment on customer growth. According to its second quarter earnings release, Peloton reported more than two million members as of the end of its second fiscal quarter on Dec. 31, and its quarterly revenue grew 77% to $466.3 million.

“If you go as far to buy the bike, you’re not somebody who’s planning on going back to traditional fitness patterns, once you’re bought in you’re bought in. That is not a temporary uptick in demand. That will have a lasting impact,” Hardiman said.

Peloton’s biggest obstacle is getting people to pay the one-time price of its products, about $2,400 for the bike and $4,400 for the treadmill (which currently isn’t being offered because it’s too big for customers to assemble on their own during the coronavirus shutdown).

However, Hardiman said that financing can make Peloton’s products more attractive than the gym, since users can purchase the equipment for about $100 a month.

“If you compare that to what people are willing to pay for full service gym memberships, and certainly these boutique fitness experiences, that is in a lot of instances a bargain. And your whole family is able to do it for that price,” Hardiman said.

“It’s still not cheap … partly given in what is increasingly likely to be a recession, but it’s not an insurmountable number for a significant amount of Americans,” he added.

Peloton itself has seen some negative impacts from the deadly virus. The company closed its retail locations due to the COVID-19 pandemic and stopped in-studio workout classes.

It also currently only offers its bike, since its treadmill is too large for consumers to reasonably assemble on their own. (Peloton normally assembles its products for users in their homes.) Though Hardiman said the treadmill makes up a small segment of Peloton’s business, so he doesn’t expect it to impact the business.

“The majority of people will go back to doing exercise the way that they did previously, but there’s going to be some subgroup of people where this will transform the way they workout. We were already at the very early stages of a long secular trend away from traditional gyms and toward at home fitness,” Hardiman said.