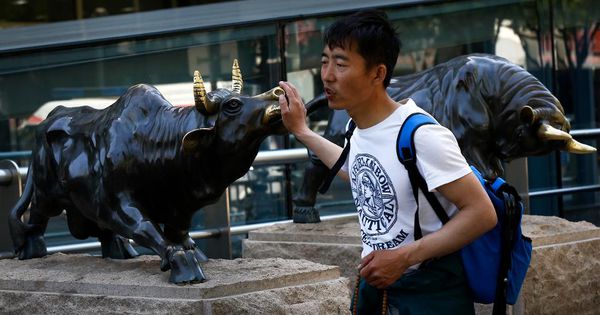 A man touches a bull statue on display outside a bank in Beijing, Monday, May 6, 2019. Shares and oil prices have tumbled after President Donald Trump jolted markets with a threat to raise more tariffs on imports from China, spooking investors who had been expecting good news this week on trade. (AP Photo/Andy Wong)

One could logically argue that crude oil prices should be heading toward $100 a barrel given the bullish factors in global oil markets. Instead, the Brent international benchmark has fallen below $70.

There is plenty of evidence in the market to support higher prices. Consider the following, attacks on Mideast oil infrastructure, intensifying tensions with Iran, continued falling production in Venezuela, slowing Russian exports caused by contamination, and OPEC’s suggestion that it plans to maintain supply cuts into the second half of this year.

And yet, the sentiment in the market has turned bearish with traders brushing off a spat of bad news that would typically cause oil prices to rise.

Amid all of this, oil balances are also tightening. Inventories have dropped below the five-year average in the Organization of Economic Cooperation and Development (OECD) countries. Stocks of refined products are tightening as well. To make matters worse, all of this is happening ahead of low-sulfur marine fuel rules that are set to take effect in roughly six months.

Prompt Brent prices in futures trading are demanding a premium over contracts for later deliveries at a level not seen since early 2014 when the benchmark traded at $110 due to tightness in physical oil markets.

But none of it seems to matter. Oil prices have finally started to feel the effects of the extended US-China trade war on global growth, leading to the biggest one-day loss of the year on May 23. Perhaps the writing has been on the wall for some time as US-China fears have pummeled other corners on financial markets, including stocks, bonds, and foreign exchange. The outlier is gold, which is up due to its safe-haven status for investors.

Oil supply gets all the headlines, but typically it is demand that sustains oil price rallies. Right now, the demand market has resurrected similar macroeconomic fears to those that caused crude prices to crash late last year. Yes, talk of a recession has resumed, and trade issues (primarily the escalation of the US-China trade war) is the source.

That means any bullish supply-driven headlines, even those suggesting imminent war in the oil-rich Middle East, are likely to yield short-lived rallies at best.

Brent could be mired below $70 and U.S. West Texas Intermediate below $60 for some time, as trading charts reveal no technical support for the former until around $66 and the latter around $55.

Further down the 12-month futures curve, Brent is trading even lower, at around $60, meaning speculators aren’t merely betting on higher prices.

Risk capital is leaving the market at an alarming rate. Convincing speculators – essential to supporting higher prices – to return will require a U-turn in sentiment which won’t be easy. The US-China trade war looks ugly and, at the moment, endless. Tariffs are rising, rhetoric is heating up, and both sides are digging in. For all the efforts to resolve it by Washington and Beijing, the current episode may be remembered as just the opening battle in a much longer war.

The Trump administration should realize what’s at stake. It will be difficult for the administration to maneuver, though, since it has made China’s unfair trade policies the central tenet of the president’s foreign policy. The issue also plays well with Trump’s base ahead of his re-election bid in 2020.

But financial markets across the board are officially consumed by the event. At the forefront of their minds is the prospect for a substantial slowdown in the global economy, which could hurt oil demand. The International Monetary Fund warned recently that the global economy was slowing down more than expected and cut its forecast for real GDP growth this year to 3.3%—the slowest pace since 2016.

Oil’s recent plunge vindicates the belief of OPEC that optimism, not fundamentals, powered recent price rises and that prices were “fragile.” Saudi Oil Minister Khalid al-Falih recently said that he’s not concerned about demand “so far.” But he also conceded that the second half of the year could bring much uncertainty “because of the trade friction.” The Saudis want to drive down inventories further to avoid a repeat of the price collapse in late 2018.

OPEC and its non-OPEC partners are expected to extend their supply cut deal of 1.2 million barrels a day through the second half of 2019, with the safeguard that Saudi Arabia will satisfy any shortfalls due to the myriad of existing and potential supply disruptions in the market.

A resolution or de-escalation of the US-China trade war would provide a far stronger signal to markets. But with that looking unlikely, oil traders will look to Saudi-led OPEC to manage the situation as best as possible.