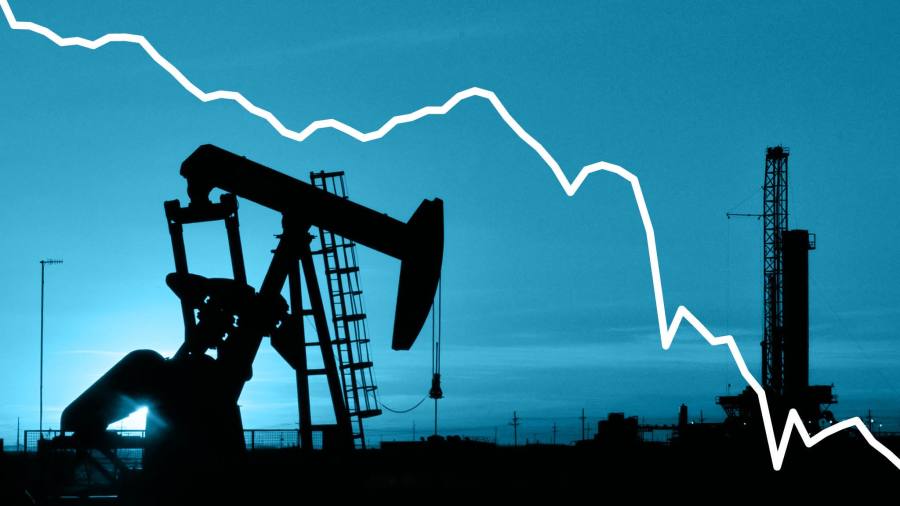 The world’s oil market once fixated on how Saudi-led Opec would tweak supply in small increments to boost prices. That concern suddenly feels quaint: the size of the global drop in consumption triggered by the coronavirus pandemic may be equivalent to the cartel’s entire output.

Saudi Arabia has pledged to ramp up exports as part of its price war, but the collapse in demand will compel other producers both within and outside Opec’s 13 members, to leave lossmaking supplies in the ground.

Demand is now down by as much as a quarter, or roughly 25m barrels a day. That is close to what Opec countries produce every day, or as if the US, Mexico and Canada had abruptly stopped consuming oil altogether. Storage facilities will soon be overwhelmed, say analysts, unless the industry can find a way to cut output at a scale never managed before.

On Sunday evening the price of West Texas Intermediate, the US benchmark, slid below $20 a barrel to an 18-year low, about 70 per cent less than at the start of the year. Several forecasters see single-digit prices on the horizon as pipes and tanks fill up.

“When you predict a surplus of more than 20m barrels a day we will hit infrastructure problems quickly,” said Mathios Rigas, head of Energean, a European energy producer. “With oil prices below $20, we’re going to see a lot of shutdowns.”

While some producers will go bust, stronger ones will decide whether to take more drastic and potentially costly action: shutting wells that now run at a loss, risking damage to the reservoir.

Others will stop short of that, but may scale back output. That could help conventional oil wells in the long run, allowing pressure to recover.

Energy Aspects, a consultancy, forecasts global oil output will fall 200,000 b/d this year — the first annualised drop since 2009 — and 1.8m b/d in 2021. That is despite expectations Saudi Arabia, Russia and others fighting a war for market share will add about 4m b/d to the market in new supplies, giving some indication of how far other producing nations will need to cut back.

Goldman Sachs said as much as 900,000 b/d would be shut down, “with the true number likely higher and growing by the hour”. All told, the slump could reduce production capacity by 5m b/d, the bank said.

The supply losses will be spread unevenly. Production close to ports would be most insulated from the price shock, said analysts. Norway’s Equinor even says its flagship offshore Sverdrup project in the North Sea will exceed planned output later this year.

Andrew Lewis, head of exploration and production at Vitol, said many companies would want to avoid shutting production entirely, but even small cuts could be political decisions involving host countries that rely on energy royalties.

“Governments are going to be involved in these decisions,” Mr Lewis said. “When the production needs to come back it will not, however, be switched back on overnight.”

US shale production depends on constant drilling of thousands of wells a year and reacts quickly to price changes. Producers have already slashed spending this year by 30 to 50 per cent, and the oil rig count dropped by 40 to 624 last week, according to Baker Hughes, a GE company.

“No one really makes money at a price below $35 a barrel,” said Francisco Blanch at Bank of America, of the continent’s shale producers.

Barrels of crude in Midland, Texas were changing hands for as little as $7 a barrel on Monday, well below the benchmark. Pipeline operators asked producers to reduce shipments to avoid inundating pipelines and storage tanks.

Rystad Energy, a consultancy, said that at current prices, thousands of planned wells would be cancelled. US production could fall by almost 4m b/d by the end of 2021, Rystad said, compared with a record high above 13m b/d last month.

In Alberta’s oil sands, the local benchmark had been selling for about $5 a barrel and producers had cut $4bn from capital budgets, said Morgan Kwan, an analyst at consultancy RS Energy Group in Calgary.

Suncor Energy, a large Canadian producer, announced last week that it would delay the restart of one project and reduce output from another, cutting about 30,000 b/d from its projected oil sands production this year.

Ms Kwan said other producers would need to decide which would be less costly: producing barrels at a loss or shutting the projects.

Some analysts are warning that closing down production could make prices more volatile in the future if not all of the output is able to return.

“Damage today implies less production tomorrow,” said Bjarne Schieldrop at Nordic bank SEB, “once we have put Covid-19 behind us.”