Asia-Pacific markets may look to end the week on a high note following a rebound on Wall Street Thursday that saw investors favor blue-chip stocks, although tech stocks also rose. The Dow Jones Industrial Average closed 1.29% higher, clawing back a large portion of losses seen on Wednesday. Still, the US index remains off its recent all-time high.

Sentiment during the New York trading session was bolstered by a drop in yields across the curve. The benchmark 10-year rate dropped near 2.5% following a CPI-induced Treasury selloff earlier this week. Despite the drop, Treasury rates remain mostly higher across all tenures. The drop in government bond yields is likely nothing more than a small correction from yesterday, when rate traders may have grown too optimistic over a premature Fed taper.

In fact, the target rate probability for a Federal Reserve 0.25% rate hike dropped to 8.8% from 10.0% the day prior, according to the CME FedWatch Tool. The longer the Fed stays dovish, the longer equity prices are likely to find support. Moreover, even a hotter-than-expected print on the US April producer price index and encouraging jobless claims data failed to persuade rate bets.

New Zealand reported Business NZ PMI for April this morning, showing a print of 58.4, down from last month’s read of 63.6. Still, the read above 50 reflects a strengthening economy as Covid’s impact has been largely contained domestically in the island nation. Hong Kong is set to release its final read on Q1 GDP later today, according to the DailyFX Economic Calendar.

The New Zealand Dollar is recovering from sharp losses against the US Dollar. NZD/USD dropped over 1.5% earlier this week, and a trendline from the April swing low appears to be providing support to the currency pair, along with the 50-day Simple Moving Average. MACD is turning lower, however, and could signal weakening momentum. The 38.2% Fibonacci retracement level to the upside will be key to breach before moving higher. 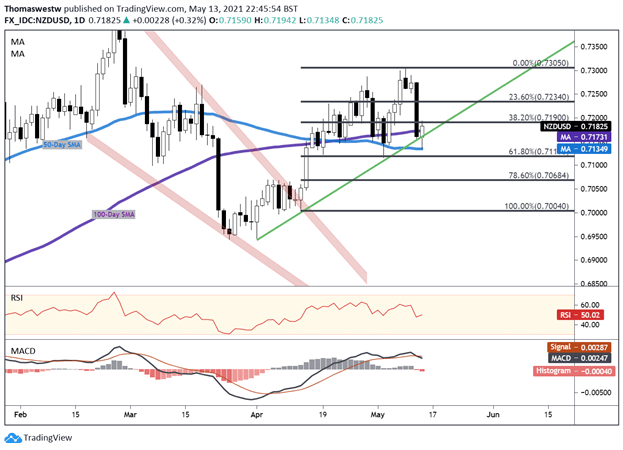 Retirement Plan Solutions for Workers 70 and Over