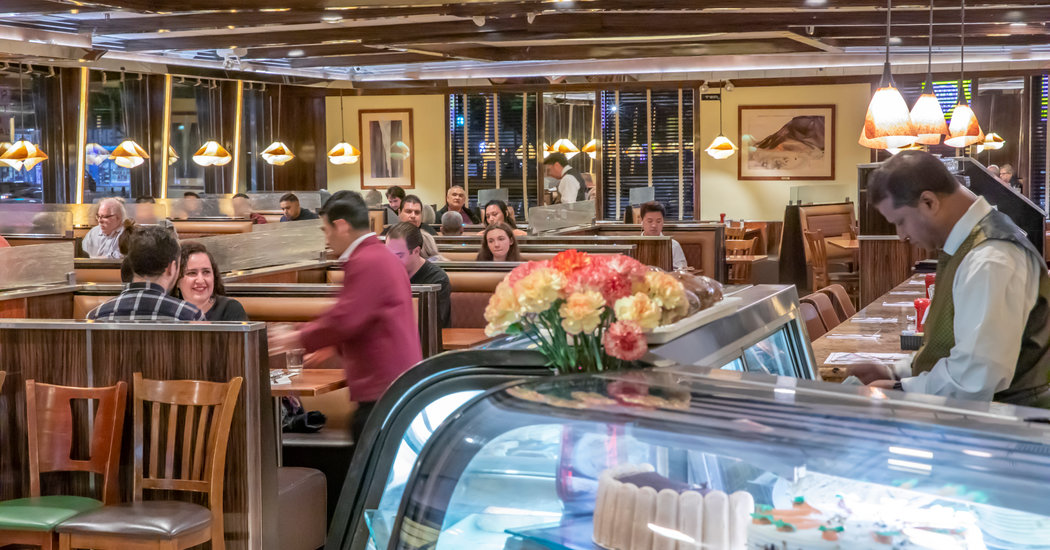 Louis Gritsipis insists he will never sell his diner in Hell’s Kitchen, although developers have had their eyes on it for years.

And why should he? “This is my palace,” he said after a recent lunch service at 42nd Street Pizza, the old-school Greek diner on the ground floor of his four-story, white stucco building. People come for pizza by the slice, or choose from the 220-item breakfast-lunch-and-dinner menu.

But Mr. Gritsipis’s kingdom is under siege — from rising expenses, changing tastes and developers who are trying to buy smaller and more unusual lots to assemble enough land for residential and mixed-use projects. His building, near the ultraluxury Hudson Yards development, is surrounded by glassy high-rises occupied by transient renters and owners, few of whom order gyro platters.

Such are the forces encroaching on the city’s vanishing diners. While their disappearance has been lamented for years, diners along the margins of Manhattan and in parts of other boroughs previously thought impervious to redevelopment are closing because of increasing rents and enticing offers that are hard to pass up. While Mr. Gritsipis’s diner is in a four-story building, many are the lone tenants in single-story buildings. The land and unused development rights above them are lucrative, as a developer can use those rights to gain more height or bulk for new towers, many of them luxury apartments.

Still, the diner’s imprint on New York culture can be felt among the holdouts, the mourners of the recently shuttered and the restaurant owners who find life after the death of their diners.

Since 2014, 15 diners, many in stand-alone buildings, have been sold in New York, according to an analysis by Ariel Property Advisors, a commercial real estate brokerage. Queens had the most sales, with seven, followed by six in Brooklyn, two in the Bronx and one in Staten Island. There were no sales in Manhattan.

But that does not account for the diners whose owners lost their leases. Riley Arthur, a photographer who has visited nearly every diner in the five boroughs, estimated that there are 419 left in New York City. In the three years since Ms. Arthur began photographing them for her Instagram page, 39 have closed — an average of 13 a year.

In many cases, they didn’t close because of dwindling customers. “It’s just the other factors” — like rising rents and shrinking profit margins — that “are insurmountable,” she said. “You just can’t make up that difference selling eggs.”

The diner’s heyday was in the 1920s, followed by a surge after World War II that was driven by immigrants, many of them Greek, said Richard J.S. Gutman, the author of four books on diners. In recent years, a number of Latin American, South Asian and Middle Eastern owners have joined their ranks.

Mr. Gutman offers a narrow definition of the classic diner — as the factory-made “lunch cars,” often with stainless-steel finishes and neon signs, that New Yorkers used to see on street corners. By his count, there were once as many as 300. Now there are about 80.

Others are operating on borrowed time. The Neptune Diner in Astoria, Queens, which sits on a 100-by-90-foot lot, was sold in October for $10.35 million. While the diner, with its Mediterranean tile roof and neon sign, occupies a fraction of the lot, a developer could build more than 44,000 square feet on the property, thanks to unused development rights — enough for a six-story apartment building with commercial space on the ground, said Michael A. Tortorici, an executive vice president at Ariel Property Advisors.

Nick Tsoromokos, a partner at the law firm Tsoromokos & Papadopoulos, who represented the buyers, said the diner’s lease will expire at the end of August, but might be extended on a monthly basis. A manager at the diner said they expect to stay in business for four more years, but Mr. Tsoromokos said that was unlikely.

To some, the diner’s decline was inevitable.

“The diner is a 747,” said Paul Fetscher, an agent with Coldwell Banker Commercial NRT, who specializes in restaurant sales. “It needs tremendous velocity to continue to make money,” he added, noting that many are open 24 hours a day.

He attributed part of the pressure to rising taxes and to the $15 minimum wage law in New York that cuts into owners’ margins. And as many owners are nearing retirement age, he expects the pace of sales to accelerate.

Some are trying to adapt. Bill Tsibidis, 42, an owner of the Crosstown Diner in the Throgs Neck section of the Bronx, is often at odds with his father, Peter, who bought the prefab diner on Bruckner Boulevard in 1982. “We were fighting tooth and nail — and he is still stuck in his ways,” Mr. Tsibidis said.

His father, who is from Sparta, Greece, was opposed to taking delivery orders, because he thought it would tarnish the restaurant’s reputation. Now deliveries make up about 40 percent of their business.

Recently, Mr. Tsibidis has added other kinds of food to the diner’s Greek-American fare, including pernil, a Puerto Rican roast pork dish, and he is in talks to bring in a sushi chef. He also runs Facebook, Twitter and Instagram accounts to promote the diner.

“You either change or you’re dead,” Mr. Tsibidis said, noting that one of their competitors, the Pelham Bay Diner, sold in January after 37 years in business. Wharton Properties, a commercial developer, paid $10.25 million for the diner and its parking lot.

But even when diners succumb to the forces of redevelopment, their legacy sometimes lives on.

When the Frontier Diner, at 39th Street and Third Avenue, burned down in a five-alarm fire in 2010, it was the only business that Elias Kougemitros had ever known. It opened in 1976, the year he was born.

The one-story brick diner had a neon cactus sign and a Wild West theme, and its name was inspired by his father and uncle’s love of John Wayne westerns.

“We really didn’t know anything other than the restaurant business,” said Mr. Kougemitros, who returned to work there after 12 years in the New York Army National Guard and tours of duty in Iraq and Afghanistan. But the prospect of rebuilding the diner from nothing, at a time when banks were reluctant to lend, forced them to consider selling.

There was no shortage of offers. They received more than three dozen bids over the years, Mr. Kougemitros said. He and his siblings and cousins spent two years interviewing developers. They chose Charles Blaichman, of CB Developers, because instead of insisting on an outright sale, he agreed to a 99-year lease that allowed the family to keep the land and collect rent on a new rental tower to be built on the site. Its name: The Frontier.

That was the beginning of Mr. Kougemitros’s foray into development. By the time the lease was signed in 2012, he was studying real estate at New York University.

“After we made the deal, I told him, ‘When you get out of school, if you’re interested, come talk to us,’” said Mr. Blaichman, who hired Mr. Kougemitros later that year as a project manager. “He’s been a great asset to us ever since.”

Mr. Kougemitros’s time at the diner was formative training. When Mr. Blaichman and his development partners wanted to build another property on the same block, they discovered that Mr. Kougemitros already knew the owners.

“There wouldn’t have been a project to be had if there wasn’t an Elias and there wasn’t a Frontier,” said Megan Tarter, whose family owned two brownstones on the block. She and her father, Fred B. Tarter, had been regulars at the diner. Her favorite item on the menu: chicken salad, whiskey down (that is, with toasted rye bread).

She and Mr. Kougemitros had spoken for years about redeveloping their land, so when an opportunity to combine her property with the new Frontier rental arose, she agreed to demolish the brownstones for a majority stake in the project. The second tower, a partnership with CBSK Ironstate, shares a lobby and amenities with the Frontier. The combined buildings have 146 rental apartments, including 30 below-market-rate units.

Mr. Kougemitros has since worked on a number of development projects, including the Lindley, a new 74-unit, 21-story condo on the same block as the old diner, where prices started at $935,000.

The Frontier Diner lives on in other ways, as well.

“I can’t tell you how many people have told me, ‘I met my wife there,’” said Mr. Kougemitros, who did too: He met Avideh Safaei, who works in finance, while he was manning the counter.

“She asked for coffee — milk with one Splenda — the way she still takes it,” he said. They have been married for seven years.

For others, like Mr. Gritsipis, the diner owner surrounded by new development in Hell’s Kitchen, the battle continues.

Mr. Gritsipis bought the building for $150,000 in 1980, after renting it since 1965, and he lives in a two-bedroom apartment upstairs, with his wife, Raquel, who works with him in the restaurant, and their 16-year-old son, Andreas. He runs it seven days a week, except during his annual trip to his homeland of Kandila, in the Aetolia-Acarnania region of Greece.

“This is my house and place for 55 years — the hell with the money,” he said, adding that he regularly gets offers from developers, some from as far away as Kazakhstan.

Mr. Gritsipis earned the esteem of diner enthusiasts in 2013, when he told The New York Times his story of rejecting what he said was a $10 million offer to sell his building. He was in an office in Midtown, finalizing the contract, when he balked at the prospect of paying a $480,000 tax that he said the developer refused to pay.

These days, he is determined not to sell, partly on principle. When he first rented the restaurant, the block was desolate after 3 p.m. and crime was rampant; he was held up 27 times, he said. Now that the neighborhood is filled with luxury towers, basking in the glow of nearby Hudson Yards, he feels he is being pushed out.

He pays almost $70,000 in annual property taxes, while many of his new high-rise neighbors receive tax abatements. He has no desire to stop working, he said, and the cost of starting a new business would be too high, even if he were to sell the building.

He does have a contingency plan, in case his son decides he doesn’t want to run the diner: The narrow 21-by-100-foot lot might be able to support a boutique hotel of about 20 stories. But because the property is boxed in by other buildings, the floor plan options would be limited, and the construction could be costly.

Sitting in the back of the diner on a recent afternoon, a blue cap on his head and a matching apron around his waist, he praised his son, Andreas, who takes a crosstown bus and the subway every weekday to attend Saint Demetrios Greek-American School in Astoria, Queens.

Andreas wants to go to culinary school, Mr. Gritsipis said. (Actually, his son later clarified, he’s interested in business school.) Mrs. Gritsipis walked into the dining room with a message from Andreas: He thinks about the diner’s future all the time.