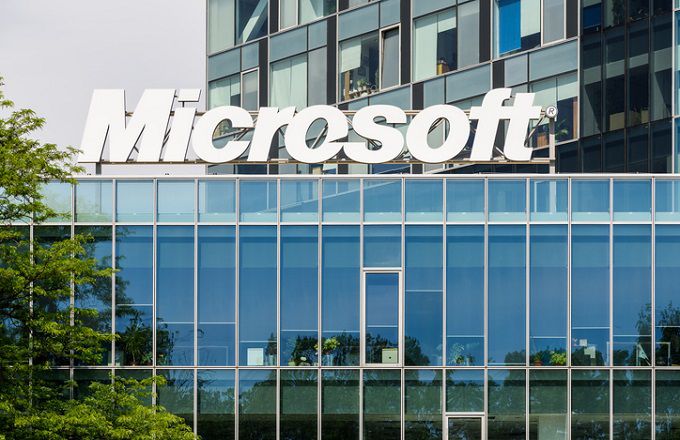 Dow component Microsoft Corporation (MSFT) could prosper after the pandemic ends, posting new highs while competitors struggle at lower levels. The company is reporting a massive surge in cloud-based service usage due to mandatory shutdown orders, with dramatic gains in team, gaming, and other digital applications. This flood also bodes well for the next generation of traditional products, including Microsoft 360 and the new Windows Core operating system.

Recent price action confirms this optimism, with the decline finding support at the 50-week exponential moving average (EMA) and four-year trendline. Accumulation has taken a minor hit during this period, dropping the on-balance volume (OBV) accumulation-distribution indicator to the lowest low since November 2019. Of course, this is far better than the majority of the stock universe right now, which got sold aggressively until a week ago.

Commercial information technology poses the biggest challenge for Mr. Softee, with the blue-chip customer base likely to reduce spending to survive the crisis. IT budgets have been cut to the bone in prior economic downturns as executives tried to squeeze a few more years out of aging software and hardware. This segment accounts for at least one-third of Microsoft’s revenues and operating income, and it could remain a sore spot for several years.

The stock posted seven stock splits in the 1990s, carving a historic advance driven by its membership in big tech’s “Four Horsemen” – companies recommended by analysts and financial advisors as lifetime “buy-and-hold” plays. The rally stalled near $60 in December 1999 in reaction to government anti-trust proceedings that alleged the company was engaged in monopolistic practices with its Windows OS sales and marketing.

The subsequent decline relinquished more than 60% after the internet bubble broke, settling near $20 at the end of 2000. A 2001 bounce into the low $30s posted the highest high for the next six years, yielding successful 2002 and 2006 tests at the 2000 low. A 2007 uptick mounted the prior high by about three points before rolling over in a failed breakout and downtrend that broke support at the eight-year low during the 2008 economic collapse.

A slow-motion recovery wave cleared the low $30s in 2014 and completed a round trip into the 1999 high in the summer of 2016 (black line). The stock broke out after the presidential election, booking the strongest gains of the century into February 2020’s all-time high at $190.70. The first wave of the coronavirus sell-off relinquished more than 30% and 50 points in six weeks, finding support in the $130s on March 23.

The uptrend that started in the summer of 2015 held within a rising channel until a late 2019 channel breakout, typical of a climax wave often carved at the end of multi-year rallies. Price action held multiple tests at channel support during this period, while last week’s reversal reinforced a trading floor that has now lifted into the $130s. This could mark a turning point for Microsoft, but a retest of the low is now more likely than a rapid recovery to the prior high.

The monthly stochastic oscillator crossed into the overbought zone in April 2019 and held that lofty level into a February 2020 rollover that established the first major sell cycle since the second half of 2018. However, this indicator hasn’t reached the oversold zone since 2015, while rising lows since that time may indicate that buyers will return quickly when we finally see the light at the end of the tunnel.

Microsoft should survive the pandemic in a commanding position that could signal new highs for its stock price in coming years.

Disclosure: The author held no securities in the aforementioned securities at the time of publication.