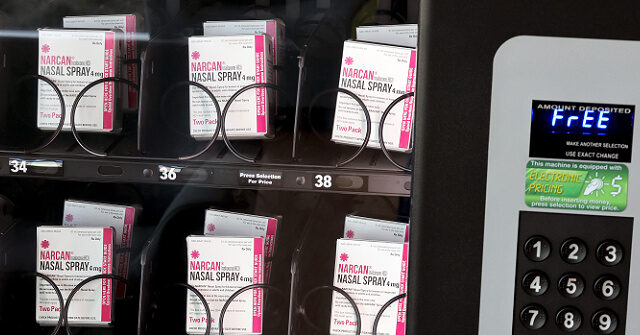 A Narcan vending machine, which dispenses life-saving naloxone to treat opioid overdoses, was emptied approximately one day after being installed in Vine Grove, Kentucky.

“I didn’t plan on it going that quick, but I’m glad that it did,” Mattingly said via WLWT.

Mattingly was inspired to install the Bluegrass State’s first Narcan vending machine after witnessing a young woman save a friend’s life who overdosed in a bathroom earlier this year.

The machine dispenses two naloxone packages for free after entering a code. It also provides a pamphlet that gives resources on treatment.

The police chief noted the department has ordered more packages and will restock the machine next week.

Kentucky has been hit hard by the opioid crisis as 2,250 residents reportedly died from a drug overdose in 2021, increasing from nearly 15 percent the year prior. In Hardin County, where Vine Grove is located, 46 individuals lost their lives from an overdose, according to WDRB.

According to the state’s office of the State Medical Examiner, fentanyl was the largest driver of overdose deaths last year, accounting for approximately 70 percent.

There were 672 overdose deaths last year among those aged 35 to 44, the highest of any age-cohort in the state, the Associated Press noted.

More than 107,000 Americans died from a drug overdose in 2021, with 66 percent of those deaths related to synthetic opioids.

As synthetic opioid deaths increase, the DEA is now warning the public of “an alarming trend” of rainbow-colored fentanyl pills, which they believe Mexican drug cartels are using in a “deliberate effort by drug traffickers to drive addiction amongst kids and young adults.”