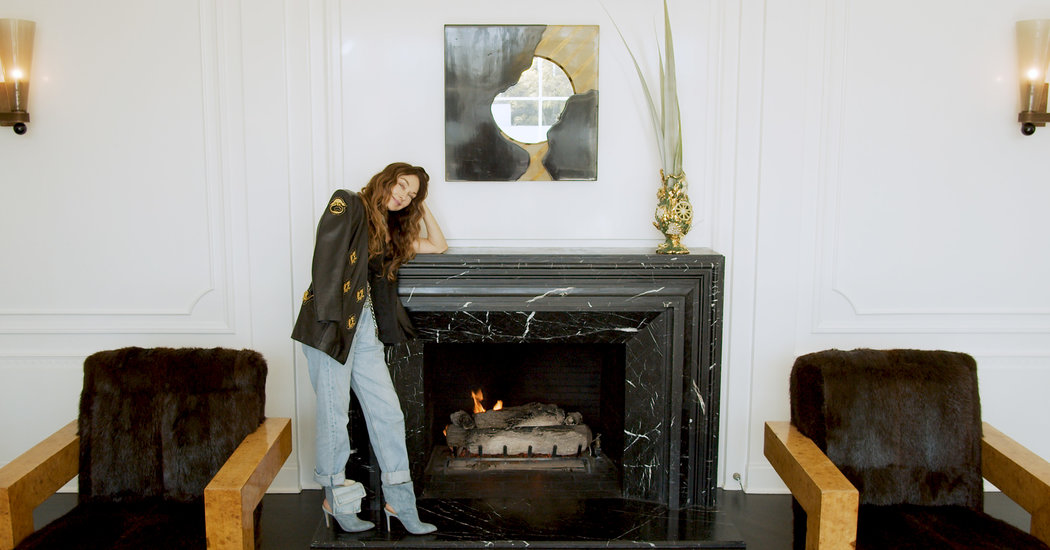 The home’s current aesthetic is informed, in part, by its own rich Hollywood history. The original owner of the house was Hobart Bosworth, a silent-film star, and later the 1940s screen idols William Powell and Carole Lombard lived here at the height of their careers. The property was then acquired by Albert “Cubby” Broccoli, the producer of the James Bond film franchise, who died in 1996, and Wearstler bought the home from his family’s estate. Perhaps no room nods to the building’s past more than the grand foyer, which is tiled in Art Deco-style marble and looks onto the large central courtyard, filled with sculptural cypress trees, around which the house is built. The sitting room, meanwhile, located just off the entrance hallway, faces the home’s 90-foot-long blue limestone-and-plaster swimming pool and 3,800 square-foot pool house (once a screening room), which together evoke the romance of a 1960s-era Slim Aarons photograph. Even the curving central staircase, complete with a curlicued banister, looks made for an entrance worthy of Norma Desmond.

While the scope of the home feels grand, a closer look reveals a quirkiness that mirrors Wearstler’s own affable demeanor. Oozing across a black marble table at the foot of the main staircase, for example, is a melted disco-ball sculpture by the Rotterdam- and New York-based design collective Rotganzen. And just off the entrance vestibule is a mirror with a lumpy frame created by the French artist and designer Louis Durot, a piece that Wearstler admires because of its resemblance to chewed-up bubble gum. Her own outré creations also animate the rooms: an angular, striped black-and-white marble Lineage chair sits in the foyer, and offsetting the dark wood herringbone floor of the dining room is her oval Fractured Racetrack table, made from antique brass and hand-shattered glass, topped with knobbly white and orange vases by the Italian designer Gaetano Pesce.

The house abounds with historical details Wearstler has kept in place, including her “pantry” — a second, smaller kitchen tucked inside a first-floor lounge at the back of the house with a striking green onyx floor — and what she refers to as the “party bedroom,” a stark white guest suite with a walk-in closet that contains an unusual original feature: a pull-down bar for serving cocktails. She’s wallpapered the small space with family pictures and christened it the “love closet.”

While the cupboard-cum-bar came with the house — during Hollywood’s golden age, Wearstler says, entertaining often took place in the bedrooms — she also uses her home as a testing ground for the antiques she has collected from auctions, dealers and flea markets around the world. In downtown Los Angeles, she keeps a 15,000-square-foot warehouse filled with an ever-rotating roster of treasures waiting to be placed in one of her professional projects — but they often end up in her own home along the way. “I buy things I love. I know the anomalies,” she says. “For me, it’s emotional.”