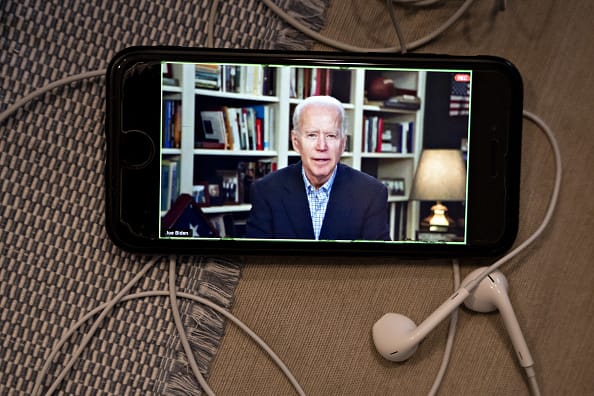 “Here’s the Deal.” Joe Biden now has a podcast.

As the coronavirus pandemic forces it to suspend in-person campaign events, Biden‘s presidential campaign launched an audio show on Monday called “Here’s the Deal.” The episode, the first in what the campaign describes as a series of discussions on pressing topics, features a coronavirus question-and-answer session between the former vice president and his ex-chief of staff and Obama administration Ebola czar Ron Klain.

In the episode, Klain criticized the Trump administration for its delays in ramping up testing — considered a core weapon against COVID-19. Biden ran through his plans to encourage development of more hospital sites and production of protective medical equipment and ventilators, along with his proposals to boost Social Security benefits, forgive a chunk of student loan debt and expand family and medical leave during the crisis.

“We’re going to beat this. I have overwhelming faith in the American people,” Biden said near the end of the 21-minute podcast.

The new offering underscores the lengths the Biden campaign has gone to stay relevant as coronavirus developments swallow up interest in the 2020 presidential campaign. Biden finds himself stuck in limbo, unable to extend his wide pledged delegate lead over Sen. Bernie Sanders as most states that have not voted push back their primaries until June. Sanders has said he is reevaluating his campaign but has remained in the race.

Biden and Sanders have resorted to video streams to get their message out while they pause in-person campaigning (though Sanders’ digital transition had fewer hiccups). They stand at a decided disadvantage to President Donald Trump, who has participated in a series of extended government press briefings, photo opportunities and media interviews to detail his administration’s response to the pandemic. His 2020 campaign has also canceled its rallies temporarily.

Trump called into the Fox News show “Fox & Friends” for 54 minutes on Monday. The president has chatted with his favorite news channel a few times recently, as Trump last week joined in a Fox town hall on the coronavirus and was interviewed on “Hannity.”

Since notching primary wins over Sanders in key states such as Michigan, Washington, Florida and Illinois, Biden has tried to project himself as a general election candidate. Asked at a virtual news conference last week if he would participate in a primary debate if the Democratic National Committee held one in April, Biden said, “I think we’ve had enough debates. I think we should get on with this.”

Sanders, whose campaign has said he would join in a potential debate, has also used his standing to get his priorities across in the Senate. On Wednesday, he threatened to hold up a $2 trillion coronavirus relief bill after four Republican senators pushed to dial back the expanded unemployment benefits included in it. The Senate passed the legislation unanimously that night, and Trump signed it Friday after House approval.

Biden leads Trump by about 6 percentage points in an average of recent general election polls, according to RealClearPolitics. The Democrat has also narrowly led the incumbent in the latest surveys of the pivotal states of Pennsylvania, Michigan and Wisconsin — though most of those were taken early this month.

Trump’s approval rating has ticked higher during the crisis, though it is unclear if the trend will hold as the economic damage from the pandemic continues to take its toll.