Oil prices came under more pressure after news broke that Iran responded to the EU’s final draft text to restore the 2015 nuclear deal. Earlier, Hossein Amir-Abdollahian, Iran’s Foreign Minister, said a deal is within reach, granted the US is “realistic.” While hurdles remain, the United States and Iran are one step closer to an agreement, which could see Iranian oil return to the global market within months. Iran may be capable of increasing global supply by upwards of 2 million barrels per day, although it would likely take time for production to ramp up to those levels.

Amid fragile sentiment that hinges on global recession fears, the prospect of a deal will likely keep oil prices subdued. Backwardation in WTI’s prompt spread—the difference between the current and next month’s contract price—has fallen to just 56 cents, the lowest since April. The decline suggests that oil prices may continue to fall. In the meantime, inventory reports from the American Petroleum Institute and the Energy Information Administration are due in the coming days. Brent prices are slightly higher through APAC trading but prices remain nearly 4% lower on the week. 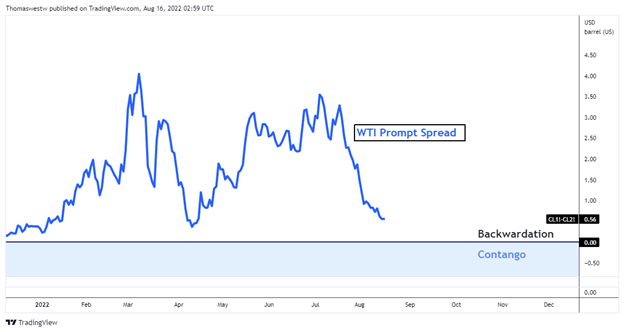 Crude oil prices broke below the 90 psychological level after falling further from the 20-day Simple Moving Average that. Prices have repeatedly failed to climb above that SMA since early July. The 61.8% Fibonacci retracement is underpinning prices but a break lower would threaten a zone of support not traded at since earlier this year.

Bitcoin Is Upbeat Above $20K as Investors Grow...