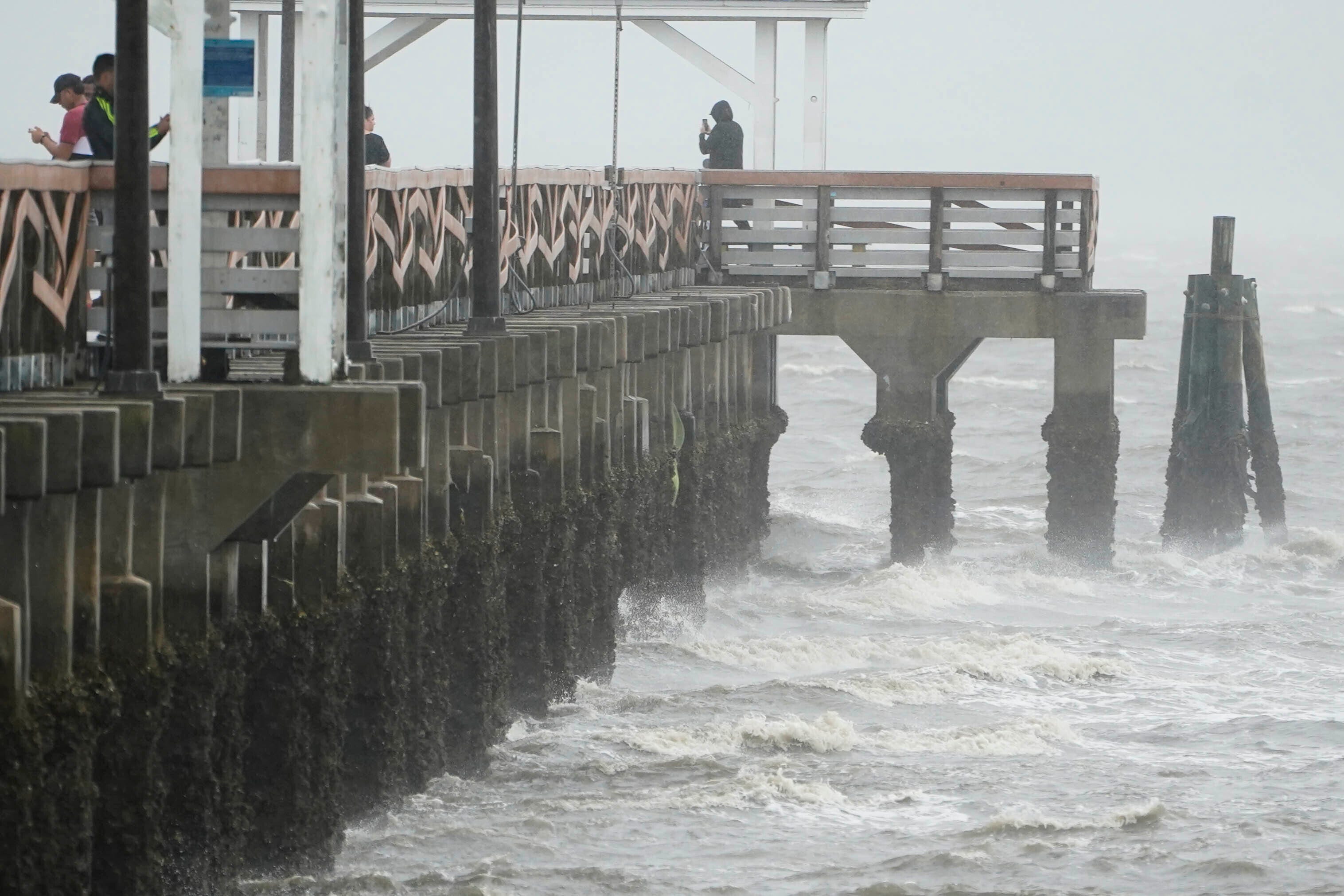 Hurricane Ian made landfall in southwestern Florida on Wednesday afternoon, just after 3 p.m. EDT — but the enormous damage is still being assessed. Several deaths so far have been attributed to the major storm.

The storm has left more than 2 million Florida residents without power.

While Ian has been downgraded to a tropical storm, it was expected to restrengthen later on Thursday, ahead of final landfall in South Carolina.

Fox News Digital communicated on Wednesday night and Thursday with Floridians taking shelter from the storm via social media, including a Facebook page, “Hurricane Ian Update and Recovery” — as well as with people from other states who were concerned about their loved ones caught in the storm’s path.

One person from the Jacksonville area wrote bluntly: “Power off. Water rising.”

Many others shared detailed message and stories. Here are some as the storm raged.

“I think everyone who evacuated is worried about what they will be coming back to, first and foremost,” said a woman named Yelena of Venice, Florida, via Facebook Messenger.

Waves crash along the Ballast Point Pier ahead of Hurricane Ian, on Wednesday, Sept. 28, 2022, in Tampa, Fla.
(AP Photo/Chris O’Meara)

“We evacuated when we heard it’s potentially landing in Venice at [a] category 4,” she continued, asking that her last name be withheld.

“We have kids and parents who really wanted … to evacuate, but they wouldn’t go without us.”

She added, “So, [we] made [a] last-minute decision yesterday late afternoon to leave.”

“Rebuilding yet again,” wrote a woman from Long Boat Key, Florida. “We just finished after Hurricane Eta in 2020. It’s a lot of physical, emotional and financial turmoil.”

She also said, “I don’t think people understand, even if you’re insured (and many working class people on barrier islands can’t afford premiums), homeowners end up footing a lot of the rebuild unless they spend years fighting. That option seems expensive as well.”

Heather Jeselskis of Maine told Fox News Digital that she has a sister in Ft. Myers, Florida, who on Wednesday night had not been heard from after the storm made landfall.

“She is on Markland Avenue in Ft. Myers,” Jeselskis wrote.

“I have tried to join Facebook groups in that area. I’m literally messaging complete strangers that live in that area for any information. It’s going on 22 hours now, no contact,” she noted as of Thursday a.m.

Then — later, on Thursday — Jeselskis messaged again with these joyous words: “OMG! She literally just made contact [with] our brother!”

“I am so relieved,” she said. “My emotions have been a rollercoaster. Barely got any sleep last night. I’m so thankful that she had the ability to make contact with someone.”

She wrote as well, “It’s a gut-wrenching feeling knowing that others are out there suffering.”

The danger wasn’t over for the sister in Florida, however.

“I don’t know how I’m supposed to get her from her trailer,” Jeselskis later messaged, “that has no roof (it’s been blown off). She needs help, she’s alone, 2 dogs.”

She added, “This has turned from a plea for contact to a plea for rescue.”

Texts between two sisters — one in Maine, one in Florida — as shared with Fox News Digital on Thursday, Sept. 29, 2022.
(Heather Jeselskis Swift)

Fox News Digital confirmed that Jeselskis was reaching out to authorities to try to obtain help for her sister.

‘What will still be standing?’

Holly Weyer of Cape Coral, Florida, evacuated to Miami ahead of the storm.

“Are our friends and family still alive?” she wrote. “What will still be standing? And how do we know when we can come back, and how quickly will that be?”

She also said, “Knowing that would at least allow us to make arrangements for housing. We need something actionable that we can do, because we feel so helpless. Blessed to be safe — but helpless.”

TROPICAL STORM AND HURRICANE SAFETY CONSIDERATIONS EVERYONE SHOULD KNOW

Weyer then shared an image of a pin drop on a map — directly in the path of the hurricane.

“They are all so calloused by being told repeatedly that a big storm is coming … then spending money on prep/evacuation … and then it doesn’t come to pass. Previous experiences created a false sense of confidence,” she added.

“The general public honestly believed nothing bad was going to happen.”

‘Concerned for people who stayed behind in coastal areas’

A woman who goes by the moniker Florida Jane in Pomona Park, Florida, chose to ride out the storm at home.

“We did not evacuate,” she wrote on Facebook. “We did for two other storms, and it turned out to be for nothing. We are not complacent, however. We are staying in our home.”

She added, “We live in Putnam County. It will not hit us until [Thursday], if it does at all.”

“My biggest concern in this area would be tornadoes and extended power outages. I’m concerned for people who stayed behind in the coastal areas.”

Later, she messaged, “Everything is great now! Power was only out for about an hour-and-a-half. Excellent linemen for FPL,” she also noted, referencing Florida Power & Light. “It is raining now but nothing substantial.”

Heavy traffic moved slowly on I-4 East as residents evacuated the Gulf Coast of Florida in advance of the arrival of Hurricane Ian on Sept. 27, 2022 in Four Corners, Florida.
(Win McNamee/Getty Images)

She also wrote, “Honestly, the build-up was exhausting, I am relieved that we were lucky, thank goodness. We were inland, and it was only somewhere near a [category 1 storm] when it hit the area.”

Chris Snyder of Jacksonville Beach, Florida, did not evacuate, as he was on the “opposite side of landfall” with no evacuation orders for his area.

“Watching the video of Ft Myers Beach,” he messaged. “I just wonder when Jacksonville might finally get its due. It was 1962 since we were struck. We have dodged so many bullets.”

He also said, “I can’t imagine what those people in southwest Florida are going through. I am a retired firefighter who has never been home for a storm in 25 years. I think I’ve been more stressed and worried not being at work.”

He added, “It’s crazy the difference in perspective, between being a first responder and now just being a civilian. Everyone stay safe!”

Later, Snyder messaged, “We dodged a bullet, I think. Very windy … probably 30-35 mph sustained, with gusts to 50-ish. I am not sure of any damage as of yet. We still have power, but many don’t further in town. We are about five blocks from the beach.”

He added, “I am afraid downtown Jacksonville area along the river might flood somewhat bad. We will see when the sun comes up more.”

Snyder then said people should visit www.Floridadisaster.org/report to share news of anyone who needed help, but strongly cautioned that this was not a substitute for 911 if lines are up.

People ‘have no idea of the condition of their home’

Bryan Gonzalez runs Drones Unlimited, a drone business in Crystal River, Fla. “If residents evacuate, they worry what happened to their home,” he wrote on Facebook.

“Usually they come back days after the storm because flooding and traffic. I fly drones for homeowners wanting to see their house condition and use the media for insurance faster.”

“I’ll be flying to Hernando Beach helping homeowners see their homes,” he later messaged. “These people left and have no idea of the condition of their home.”

‘Winds are too high’

Ora-Lee Phelan has a sister in Bokeelia’s Tropical Waters mobile home park; she said her sister did not evacuate before Hurricane Ian hit.

King Point resident Maria Esturilho is escorted by her son, Tony Esturilho, as they leave behind the damage from an apparent overnight tornado spawned from Hurricane Ian at Kings Point 55+ community in Delray Beach, Fla., on Wednesday, Sept. 28, 2022.
(Carline Jean /South Florida Sun-Sentinel via AP)

“All the reports say Pine Island is cut off and cell towers are down,” she wrote on Thursday.

She also said, “I’m on several Pine Island sites that are searching/rescuing. I have her on a list to search Pine Island.”

She added, “Her daughter tried to call the Lee County sheriff, but the phone lines are bad. They can only get to the island by boat and winds are too high.”

Amy Shever lives in Northern California but is from Florida.

“Sending out a list of shelters and hotels is not helpful to these demographics,” she also wrote.

“I volunteer online with disaster relief. Serious lack of resources for seniors and low income — fairly consistent throughout the U.S.”

Deirdre Reilly is a senior editor in Lifestyle with Fox News Digital.