How the U.S. Government Amassed $31 Trillion in Debt 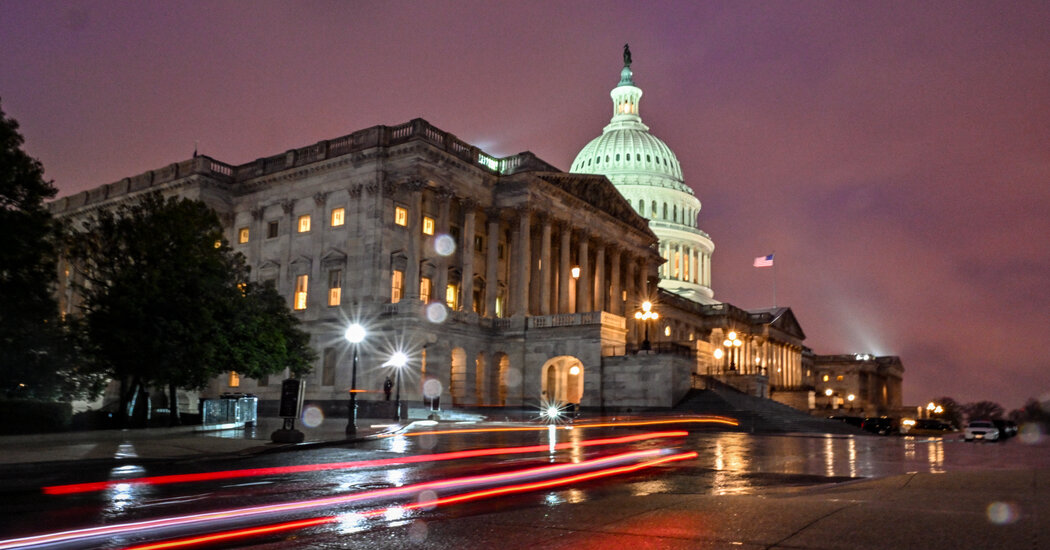 WASHINGTON — America’s debt is now six times what it was at the start of the 21st century. It is the largest it has been, compared with the size of the U.S. economy, since World War II, and it’s projected to grow an average of about $1.3 trillion a year for the next decade.

The United States hit its $31.4 trillion legal limit on borrowing this past week, putting Washington on the brink of another fiscal showdown. Republicans are refusing to raise that limit unless President Biden agrees to steep spending cuts, echoing a partisan standoff that has played out multiple times in the last two decades.

But America’s ballooning debt is the result of choices made by both Republicans and Democrats. Since 2000, politicians from both parties have made a habit of borrowing money to finance wars, tax cuts, expanded federal spending, care for baby boomers and emergency measures to help the nation endure two debilitating recessions.

“There have been bipartisan tax cuts and bipartisan spending increases” driving that growth, said Maya MacGuineas, president of the Committee for a Responsible Federal Budget and perhaps the pre-eminent deficit hawk in Washington. “It’s not the simple story of Republicans cut taxes and Democrats grow spending. Actually, they all like to do all of it.”

Few economists believe the level of debt is an economic crisis at the moment, though some believe the federal government has become so large that it is taking the place of private businesses, hurting growth in the process. But economists in Washington and on Wall Street are warning that failing to raise the debt limit before the government begins shirking its bills — as early as June — could prove catastrophic.

Despite all the fighting, lawmakers have taken few steps to reduce the federal budget deficit they have produced. It has been nearly a quarter-century since the last time the government spent less than it received in taxes.

Because spending programs today are so politically popular, and because retiring baby boomers are driving up the cost of programs like Social Security and Medicare every year, budget experts say it is unrealistic to expect the books to balance again for another decade or more.

The White House estimates that borrowed money will be necessary to cover about one-fifth of a $6 trillion federal budget this fiscal year — a budget that includes military spending, the national parks, safety net programs and everything else the government provides.

In just two decades, America has added $25 trillion in debt. How it got itself into this fiscal position has its roots in a political miscalculation at the end of the Cold War.

In the 1990s, America reaped a so-called peace dividend. It reduced spending on the military, believing it would never have to invest as much in national security as it had when the Soviet Union was a threat. At the same time, a dot-com boom delivered the highest federal tax receipts, as a share of the economy, in several decades.

What is the debt ceiling? The debt ceiling, also called the debt limit, is a cap on the total amount of money that the federal government is authorized to borrow via U.S. Treasury securities, such as bills and savings bonds, to fulfill its financial obligations. Because the United States runs budget deficits, it must borrow huge sums of money to pay its bills.

The limit has been hit. What now? America hit its technical debt limit on Jan. 19. The Treasury Department will now begin using “extraordinary measures” to continue paying the government’s obligations. These measures are essentially fiscal accounting tools that curb certain government investments so that the bills continue to be paid. Those options could be exhausted by June.

What is at stake? Once the government exhausts its extraordinary measures and runs out of cash, it would be unable to issue new debt and pay its bills. The government could wind up defaulting on its debt if it is unable to make required payments to its bondholders. Such a scenario would be economically devastating and could plunge the globe into a financial crisis.

Can the government do anything to forestall disaster? There is no official playbook for what Washington can do. But options do exist. The Treasury could try to prioritize payments, such as paying bondholders first. If the United States does default on its debt, which would rattle the markets, the Federal Reserve could theoretically step in to buy some of those Treasury bonds.

Why is there a limit on U.S. borrowing? According to the Constitution, Congress must authorize borrowing. The debt limit was instituted in the early 20th century so that the Treasury would not need to ask for permission each time it had to issue debt to pay bills.

As the 20th century ended, America’s coffers were flush with tax revenue and light on military obligations, a combination that many leaders thought would hold up well into the future.

It did not last a year.

Mr. Bush, a Republican, broke from historical precedent and did not raise taxes or issue war bonds to pay for those conflicts. (War bonds tend to pay lower interest than other government bonds, adding less to the debt.) Neither did his successor, President Barack Obama, who inherited those conflicts. The resulting spending added trillions of dollars to the national debt.

How Times reporters cover politics. We rely on our journalists to be independent observers. So while Times staff members may vote, they are not allowed to endorse or campaign for candidates or political causes. This includes participating in marches or rallies in support of a movement or giving money to, or raising money for, any political candidate or election cause.

The Defense Department estimated last year that the direct costs for the wars in Iraq, Syria and Afghanistan exceeded $1.6 trillion. Brown University researchers, who add indirect costs, particularly care for veterans of those wars and interest on the money borrowed to finance the military, found that the total cost was much higher: just under $6 trillion for all of America’s “War on terror” efforts in the wake of Sept. 11.

As military spending surged, federal revenue declined as a share of the economy. That decline was a direct result of tax cuts that Mr. Bush signed in 2001 and 2003. Those tax cuts were temporary, but in 2012, Mr. Obama struck a deal with congressional Republicans to make more than four-fifths of them permanent.

The Center on Budget and Policy Priorities, a left-leaning think tank, has estimated that from 2001 through 2018, those tax cuts and the additional interest costs of borrowing to finance them added up to $5.6 trillion — or about one-third of the additional debt the government had incurred in that time.

In 2018, a new round of Republican tax cuts signed by President Donald J. Trump — which did not include spending cuts to offset their cost — kicked in. They were passed by some of the same lawmakers now contending that the government must not raise the borrowing limit without first taking steps to rein in debt.

Some conservatives claimed those cuts would “pay for themselves” by boosting economic growth and tax revenue, but independent analysts disagreed. The nonpartisan Congressional Budget Office estimated in 2018 that the law would add more than $1.2 trillion to the debt through the 2022 fiscal year, even after accounting for increased economic growth.

“If you’re going to have less revenue, you have to be willing to control the spending,” said Douglas Holtz-Eakin, a former director of the Congressional Budget Office who now runs the conservative American Action Forum think tank. “The Achilles’ heel of the Republicans has been they love the tax cuts, but they are unwilling to be serious about spending.”

Mr. Gordon said it was much harder to calculate the deficit impact of the Affordable Care Act, Mr. Obama’s signature health care expansion. The act has pushed up federal spending on Medicaid and health insurance subsidies. But it also raised some taxes. And the changes it made to the health care system have contributed — at least to some degree — to a reduction in Medicare spending compared with previous projections, offsetting some or all of the spending increases.

“You clearly wouldn’t want to give the A.C.A. all the credit” for the reduction in Medicare spending, Mr. Gordon said in an email, “but I do think it had a meaningful impact.”

Mr. Holtz-Eakin estimates a larger deficit effect from the Affordable Care Act. He also faults lawmakers for not doing more in the last two decades to reduce the growth in spending on Social Security and Medicare, which have already come under financial pressure from the first waves of retiring baby boomers.

The biggest — and often bipartisan — drivers of debt have been the federal responses to two sharp economic downturns: the 2008 financial crisis and the 2020 pandemic recession. Shortly after Mr. Obama took office in 2009, inheriting a recession, he pushed Congress to approve a nearly $800 billion package of tax cuts and stimulus spending. Safety-net spending continued at high levels for the next several years as the economy recovered sluggishly.

Mr. Trump approved a much larger collection of aid packages, totaling more than $3 trillion, after Covid-19 swept the world in 2020. Mr. Biden took office the next year and signed a $1.9 trillion stimulus plan soon after.

Economists disagree on the size and design of those responses. But they generally agree that by borrowing money in a sharp downturn, the federal government helped revive the economy and protect people and businesses.

“Not all debt is created equal,” said Lindsay Owens, an economic sociologist who is executive director of the liberal Groundwork Collaborative in Washington. “When we’re making critical investments, and stimulus, coming out of a recession, there are a lot of economic benefits to keeping money flowing in the economy, keeping unemployment from reaching astronomically high levels, keeping small businesses from defaulting.”

It is difficult to fully assign responsibility to individual presidents or parties for total levels of debt, because policy decisions often influence one another. By one crude measure, debt has been a bipartisan pursuit: It grew by $12.7 trillion when Mr. Bush and Mr. Trump, both Republicans, were in office, and by $13 trillion under the Democratic administrations of Mr. Obama and Mr. Biden.

That calculation ignores the reverberations that policy decisions can have even after presidents leave office. Mr. Bush’s tax cuts, for example, are still reducing federal revenue. Charles Blahous, a researcher at George Mason University who studies the federal budget, tried in a recent paper to apportion blame to presidents and parties in Congress for the federal deficit at various times.

For the 2021 deficit, he wrote, Mr. Trump bore the most blame, even though he was out of office. Mr. Biden was the runner-up.