How Coronavirus Could Help Us Fight Climate Change: Lessons From The Pandemic 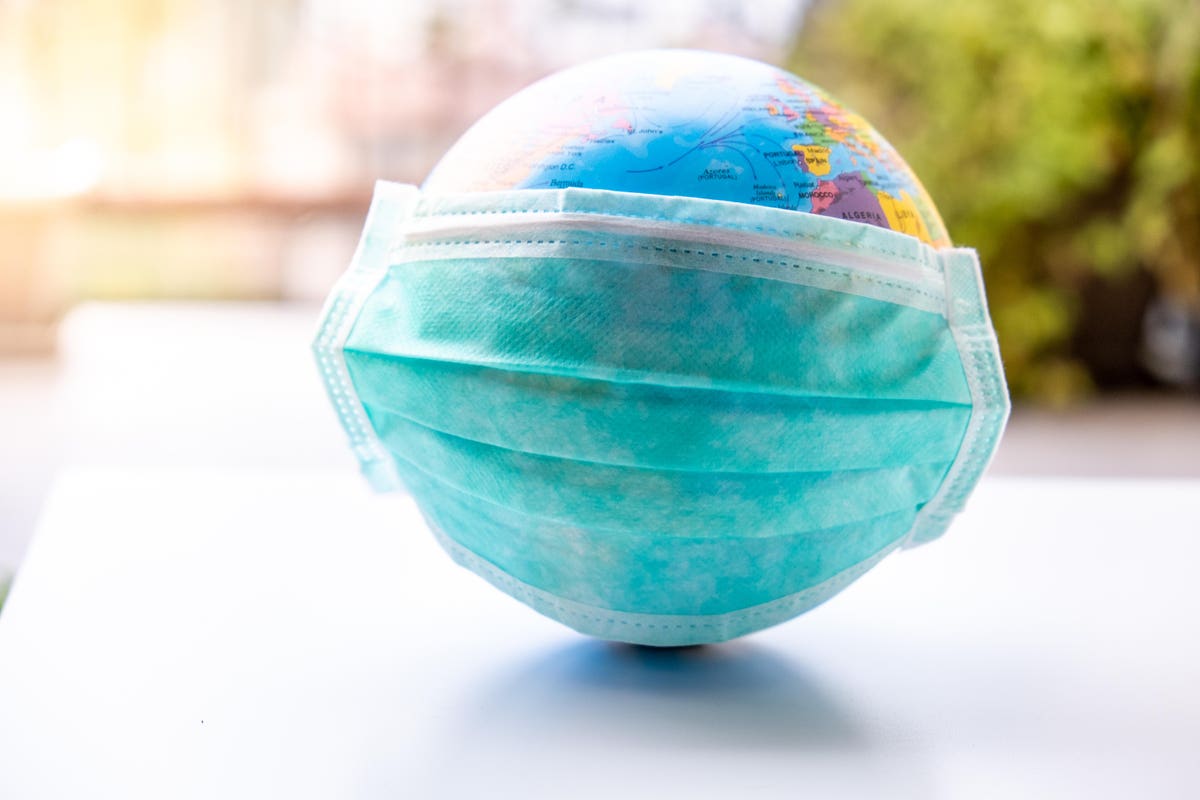 It is a truly global emergency. By March 30, 2020, the coronavirus pandemic had claimed more than 35,000 lives worldwide, with about 750,000 confirmed cases across more than 170 countries.

The speed with which the virus has spread has taken most governments apparently by surprise: in less than three months, the outbreak has all but shut down economies worldwide, putting millions of people into isolation, emptying the streets and the skies.

In this rapidly emerging new reality, lessons are being learned. Coronavirus, constituting an emergency unprecedented in modern times, has much to teach us about how civilization should deal with global crises. And in the view of Brazilian economist and former chief financial officer of the World Bank Dr Joaquim Vieira Ferreira Levy, the immediate danger of coronavirus has a great deal in common with the threat of climate change.

“One: it’s global. Two: it affects different people in different ways. Three: it shows the importance of government,” Levy says.

The first point is obvious: climate change and coronavirus share a similar magnitude, affecting every country on earth. With regard to the second, Levy notes that both crises affect different nations, and different communities, with varying degrees of severity.

“For example, wealthy people in wealthy societies are able to simply go home and not worry too much about their jobs, while there are multitudes that are much more vulnerable than us,” he says. The same calculus applies, in broad strokes, to climate change, which affects disproportionately the developing world—in particular Asia.

Levy’s third point focuses on the role of government in coping with crises. “The response of government can aggravate or decrease the problem. In Wuhan, for example, we saw how important public structures were, in spite of all the weaknesses: the fact that you have these hospitals; the fact that there was a rapid rush to find a vaccine; to build new facilities.” Other governments, Levy notes, have been far slower to react, leading to huge loss of life in countries such as Italy and Spain.

As with COVID-19, so with the climate emergency: the global community’s response to climate change has been slow at best; downright obstructionist at worst. Dr Barbara Buchner, Global Managing Director at the Climate Policy Initiative, says the weak response could be a consequence of contemporary society’s aversion to preparedness.

“The problem with selling prevention is that it’s very hard to see its success,” Buchner says. “I’ve been working in the field of climate change for many years and it’s been the same issue: climate change is invisible. But now we’re seeing some of the implications.”

The corollary with coronavirus is that governments have shown a tendency to wait until it’s too late to take serious action. Just as it has taken many nations too long to institute emergency protocols with the approach of coronavirus, meaningful climate action has been sluggish.

“With greenhouse gases you can’t see them; you can’t smell them; they don’t have an immediate health impact. It was very difficult to make the case for why we should reduce them,” Buchner says. “So we need to do a better job of explaining why these prevention and mitigation measures are critical for the economy, for people and for the health of everyone.”

This aversion to preparedness is connected closely to a phenomenon known in public health circles as the “paradox of prevention.” In defining this term, American physician Harvey Fineberg has identified several obstacles that stand in the way of a “practical acceptance of prevention,” including the crucial fact that when prevention succeeds, that success is invisible, leading to an absence of crisis.

It is a phenomenon with which Emilie Mazzacurati, founder and CEO of Berkeley-based climate risk analysis firm Four Twenty Seven, is familiar.

“Something that I’d like for us to try to explore a little more is how good preparedness pays off,” Mazzacurati says. “With coronavirus, we have a case where staying in confinement means hopefully you get the virus under control, but then you get a lot of critics saying ‘we shut down the economy for nothing.’ But had we not, we’re talking about deaths in terms of six, seven figures.

“If you do things right, it means you’re never proven right because you’ve prevented bad things from happening.”

In Mazzacurati’s view, this is the story that has played out with climate denialism.

“In the U.S. we have an administration and large parts of the media that don’t listen to science. If enough people die maybe they’ll review their thinking, but that’s a high price to pay,” she says.

Levy, too, thinks the public could draw parallels between the dual crises.

“A crisis like this brings to people’s minds that maybe the risk we’ve been talking about with climate change is not so far fetched; that actually all these extreme weather episodes of the last five years add up to something,” he says. “So we may see an expectation that government should respond accordingly.”

That, says Barbara Buchner, is one reason why efforts at rebuilding in the wake of the pandemic must take into account longer-term strategies, and incorporate sustainability at their core.

“Obviously the first priority here must be to protect the public health,” Buchner says. But there is no greater second priority than using this crisis to really accelerate the low-carbon transition that is already ongoing, because climate change is threatening our very civilization.”

Buchner believes that any economic stimulus plan ought to be geared not only to jump-start the global economy but to invest further in post-hydrocarbon infrastructure.

“This in turn will create new economic opportunities and also address a set of challenges—including making businesses more sustainable,” she says. “I think ultimately the real question is: do we lock ourselves into the use of fossil fuels in our infrastructure choices today, or do we instead use this crisis as a moment to accelerate the transition that is already on its way?”

Buchner and Levy point out that in both the U.S. and in Europe, employment in the renewable energy industry has been outstripping that of fossil fuel-based industries for some years.

But beyond capital investment, Levy is a keen proponent of regulatory reform, particularly in moments of crisis. Brazil, he notes, learned key lessons during another environmental crisis—namely the 2001 drought, in which a lack of rainfall led to that country’s all-important hydroelectric dams drying up, bringing widespread power cuts and delivering a crippling blow to the economy.

“We had to reduce the consumption of energy by 20% within the year. But instead of simply undergoing blackouts, we created market regulations. It was a huge amount of work, but it didn’t cost that much and improved the whole system. It also opened the way to renewables.” Indeed, according to analytics firm GlobalData, renewable energy now accounts for 82% of electricity consumed in Brazil.

“Reinforcing markets that are already strong; lowering trade restrictions where necessary—that’s the kind of thing that in normal times would be extremely complicated to do. But at this time, I think it’s worth taking the opportunity,” Levy says.

But do national governments have the foresight and the political will to push such changes through? This remains to be seen.

“I don’t think a lot of governments are going to feel terribly adventurous in how the money’s spent,” says Mazzacurati. “Uncertainty and credit crunch means fewer investors looking for non-traditional investments like renewables or green technologies.”

“This shock is so profound, perhaps it’s going to make people rethink how we do things”

On the other hand, she says, “this shock is so profound, perhaps it’s going to make people rethink how we do things. We’re already seeing that economies can adapt when there are sufficient incentives for them to do so.” This adaptability is reflected in the willingness and ability of corporations, from LVMH and Nivea to Dyson and GM, to reconfigure to produce medical equipment.

Adaptability also applies at the government level, to the question of large-scale stimulus packages, Levy says. He notes that while governments may have at first been slow to respond with financial support, the wheels are now turning. For instance Germany, following years of austerity, has indicated it will use coronavirus stimulus cash to rebuild infrastructure while adhering to green commitments.

“Also in France,” Levy says, “if you tie in the fact that they’re very much committed with EU plans in terms of sustainability [with the European Green Deal] in terms of 2050, I’m sure they will find ways to use the money for projects that are already agreed upon—there just wasn’t this push of money.”

“For many people who experienced World War 2, they saw the importance of government for bringing business together,” Levy says, pointing to post-war schemes as the Marshall Plan, which was used to regenerate Europe after years of conflict. In that era, social programs were also expanded: in Britain, for example, the National Health Service was founded in order to meet the health needs of all Britons, regardless of their ability to pay.

“It’s fair to say that over the last few years we’ve been a little bit shortsighted and too complacent,” Levy says. “This doesn’t mean you have to nationalize everything and become a permanent war economy, but you do have to put some value on some essential things.” National and global crises such as coronavirus and climate change, he says, make the case for robust government, requiring coordination of invidivuals, public and private institutions. “People cannot do this on their own. It’s a common effort, and the way to organize it is through government.”

Yet there are indications that some nations are heading in another direction. The world’s largest economy, the United States, last Thursday suspended the enforcement of environmental protection rules. That, Mazzacurati says, bodes poorly not only for Americans but for the wider world.

“The suspension of the enforcement of environmental regulations by the EPA has the potential to layer on additional public health crises—for example in the event of a toxic spill or water contamination,” she says. “It may cause lasting damage to ecosystems or endangered species. It will likely drive greenhouse gas emissions because of methane leaks.”

Beyond that, Mazzacurati fears that the signal the EPA’s move sends could be harmful in the long term.

The coronavirus pandemic is arguably unprecedented in its rapid impact on all our lives. It is truly devastating in its consequences. But in responding to it, denying the threat of our other global emergency could prove even more deadly. For while both crises share crucial similarities, the distinctions are just as vital.

“Coronavirus is a wave, like any plague,” Levy says. “But climate change is much more permanent. When it comes, it will stay. It won’t be solved in a matter of weeks or months, but a matter of years.” Levy ends with the analogy of a porcelain cup dropping to the floor and breaking.

“You can try to stick it back together,” he says, “but it’ll never be the same again.”