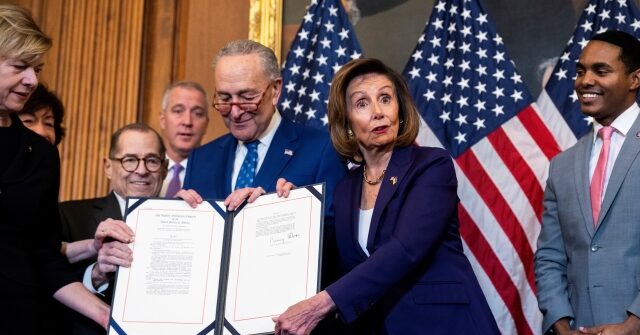 The legislation passed 258-169 with the help of 39 Republicans. All Democrats voted for the bill’s passage, one lawmaker voted “present” and four did not vote.

The vote comes a week after the Senate voted 61-36, with the help of 12 Senate Republicans, to advance the bill with the addition of a bipartisan amendment some lawmakers claim will protect religious liberty. However, faith advocates say that the amendment is basically useless and that the Respect for Marriage Act could be used to target Americans who believe that marriage is between one man and one woman.

The Senate notably rejected a religious liberty amendment from Sen. Mike Lee (R-UT) that would have prevented religious organizations from being targeted by the federal government under the law. Rep. Chip Roy (R-TX) proposed an identical amendment to Lee’s in the House and was also rejected.

President Joe Biden released a statement following the bill’s passage, saying he would “promptly and proudly” sign it into law.

The RFMA was introduced following the Supreme Court’s overturning of Roe v. Wade, due to Democrats’ unfounded concerns that the Supreme Court could use the Dobbs decision to overrule the Court’s Obergefell gay marriage decision. Overall, the RFMA would repeal the Clinton-era Defense of Marriage Act and would require the federal government to recognize any marriage that was “valid in the place where entered into.” The bill would additionally require every state to recognize every same-sex marriage that “is valid in the State where the marriage was entered into.”

The measure originally passed the House in July with the help of 47 Republicans, but Senate Majority Leader Chuck Schumer (D-NY) agreed to postpone a vote until after the midterms.

The Heritage Foundation reacted to the bill’s passage, saying “people of faith won’t forget this act by Congress.”

“The misnamed “Respect For Marriage Act” is bound for Biden’s desk. People of faith won’t forget this act by Congress. Rather, they’ll recommit to protecting our constitutional right to religious liberty & those who’ll face legal challenges and attacks in this horrible law’s wake,” the Heritage Foundation tweeted.

The misnamed “Respect For Marriage Act” is bound for Biden’s desk. People of faith won’t forget this act by Congress. Rather, they’ll recommit to protecting our constitutional right to religious liberty & those who’ll face legal challenges and attacks in this horrible law’s wake.

Kelly Shackelford, president, CEO, and Chief Counsel for First Liberty Institute, warned that the law “lets radical activists harass faith-based institutions in court because of their religious beliefs about marriage.”

“No American should be punished for holding a faith-based view on marriage, even if that view conflicts with the government’s current preferred definition.  And, no American should change their religious convictions about marriage just because a few politicians changed theirs,” Shackelford said.