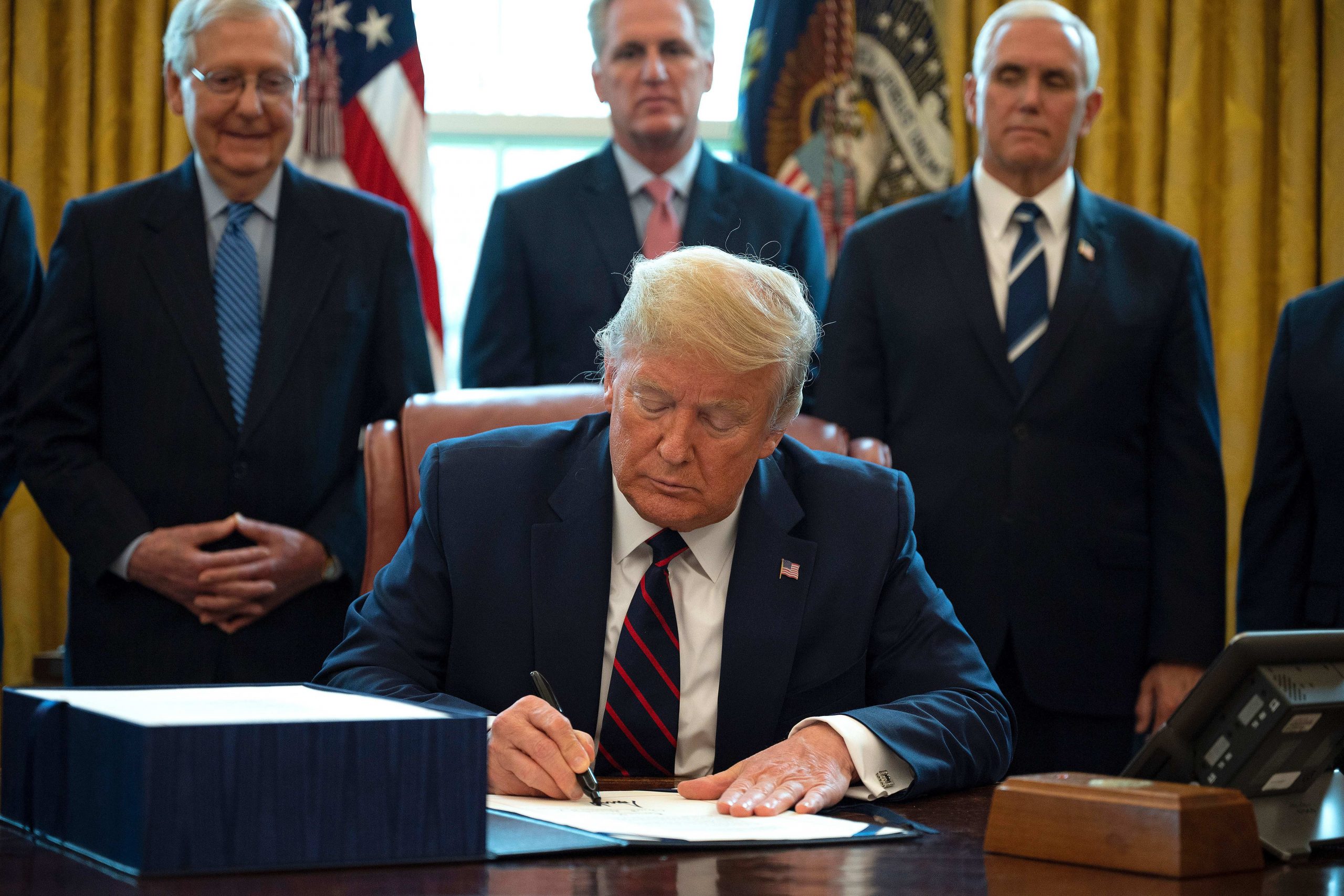 President Donald Trump signed a $2 trillion coronavirus relief bill on Friday, as Washington tries to blunt economic destruction from the pandemic ripping through the United States.

The House earlier passed the stimulus package, believed to be the largest in U.S. history, by voice vote, which simply measures if more lawmakers shout for “aye” or “nay” on whether to support it. The chamber scrambled Friday to block an effort to delay its passage.

Rep. Thomas Massie, R-Ky., tried to force a full yes or no vote on the measure, which could have pushed back its approval by hours. Irritated House members rushed back to Washington in cars and near-empty planes to head off his effort, and some eviscerated him for risking their safety. Trump called Massie a “third rate Grandstander” and said he should be booted out of the Republican Party.

The plan, which includes one-time payments to individuals, strengthened unemployment insurance, additional health-care funding and loans and grants to businesses to deter layoffs, got through the Senate unanimously on Wednesday night. House Speaker Nancy Pelosi had described the bill “as mitigation” of the pandemic’s destruction, predicting Congress will draft more plans to aid in “recovery.”

“I signed the single biggest economic relief package in American history,” Trump said in the Oval Office as his top economic advisors and Republican congressional leaders stood behind him shoulder to shoulder. “This will deliver urgently needed relief to our nation’s families, workers and businesses, and that’s what this is all about.”

While it is unclear how quickly the government will dole out some of the money such as increased unemployment benefits and small business loans, the White House and congressional leaders have said some individuals will receive direct payments of up to $1,200 within three weeks.

Trump signed the bill into law a day after data showed unemployment claims skyrocketed to a record 3.3 million last week, as businesses across the country closed to slow the disease’s spread. Hospitals, particularly in ravaged New York, have asked for more resources as they struggle to keep up with a rush of coronavirus patients.

The U.S. now has more than 92,000 coronavirus cases, the most in the world, according to data compiled by Johns Hopkins University. At least 1,380 deaths in the U.S. have been linked to COVID-19.

The moments before the House vote Friday underscored the risks the outbreak poses and the unconventional tactics Congress has deployed to pass recent bills to combat the disease. As representatives were called into the chamber, some fresh off last-second trips back to Washington, leaders urged them to use “proper social distancing practices.”

House leaders gathered a majority of members to block Massie from requesting a traditional recorded vote on the legislation. Representatives sat in the gallery usually reserved for the public to increase the distance among them.

Presiding over the chamber, Rep. Anthony Brown, D-Md., moved to pass the legislation by voice vote. Massie then asked for a full tally of “yes” and “no” votes. House leaders wanted to avoid that outcome. It would have forced lawmakers to go to the floor, in groups of 30 to avoid crowding, for a vote that could have delayed passage by hours.

In making his motion, the libertarian Massie said he wanted to ensure “our republic doesn’t die by unanimous consent in an empty chamber.” He argued the House did not have a quorum, or majority of members, present. Brown determined that it did, and the bill passed overwhelmingly by voice vote.

In an interview with a Kentucky radio station Thursday, Massie signaled he would oppose the bill because of its effect on U.S. national debt, according to the Louisville-based Courier-Journal.

After the vote, the House adjourned until March 31. The Senate does not have another vote scheduled until April 20, though Senate Majority Leader Mitch McConnell said the chamber could convene before then if it needs to take more action.

Pelosi gave extended remarks before the vote Friday as she waited for enough members to reach the floor. She joked, “the sooner you come, the shorter my remarks will be.”

The California Democrat stressed that “this cannot be our final bill” to respond to the crisis. She has outlined priorities such as bigger direct payments, expanded eligibility for family and medical leave and more grant money for states.

In closing, Pelosi thanked the front line workers who have risked their safety fighting the outbreak.

“Congress must show the same courage, same resilience and same strength … to put families and workers first,” she said.

Senate Minority Leader Chuck Schumer, D-N.Y., applauded the House’s action. But he put the onus on the Trump administration to use the money, including a $500 billion pool for business, state and municipal loans that fueled Democratic concerns, effectively.

“What the Congress cannot do is implement these well-constructed programs, so now it’s up to President Trump to execute them quickly, effectively, and in the manner in which they were drafted—to help the American people,” he said in a statement. “We ensured that the federal government has the resources and tools they need to make it happen, and we will be watching President Trump minute by minute to make sure he and his administration do it right.”