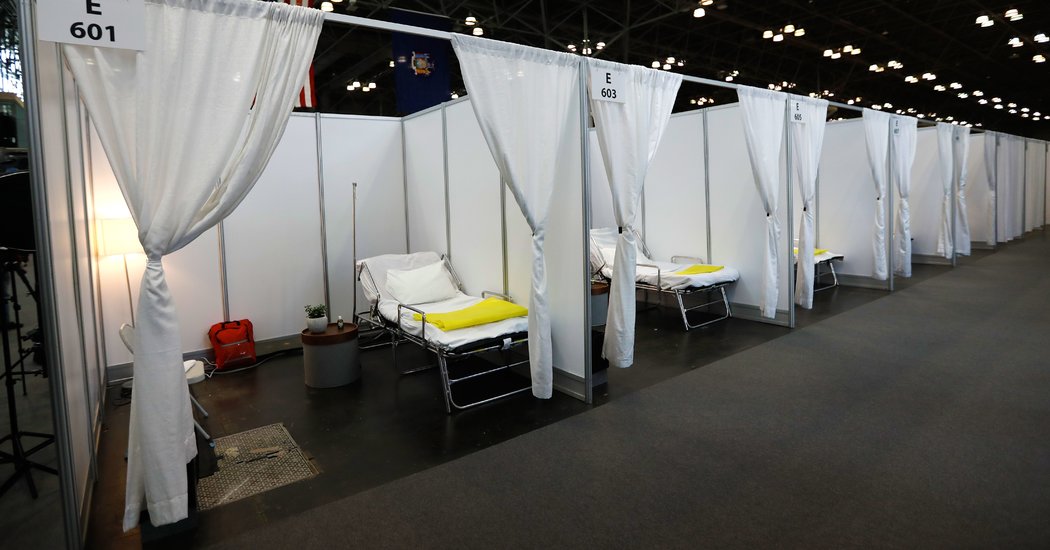 The federal government announced Monday that it was relaxing many of its usual safety standards for hospitals so they could expand services to fight the coronavirus pandemic.

The Centers for Medicare and Medicaid Services is changing rules on what counts as a hospital bed; how closely certain medical professionals need to be supervised; and what kinds of health care can be delivered at home. These broad but temporary changes will last the length of the national emergency.

“This is unprecedented flexibility,” said Seema Verma, the administrator for the centers, in an interview. “But with an unprecedented pandemic, we felt like it was the job of the agency to make sure those health care heroes on the front line had all the flexibility they needed to address the crisis at hand.”

FEMA and local officials have already begun unconventional expansions that would not meet normal federal standards, like the conversion of New York City’s Javits Convention Center into a temporary hospital facility. The new guidance would allow other communities to employ similar strategies.

It would also allow hospitals to undertake such measures themselves, without the involvement of FEMA. Hospitals could put beds into school gymnasiums, hotels, outpatient surgical centers, or in temporary structures in their parking lots.

The changes would also make it easier to separate patients infected with Covid-19, the disease caused by the virus, from others. Currently, hospital emergency rooms must see and stabilize any patient who enters their doors. The new rules would allow hospitals to set up triage centers that would direct patients to different facilities, according to their needs. It would allow the establishment of special hospitals, clinics and dialysis centers to treat only coronavirus patients, an effort to prevent those with other health needs from becoming infected.

Hospitals would be allowed to offer health care providers free meals, laundry or child care services — things that are typically barred under an anti-kickback law.

The rules being waived were originally put in place to ensure that patients would receive quality care and to deter health care fraud. But Ms. Verma said that it was important to give communities the ability to treat as many patients as possible given surging demand. “A lot of areas are operating in crisis,” she said.

The agency issued the changes through a series of waivers of normal law and by issuing a 221-page regulation. Normally, Ms. Verma said, such a regulation would take a year to write. But her staff was able to publish it in two weeks because of the circumstances, she said.

A message sent to providers from the Department of Health and Human Services’ office of the inspector general on Monday said investigators would be “minimizing burdens” and relaxing reporting deadlines, but continuing to look for malfeasance or fraudulent billing.

Hospital groups welcomed the changes, many of which they had requested in letters to the agency. “I’ve never been in a situation where hospitals needed so much relief, both regulatory and financial, and I’m impressed here that C.M.S. has really taken on the issue and analyzed it well,” said Chip Kahn, the president of the Federation of American Hospitals, a trade group for for-profit hospitals. The American Medical Association, the largest doctors’ group, also welcomed the new rules.

Many of the announced changes would still be subject to state approval. But Ms. Verma said she hoped the new federal guidance would smooth the way for states to make such changes as they see fit.

New rules for doctors would make it easier for medical providers to be paid by Medicare. The government is allowing doctors in private practice to immediately begin treating Medicare patients in hospitals as their services are needed, even if they are not certified as Medicare providers, or are licensed out of state. It will also relax rules about the supervision of medical trainees. Medical residents can now be supervised by senior physicians over video or telephone, instead of only in person.

Supervision requirements will also be loosened for nurse anesthetists, nurse practitioners and other health professionals who typically work under the supervision of a physician. States will have the final say over how independently those professionals will be allowed to work.

The agency says the changes are allowed by the president’s declaration of a national emergency. They will last only for the duration of that emergency.

The agency said Medicare would broaden the range of services it would pay for, including care that is not in a traditional medical office or hospital. It would also cover more digital visits called telemedicine as well as more services that can be delivered in a patient’s home, such as testing for the coronavirus. Those rules apply directly only to the Medicare program. But the largest trade group for private insurers has said it will match Medicare’s waivers of normal payment rules for coronavirus, meaning the changes may have much broader reach.

Ashish Jha, the director of the Harvard Global Health Institute, who has studied hospital quality and safety, said the new policies could provide an opportunity to better understand whether various safety regulations really make a difference. Over all, he said he welcomes efforts to expand access to care amid the outbreak.

“Right now, the urgent need is expanding capacity, expanding the ability to care for people,” he said. “If people can’t get the care at all, the quality is a secondary issue.”