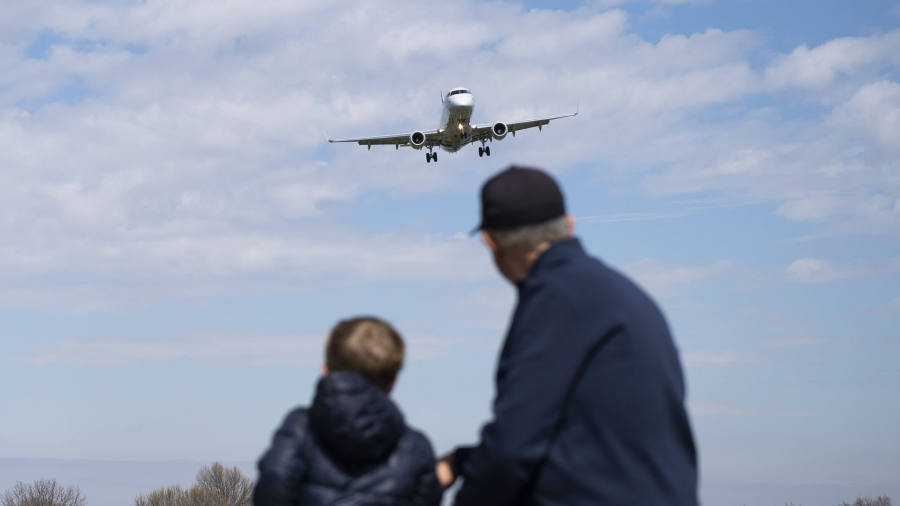 The grounding of thousands of aircraft across the world in recent weeks has cut the aviation industry’s carbon emissions in a temporary silver lining to the coronavirus pandemic.

But as and when the sector recovers in the wake of the global crisis that has brought much travel to a halt, the upward trajectory in aviation’s greenhouse gas emissions is expected to resume.

It is unclear whether the protracted lockdown will affect the timing of the industry’s target to halve net 2005 emissions by 2050. But the long-term goal of mitigating global warming will not change.

“Sustainable fuels are one of the major technological ways we will achieve sustainable aviation targets,” says Paul Stein, chief technology officer of Rolls-Royce, the aero-engine maker.

More than 215,000 commercial flights have used alternative non-fossil fuel since 2008, when Virgin Atlantic confirmed their viability on a Boeing 747 flight from London to Amsterdam. The jet used a biofuel derived from coconut and babassu oils, combined with ordinary jet fuel, in one of its GE engines.

The sustainable aviation fuels available today are made largely from plant material or even household waste. In recognition of controversy over biofuels produced from unsustainable sources, such as palm oil or other crops that require deforestation, most industry efforts are focused on feedstocks which can be produced without such environmental damage, such as waste oils from biological origin, agricultural residues and other non-fossil sources.

The substitution of biofuels for traditional kerosene jet fuel represents one of the quickest ways to bring down the industry’s emissions on a meaningful scale. Unlike electric or hybrid electric propulsion, sustainable fuels require little change to the architecture of current aircraft. Most of today’s jet turbines can take blends of up to 50 per cent biofuels. Rolls-Royce is in the process of verifying that its newer engines can take up to 100 per cent sustainable fuel, says Mr Stein.

The pressure to migrate to sustainable fuels has risen as the climate change crisis has become more urgent and air travel more frequent. The world’s fleet of 25,000 commercial aircraft generates roughly 2-3 per cent of global emissions. Before the pandemic-inflicted bankruptcies and layoffs, the longer-term outlook was for air traffic to double from 9bn passenger trips in 2018 to almost 20bn by 2040.

The rise of middle class populations in countries like India and China was also expected to drive greater appetite for international travel.

Roland Berger’s aviation consultancy estimates that by 2050 — even with improved engine efficiency — the aviation sector could account for close to 20 per cent of global emissions.

Yet despite the obvious need, commercialisation of biofuels has been stubbornly slow, at less than 1 per cent penetration of the market, as they remain significantly more expensive than conventional fuel. That matters to an airline when fuel is the single biggest operating cost.

“Even though commercial scale quantities of fuel are being produced — around 5m gallons a year — this is a small fraction of the jet fuel used each year,” according to Sean Newsum, director of environmental strategy at Boeing, the US aircraft maker now seeking government support as a result of the coronavirus crisis. “The problems are financial. The conventional jet fuel production supply chain has been built up over decades and it is extremely difficult for a small scale start-up facility to match those economics.”

Nevertheless there are companies such as World Energy of the US and Neste of Finland that are producing low carbon aviation fuels on a commercial scale. Several others are in the development phase, says Mr Newsum, “and are expected to be producing fuel within the next two to five years”.

California is proof that this strategy can work. Both state and federal incentives have closed the price gap. Now, “the majority of sustainable aviation fuel produced in the world is consumed in California”, he adds.