Asia Pacific markets face a mixed open after stocks on Wall Street closed mostly higher, and the US Dollar rose. The Federal Reserve’s latest meeting minutes crossed the wires, showing that the FOMC remains committed to tackling inflation. The latest US economic data showed signs that inflation might indeed be easing, with the ISM’s PMI data for June showing that prices paid by firms have decreased, albeit only slightly.

Across the pond, in the United Kingdom, Prime Minister Boris Johnson’s position in Her Majesty’s Government weakened further after another round of resignations, this time among more junior cabinet members. The British Pound traded at its lowest level since March 2020 against the US Dollar. For now, Mr.Johnson’s fate is uncertain as rules would have to be changed to call another no-confidence vote, and there has been no indication so far that resignation is forthcoming.

The Australian Dollar and New Zealand Dollar also fell victim to the stronger Dollar, with NZD/USD and AUD/USD trimming nearly 0.5% overnight. A staggering fall in commodity prices has pained the two currencies in recent weeks. This morning, Australia’s Ai Group Services Index for June fell to 48.8 from 49.2 in the prior month. Iron ore prices fell around 1% during US trading hours.

Oil prices fell again across the WTI and Brent benchmarks, with prices now below $100 per barrel as recession fears drag on demand expectations. Banks and analysts are starting to drop their year-end targets for the commodity after this week’s big drop, reversing lofty expectations for higher prices just a few weeks ago. Meanwhile, in Beijing, China, authorities are restricting access to many public venues to only those who are vaccinated.

GBP/USD remains below its June swing low, but prices appear to be attempting to rebound, although modestly. The recent weakness following a break below Pennant support may continue if bulls can’t recapture that level. The RSI and MACD oscillators are negative, and technically, the cross looks primed for more weakness ahead. 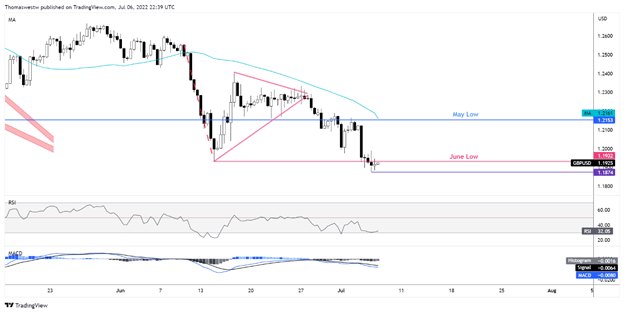