The first grain-carrying ship to depart from Ukraine since the Russian invasion has docked in the Syrian port of Tartus after it stopped transmitting its location signal early on Friday, according to satellite photographs.

The Razoni has become one of the world’s most closely monitored vessels owing to its status as the inaugural ship to leave the port of Odesa under a UN-brokered deal. The agreement opened a humanitarian corridor allowing the passage of cargo ships carrying Ukrainian grain — stranded in the country’s ports since the start of the war — through the Black Sea to Istanbul.

Since setting sail at the start of this month, the ship’s destination has been the subject of much speculation. The 26,500 tonne cargo failed to reach its originally stated destination of Lebanon after the buyer rejected it on quality grounds.

The shipment was then resold and, after unloading 1,500 tonnes of its cargo in Turkey, the vessel appeared to be headed to its next stated destination of Egypt. Then, on Friday, it stopped transmitting from its transponder, which broadcasts position and route information. The last signal was sent from the north-west coast of Cyprus.

According to images from Planet Labs, a satellite photography group, seen by the Financial Times, the Sierra Leone-flagged vessel appeared to dock at the port of Tartus in Syria on Monday. Tartus is also the site of a Russian naval base. Satellite photos from the European Space Agency appeared to show the vessel anchored just outside Tartus on Saturday.

Trading grain and food with Syria does not contravene western sanctions imposed on the Damascus regime over the country’s long-running civil war. But some vessels avoid sailing to the country openly because of the stipulations of financial institutions, according to grain traders.

So far 16 vessels have set sail from the Ukrainian ports covered by the UN-brokered grain deal — Odesa, Chornomorsk and Pivdennyi. 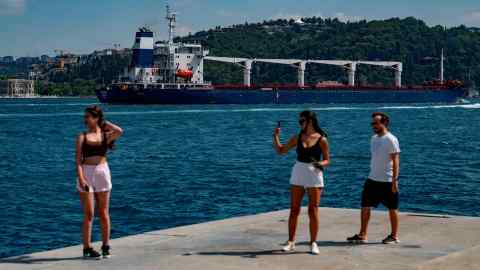 Contact details for the Razoni are not available and the FT has been unable to reach the company or the vessel’s crew.

The UN-led Joint Coordination Centre overseeing the deal did not respond to a request for comment on Monday.

The JCC has said its role is to ensure the safe passage of vessels carrying Ukrainian food exports between the grain corridor and Istanbul and to check whether vessels are carrying any unauthorised crew or cargo.

It has said it does not monitor where a vessel sails after it departs Istanbul and that final destinations can change depending on commercial activity that is beyond its control.