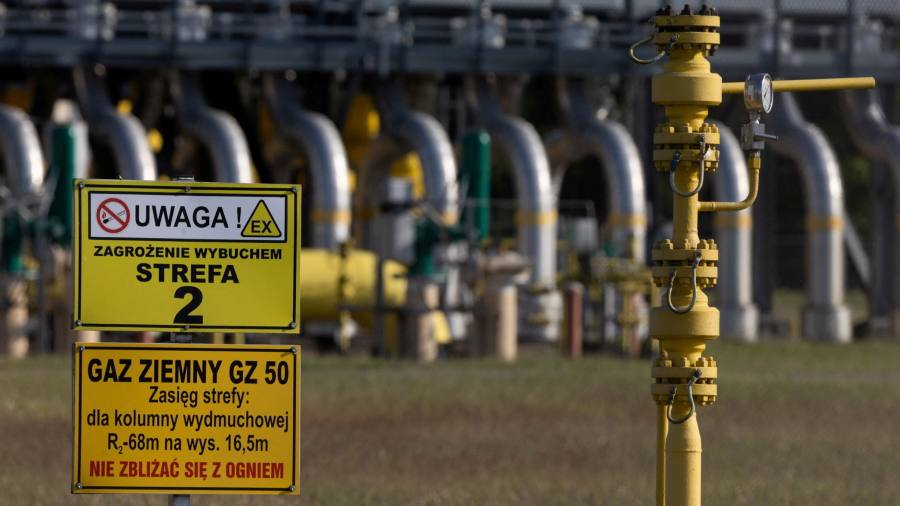 European gas prices climbed on Wednesday, after Russia warned it could restrict supplies to western Europe as early as next week, unsettling energy markets ahead of the winter.

TTF, the regional gas benchmark, rose as much as 6 per cent to €132 a megawatt hour in early London trading, extending Tuesday’s 9 per cent surge after Russia’s Gazprom accused Ukraine of taking gas meant for Moldova. Russia threatened to limit flows through the one remaining pipeline to western Europe as a result.

The wholesale European gas price has fallen sharply from an all-time high of around €310 a megawatt hour in August thanks largely to crimped industrial demand, higher than expected supply and lower domestic consumption. Gazprom’s move will nevertheless heighten worries over Europe’s energy supplies for the colder months.

Oil prices ticked higher on Wednesday, with Brent crude, the international benchmark, up 0.7 per cent at $88.96. West Texas Intermediate, the US marker, added 0.6 per cent at $81.50.

In equity markets, Europe’s Stoxx 600 opened 0.7 per cent higher and London’s FTSE gained 1 per cent. Contracts tracking Wall Street’s S&P 500 and those for the tech-heavy Nasdaq 100 both inched 0.1 per cent higher.

The US holiday for Thanksgiving, as well as football’s World Cup in Qatar, have reduced “liquidity and energy” from markets, said Kit Juckes at Société Générale. US equities nonetheless gained ground in the previous session.

Wednesday’s publication of the minutes from the Federal Reserve’s November meeting will be pored over by investors for hints of which way US monetary policy might be headed. Markets are pricing in a 77 per cent probability of a 0.5 percentage point interest rate rise in December, potentially ending four 0.75 percentage point increases in a row.

November’s cooler than expected price rises were enough to convince some investors that inflation has peaked, yet statements from Fed officials suggest the central bank could keep interest rates high for longer than markets anticipate.

The dollar has roared ahead this year but is down 4 per cent against a basket of six of its peers in November as investors bet that US interest rates are close to peaking. The currency fell a further 0.3 per cent on Wednesday.

The moves come as Covid-19 cases in China soar to record highs, leaving large parts of the country back in lockdown.