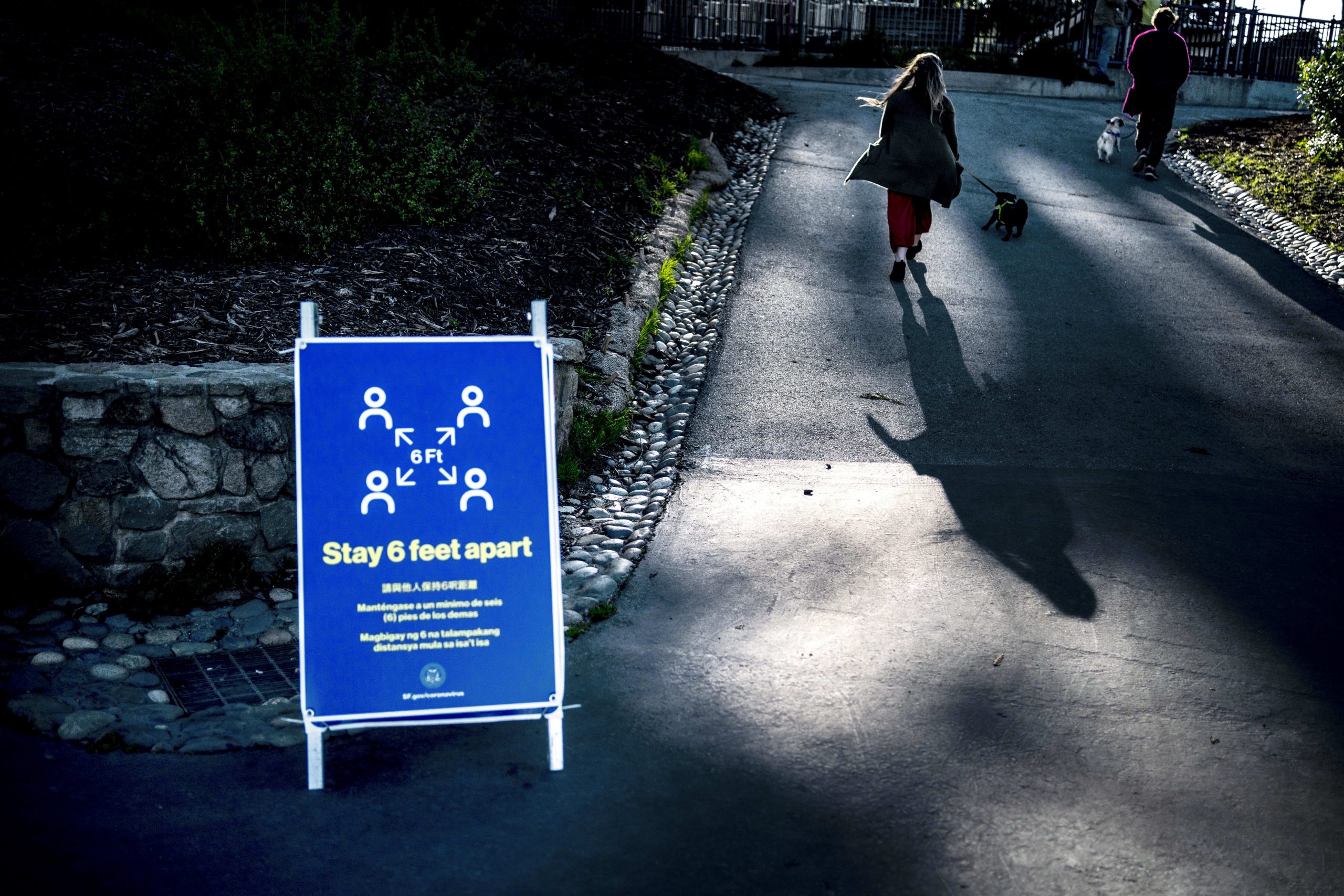 Cassandra Poggi, victim of domestic violence and advocate for those in the midst of domestic violence, walks her housemates dogs while obeying the stay-at-home orders issued by Governor Gavin Newsom during a world-wide coronavirus outbreak in San Francisco, California Wednesday March 25, 2020.

Domestic violence programs and shelters in New York, the state with the most confirmed coronavirus cases, are seeing a decline in at-risk clients as people stay home to prevent the spread of the outbreak. Trauma experts warn that this could lead to more abuse.

The outbreak has left women, in particular, with few opportunities to seek help as social distancing guidelines urge people to shelter in place, forcing some women to stay home with an abuser to avoid contracting the coronavirus.

Some women who are survivors of domestic violence have either fled shelters back to their abusers out of fear, or they have found that they have limited opportunities to seek out and receive support from domestic violence resource groups because of distancing guidelines.

The issue has attracted attention from some prominent politicians. Sen. Bernie Sanders, who is competing for the Democratic presidential nomination, has called for “emergency shelters” to be built for those fleeing domestic violence. Some existing shelters have said they are aiming to put survivors in hotels.

According to the Centers for Disease Control and Prevention, 1 out of every 4 women and 1 out of every 7 men go through physical violence at the hands of their partner. Women between the ages of 18 and 34 generally experience the highest rates of intimate partner violence, according to information from the National Domestic Violence Hotline.

Normally, domestic violence survivors who reside with their abusers have opportunities for short respites that come in the form of a trip to the grocery store or the need to drop kids off at school. Because of social distancing, these opportunities have been largely eliminated, leading to more periods of time spent with an abuser.

This story is based on conversations with officials from seven shelters and domestic violence programs in and around New York City. The problem exists beyond the hard-hit metropolitan area.

In other parts of the country, like Washington, D.C., the number of calls to hotlines from survivors have increased, according to The Washington Post, with one nonprofit, DC Safe, receiving more than 1,500 calls since March 8. Likewise, domestic violence shelters in Connecticut have seen an increase in the number of calls from survivors who are concerned about being stuck inside with their abusive partners because of the outbreak.

One shelter in New Orleans, which is becoming one of the hot spots for COVID-19, has reported a slowdown in new clients. WomenRising, a New Jersey shelter, has seen “a decrease in calls and requests for shelter,” but added that the shift is normal during a time of crisis.

New York, with more than 75,000 confirmed cases so far, is now regarded as the epicenter of the outbreak. Shelters and domestic violence programs in the state have reflected the hit, with fewer people choosing to stay there out of fear of contracting the virus or fewer people being able to access resources provided by these groups.

In the first week of March, just as the coronavirus was beginning to plant roots in New York state, Sakhi for South Asian Women, a nonprofit that provides services and resources to women affected by violence, saw the number of people calling its hotline decrease by 76% from the week before. The monthly calls overall decreased from 114 in February to 53 in March. In January, when President Donald Trump was assuring the country that the outbreak was under control, Sakhi received 166 calls.

Other New York shelters saw similar downward patterns as the virus spread and as health officials and the president strengthened their language in response to the pandemic.

Freedom House, an emergency shelter for survivors of domestic violence with disabilities that is operated by the nonprofit Barrier Free Living, is licensed for 95 beds and currently has 89 occupants.

“Some people have panicked and gone back to their homes to live with relatives because they felt like they’d be safer there,” said Paul Feuerstein, CEO of Barrier Free Living. “We are trying to counsel people by saying we are keeping the program as sterile as we can. But when people are cooped up in an apartment by themselves with their kids, there is lots of opportunity for people to worry about their current situations.”

On a larger scale, the National Domestic Violence Hotline has begun to receive calls from survivors who are specifically concerned about the coronavirus.

“The Hotline’s call, chat and text volume remains in the average 1,800-2,000 per day range. However, we are seeing an increase in the number of survivors reaching out who [are] concerned with COVID-19 and how their abusive partner is leveraging COVID-19 to further isolate, coerce, or increase fear in the relationship. Between March 10 and March 26 we have had 1,216 contacts who have mentioned COVID-19,” said Katie Ray-Jones, chief executive officer of the National Domestic Violence Hotline.

There are many reasons a survivor of domestic violence would opt to stay at home with their abuser rather than stay in a shelter. Sometimes survivors don’t have the economic means to leave. In recent weeks, people were instructed to stay indoors to avoid spreading and contracting the coronavirus.

To stay at Freedom House, survivors have to go through a screening that consists of giving the staff “a basic understanding of what the violence is” to ensure that those seeking shelter are actually fleeing violence, according to Cynthia Amodeo, chief program officer at Barrier Free Living. Because of shelter-in-place orders, it’s less likely that a survivor would walk in for that screening.

Survivors are always measuring risk, said Maureen Curtis, vice president of criminal justice and court programs at Safe Horizon, a nonprofit organization that has nine shelters throughout the five boroughs with total capacity of 800 beds.

“A woman who is in a violent relationship and is thinking about going into the shelter,” she said, “will say, ‘You know what? I don’t want to go into a shelter right now because I’m afraid of my children getting infected, living in a place where it’s a shared living space.” Many shelters in New York offer families fleeing domestic violence shared apartment space.

At many of these shelters and programs, the staff has taken drastic steps toward limiting face time with survivors.

Feuerstein of Barrier Free Living said the staff hosts teleconference calls in place of all the normal face-to-face activities to protect against the possibility of contagion. “Our front desk staff, we’ve had to change their schedules so they’re literally working 12-hour days, three days a week,” he said. “So they can begin to limit their risks of traveling on public transportation.” Staff members carry around a letter from Feuerstein and identification in the event that they are stopped while traveling to work.

Kavita Mehra, executive director of Sakhi for South Asian Women, said the front-line staff directly feels the impact. “We’ve tried to really create a separation between work and home. Now that all of us are working remotely, that separation no longer exists,” she said.

At The Dwelling Place, a private homeless shelter for women in Manhattan, the staff has reduced its capacity to just four women, from a typical 15, according to staff member Joann Sambs. Domestic violence is one of the primary causes of homelessness for women.

The shelter has also changed the way it puts on a weekly dinner for local elderly and homeless women, transforming the event from dine in to take out. While the shelter typically served 35 to 45 women, this week only about 20 women came, according to Sambs.

Limited face time often takes a toll on survivors, who are trying to get used to the new ways their programs and shelters are run.

Sakhi has transitioned entirely to teleconferencing services, offering therapy sessions, for example, online. In some cases, children are in the same room as their parents who are survivors, often making it harder for the survivors to speak candidly about their experiences and feelings. “The sessions are shorter. There are often shorter answers,” Mehra said.

It’s unclear how long the coronavirus is going to last, and while efforts are being made to curtail its spread, staffers at domestic violence programs and shelters are trying their best to plan ahead.

“Our concern at this point is that with shelter in place, with the kind of economic tensions that people are under, that domestic violence tends to go up threefold in these kinds of situations,” he said. “We’re trying to find a balance between being safe, helping people get stabilized and at the same time, taking people who are still in crises.”

For Mehra, executive director of Sakhi for South Asian Women, which doesn’t offer a shelter but instead provides resources and services to people dealing with domestic violence, the concerns revolve around the lack of opportunity to escape an abuser due to shelter-in-place orders.

She and her team have doubled down on conversations centered around safety planning, a series of actions domestic violence survivors might use to stay safe in a relationship. Actions can consist of creating a safety word with children to help them recognize when a situation is dangerous, memorizing the address of the local police precinct, knowing which local shelters are around them, having access to legal documents and keeping cash on hand, Mehra said.

“We have a client who is living with her perpetrator and they have experienced significant financial hardship as a result of the pandemic,” she said. “The perpetrator has made the decision to streamline expenses in the household, which include preventing her from keeping her cellphone and only allowing the family to keep his cellphone. Her entire lifeline has been stripped away because she’s now reliant on his cellphone.” The client, as a result, has significantly fewer chances to connect to the outside world for help if a situation arises.

Sahki for South Asian Women, like most domestic violence shelters or programs, receives some federal funding to support its operation. While private donors also fund the organization, Sahki is “preparing for a drop in funding in the next year” because of the economic toll of the coronavirus, Mehra said. Other organizations are following suit.

Harris Kluger from Sanctuary for Families said her organization also has concerns about being able to “continue the work at the level we do it,” despite receiving “generous” donations from private citizens and federal funding.

Curtis from Safe Horizon said it’s too “hard to tell at this point” how the coronavirus will affect funding for the organization. But she hopes “there will be some type of stimulus package that will recognize the need for programs such as ours.”

Resources for survivors of domestic violence:

The New York City Anti-Violence Project is an organization dedicated to ending gender-based violence. The AVP operates a 24-hour hotline in both English and Spanish. The organization can be reached at 212-714-1141.

The New York State Coalition Against Domestic Violence provides training, support and advocacy to domestic-violence programs across New York state. The number for its 24-hour hotline is 1-800-942-6906.

The National Domestic Violence Hotline offers a 24-hour hotline for survivors who need support or additional resources. The hotline can be reached by calling 1-800-799-SAFE or texting LOVEIS to 22522.

If you find yourself in an emergency situation or immediate danger, please call 911.