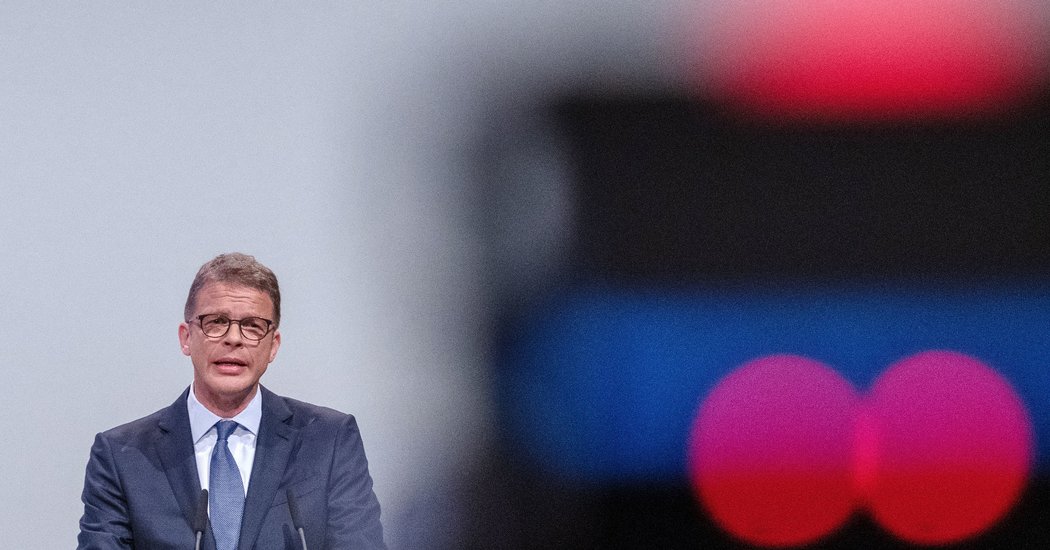 FRANKFURT — Deutsche Bank shareholders had plenty of reasons to be unhappy as they converged in a Frankfurt concert hall Thursday for the troubled lender’s annual meeting.

The question Thursday, as the shares sank another 2 percent, was whether investors were outraged enough to deliver an uncommon rebuke to top management — one that could put pressure on Paul Achleitner, the supervisory board chairman, to resign.

The result, after dozens of shareholders took a lectern to rail against Mr. Achleitner and other top managers, was mixed. Mr. Achleitner avoided an embarrassing vote of no confidence, but the margin signaled that a substantial number of shareholders are unhappy with his leadership. Investors also signaled dissatisfaction with Garth Ritchie, the head of Deutsche Bank’s money-losing investment bank.

Mr. Achleitner benefited from the forbearance of large shareholders who are not happy with his performance but fear the impact of further management turmoil. There is also a dearth of credible successors in Germany.

But she said the fund, which owns 0.4 percent of Deutsche Bank shares, would vote to ratify management. “We want to give Mr. Sewing and Mr. Achleitner a chance,” she said, referring to Christian Sewing, the chief executive.

Investors representing 72 percent of shares voted to ratify Mr. Achleitner’s performance, down from 84 percent last year and slightly lower than for other members of the supervisory board. Tepid support for Mr. Achleitner could put pressure on him to resign before his term ends in 2022.

Mr. Ritchie is also under pressure after his performance was endorsed by 61 percent, a sharp decline from 95 percent in 2018.

In a speech to shareholders, Mr. Sewing, who received 75 percent approval, promised that he would address problems at the investment bank, which will face “tough cutbacks.”

Sylvie Matherat, the bank’s chief regulatory officer, also was ratified by only 61 percent as shareholders registered their frustration that Deutsche Bank continues to be battered by scandal.

Normally the vote to ratify top managers at German shareholder meetings is an almost unanimous formality. But investors in European companies have recently shown their willingness to force change at troubled companies.

Last month, corporate Germany was shocked when shareholders in Bayer, the drug and chemical maker, voted not to ratify the performance of the management board. The investors were enraged by the company’s botched acquisition of American pesticide maker Monsanto.

It was the first time in memory that a German management had been confronted with such a vote of no confidence. It rattled boardrooms around the country and raised the question about whether Deutsche Bank’s top managers would face a similar insurrection. Mr. Achleitner is a member of the Bayer supervisory board and observed the revolt firsthand.

“It was a big moment,” Jim Rossman, a managing director at investment bank Lazard, said of the Bayer vote.

Mr. Rossman is head of a unit at Lazard that helps companies fend off attacks on management by hedge funds and other activist investors. He told reporters this month that the activist funds, often with the quiet support of big mutual funds, had lately been targeting European companies, demanding changes that they think will deliver a bigger payoff for shareholders.

The possibility of a no-confidence vote rose after shareholder advisory firms urged investors to send a message.

“We believe it is time for shareholders to hold the boards accountable for the many years of substantial monetary and reputational costs to the bank borne by shareholders,” one of the firms, Institutional Shareholder Services, said in a report this month that advised clients to vote against ratifying Deutsche Bank’s management and supervisory boards.

ISS and Glass, Lewis & Company, another influential advisory firm advocating a vote of no confidence, cited the damage inflicted on the bank’s finances and reputation by persistent money-laundering scandals.

On Wednesday, Deutsche Bank acknowledged that it had used faulty software to screen customer transactions for suspicious activity. The bank said it had alerted regulators and was working to fix the problem as soon as possible.

Mr. Sewing, the chief executive, promised Thursday to improve the bank’s internal controls. But he also suggested that the bank was unfairly targeted when German prosecutors raided company offices in Frankfurt in November as part of a money-laundering investigation. The negative media coverage “hit us hard,” Mr. Sewing told shareholders.

“It is, of course, a criminal investigator’s duty to conduct a thorough examination of any suspicious circumstance,” he said. “However, it’s possible to have diverging views on the manner in which it happened in November.”

“We still have no concrete evidence that would support the allegations against us or any of our employees,” Mr. Sewing said.

In response to questions from shareholders, Karl von Rohr, the bank’s chief administrative officer, defended its decision not to tell regulators about multiple transactions involving legal entities controlled by Mr. Trump and his son-in-law, Jared Kushner. The transactions, reported by The New York Times this week, were flagged by the bank’s anti-money laundering specialists.

“There are processes that in this case functioned,” Mr. von Rohr said. “There was nothing unusual” about the way the transactions were handled, he said.

Shareholders directed special wrath at Mr. Achleitner, a longtime mover and shaker in the German economy.

“I have had enough of the way you destroy our wealth,” said Karl-Walter Freitag, a shareholder activist who is a fixture at German annual meetings. “You’re by far the worst chairman the bank has ever had.”

“Have I made mistakes in the last seven years?” Mr. Achleitner responded. “Of course I’ve made mistakes. Am I the source of all the problems? Of course not.”