Deshaun Watson rusty in Browns debut: ‘I felt every one of those 700 days’ 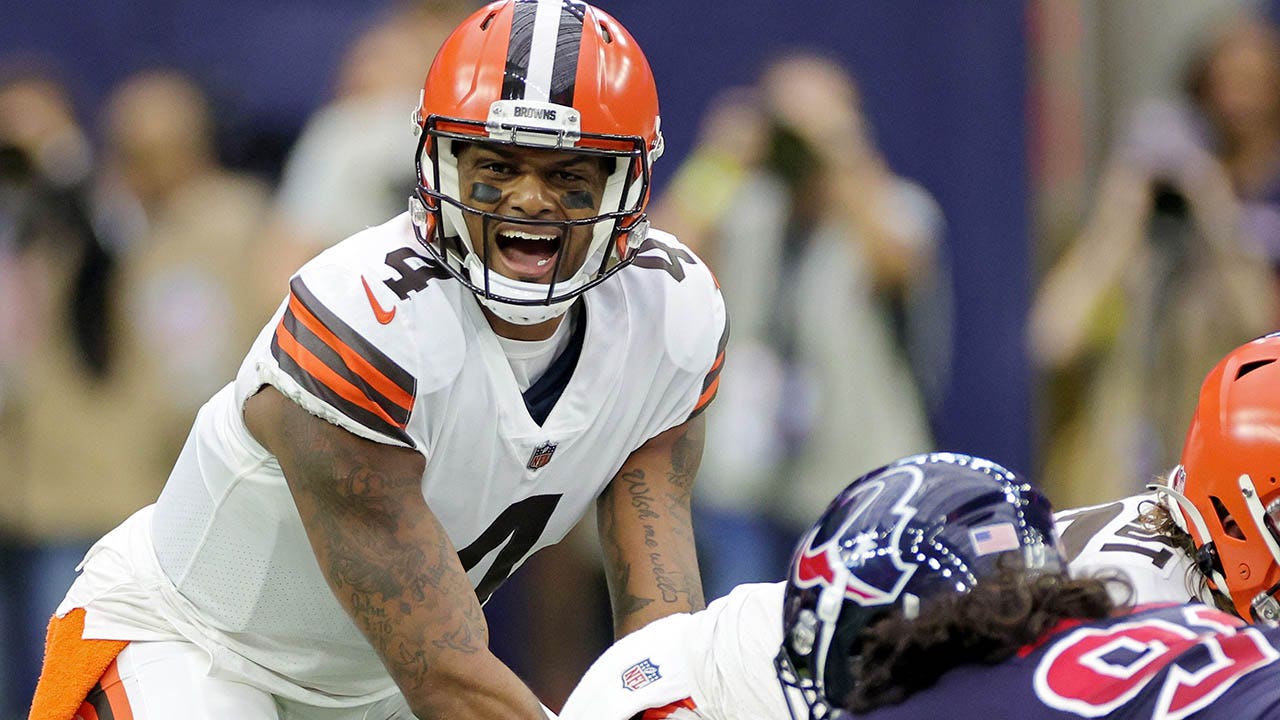 Deshaun Watson looked like a quarterback who hadn’t played a regular-season NFL game in 700 days.

Watson made his debut for the Cleveland Browns on Sunday against his former team, the Houston Texans, and was met with boos at the start of the game. Watson was traded from Houston to Cleveland earlier this year as he faced more than two dozen civil lawsuits accusing him of sexual assault. He was never criminally charged and was suspended 11 games to start the season.

Deshaun Watson of the Cleveland Browns looks on during the second quarter against the Houston Texans at NRG Stadium on Dec. 4, 2022, in Houston.
(Carmen Mandato/Getty Images)

But the rust was there.

Watson was 12 of 22 with 131 passing yards and an interception in the Browns’ 27-14 win, which was buoyed by the play of Cleveland’s special teams and defense. Watson found Donovan Peoples-Jones three times for 44 yards and Amari Cooper four times for 40 yards.

“I’ll just say I felt every one of those 700 days,” Watson told reporters after the game via Sports Illustrated.

Cleveland didn’t score on offense until a 43-yard field goal made it 17-8 with about 10 minutes remaining. Cleveland had two defensive scores in the game – a fumble-recovery touchdown from Denzel Ward and a Tony Fields II interception return for a touchdown. Peoples-Jones had a punt-return touchdown during the game as well.

Deshaun Watson of the Cleveland Browns speaks to the media after a game against the Houston Texans at NRG Stadium on Dec. 4, 2022, in Houston.
(Carmen Mandato/Getty Images)

It was Watson’s first start since Jan. 3, 2021, when he threw for 365 yards and three touchdowns against the Tennessee Titans. Soon after that, he would request a trade, and two months later, he was first accused of sexual misconduct on social media. Dozens of accusations in civil lawsuits followed, claiming that Watson sexually assaulted massage therapists during sessions.

Texas grand juries declined to bring charges against Watson, and he settled 23 of the lawsuits during the season. He agreed to the 11-game suspension and a $5 million fine. He would also have to undergo professional counseling and therapy for violating the league’s personal conduct policy.

Cleveland moved to 5-7 with the win.

Deshaun Watson of the Cleveland Browns calls a play during the first quarter against the Houston Texans at NRG Stadium on Dec. 4, 2022, in Houston.
(Carmen Mandato/Getty Images)

Browns coach Kevin Stefanski insisted after the game that Watson would remain the starting quarterback despite the struggles.

Ryan Gaydos is the sports editor for Fox News Digital.