( / ) ( / ) ( / ) ( / ) ( / ) ( / ) ( / ) ( / ) ( / ) ( / )
Trending Now
Trump campaign settles lawsuit, voids NDAs
FTX-tied townhouse in Washington DC unlisted: Report
Bitcoin [BTC]: The rest of the month may...
Russian, Ukrainian officials say dozens of soldiers were...
PancakeSwap’s momentum slowed- Will CAKE form a plateau...
What It Is and How to Calculate and...
Inside Relativity Space’s monster factory 3D-printing reusable rockets
How Can My Brother Buy My Share of...
27-year-old pays $1,850 to live in a former...
How to protect against crime in the metaverse
Home Markets Deshaun Watson faces boos as he makes Browns debut
MarketsNewsUS 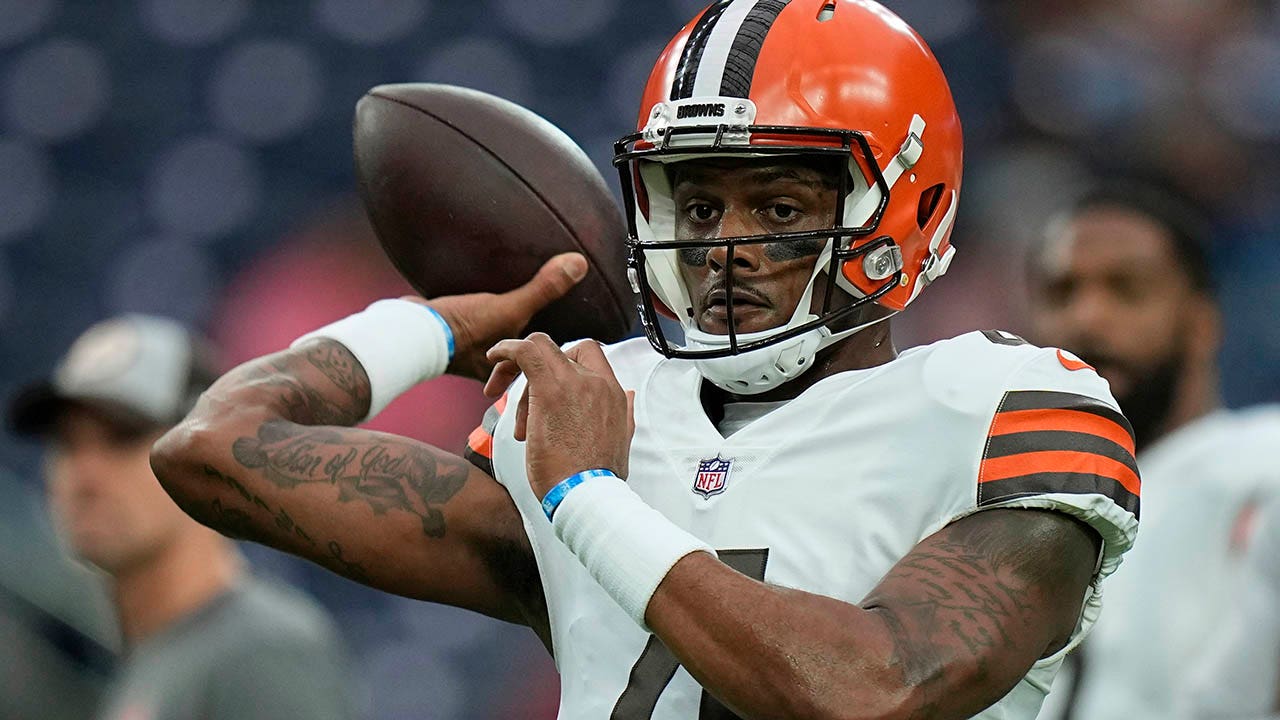 Deshaun Watson made his first appearance in a regular-season NFL game in 700 days for the Cleveland Browns on Sunday; as he didn’t play in 2021 due to his trade request from the Houston Texans and served an 11-game suspension over more than two dozen allegations of sexual misconduct.

Watson returned against his former team at NRG Stadium in Houston and was showered with a ton of boos as he made his way onto the field.

He addressed the media for the first time since August after his suspension was announced. He chose to begin Thursday’s press conference with an opening statement expressing his excitement to be back on the football field, but he also said that “with my legal team and my clinical team, there’s only football questions that I can address at this time.”

Cleveland Browns quarterback Deshaun Watson warms up before the game against the Houston Texans in Houston on Dec. 4, 2022.
(AP Photo/Eric Gay)

“I’m focusing on football,” he continued. “My main focus is locked in on the game plan and trying to execute and make sure that I’m keeping the standard up for the Cleveland Browns, so we can try to win.”

Cleveland Browns quarterback Deshaun Watson signals to fans before the game against the Houston Texans in Houston on Dec. 4, 2022.
(AP Photo/Eric Gay)

Watson has settled 23 civil lawsuits accusing him of wrongdoing. Two additional suits, including one filed in October, are pending. He wasn’t criminally charged.

He signed a five-year, $230 million contract with the Browns in March, but he declined to mention what he learned during his punishment or if the league-mandated counseling helped.

Watson claimed he isn’t worried about the potentially negative reception inside NRG Stadium.

Cleveland Browns quarterback Deshaun Watson calls a play during the first half against the Houston Texans in Houston on Dec. 4, 2022.
(AP Photo/Eric Christian Smith)

“I’m focusing on just being the starting quarterback and executing the game plan,” he said. “That’s my main focus. I’m not worried about the atmosphere. I have to go in and execute the game plan.”

Ryan Gaydos is the sports editor for Fox News Digital.