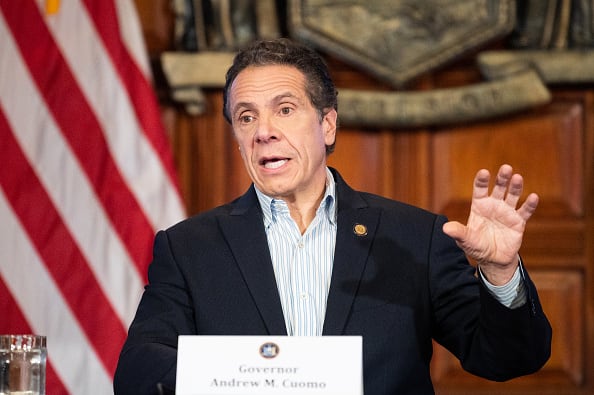 New York Gov. Andrew Cuomo said Monday that he refuses to get in a political fight with President Donald Trump amid their efforts to combat the coronavirus pandemic.

“I’m not going to engage in politics,” Cuomo said at a press conference from the Jacob K. Javits Convention Center, which was converted into temporary hospital space by the U.S. Army Corps of Engineers last week.

“Forget the politics! We have a national crisis. We are at war.”

Days earlier, Trump suggested he would treat governors differently if they weren’t “appreciative” of his administration’s efforts to slow the spread of the virus in their states.

Cuomo and Trump have been largely complimentary toward one another — but they have traded shots over the coronavirus, as well.

After Cuomo said in mid-March that the federal government “has been behind from day one of this crisis,” Trump replied on Twitter, “Cuomo of New York has to ‘do more.'”

Cuomo was quick to hit back: “I have to do more? No — YOU have to do something! You’re supposed to be the President.”

Last week, the two men clashed over whether the draconian restrictions being imposed to “flatten the curve” of coronavirus transmission should be lifted in an effort to quickly revive the U.S. economy.

Cuomo was asked at the presser Monday afternoon if he was unwilling to lock horns with the Republican president. Both political leaders have approved extreme measures to contain the virus in New York, the U.S. epicenter of the crisis.

“How many years have you known me?” Cuomo responded with a smirk. “I’m a tangler!”

But “I am not engaging the president in politics,” Cuomo said.

Cuomo added that he was not running for president. In a Fox News interview Monday morning, Trump said, “I wouldn’t mind running against Andrew. I’ve known Andrew for a long time. I wouldn’t mind that but I’ll be honest, I think he’d be a better candidate than sleepy Joe.”

Cuomo said he took Trump’s suggestion as a “compliment” that stemmed from a recent poll showing widespread approval toward the governor’s handling of the outbreak.

“I just want partnership to deal with” the coronavirus outbreak, Cuomo said. “Look, when you do good things for my state and you’re a good partner, I will be the first one to say, ‘You’ve been a good partner.’ And I have.”

“If I believe New York is not being served — the federal legislation that they passed — I will say that, too,” Cuomo said, referring to the $2 trillion stimulus bill Trump signed into law last week. Cuomo called that bill “reckless” and “irresponsible” because it did not provide enough money to cover New York’s projected revenue loss.

On Friday, Trump said he had instructed Vice President Mike Pence not to call governors who have not been “appreciative” of his administration’s efforts in their states.

“If they don’t treat you right, I don’t call,” Trump said at the time.

Trump said that Pence, who leads the U.S. response to the coronavirus, “calls all the governors. And I tell him, I’m a different type of person, and I say, ‘Mike, don’t call the governor of Washington. You’re wasting your time with him.'”

“Don’t call the woman in Michigan. It doesn’t make any difference what happens,” Trump also said he told Pence.

But the president noted that Cuomo had complimented him publicly.

In the press conference Monday, Cuomo called on health-care workers across the country to travel to New York to help the state deal with the flood of COVID-19 cases that are overwhelming medical facilities.

“Help New York. We are the ones who are hit now,” Cuomo said in the makeshift hospital at the Javits Center.