Crude Oil Price Climbs Ahead of OPEC+ Meeting and a Sunny Outlook. Where to for WTI?

Get Your Free Oil Forecast

Crude oil prices have been going into Wednesday as speculation swirls of a cut to production from OPEC+ at their meeting later today and a rosier outlook on risk assets in general.

A reduction in supply from the cartel has been estimated by some in the market to be as high as 2 million barrels per day (bpd), up from previous estimates of around 1 million bpd.

An issue in announcing such a curtailment is that many oil producing countries in the club are unable to meet current quota targets. Any trimming of the quota may not materially impact actual supply.

The latest read to the 27th of September revealed 226k contracts long which is down from 240k the week prior and nearing the 6-year low seen in August of 210k.

Seasonality for black gold over the past 5-years has seen favourable moves through to near the end of October before seeing declines going into the end of the year.

How to Trade Oil

An indication of underlying supply and demand dynamics within the oil market is backwardation. It occurs when the contract closest to settlement is more expensive than the contract that is settling after the first one.

It highlights a willingness by the market to pay more to have immediate delivery, rather than having to wait. Backwardation has been ticking up and this could indicate that near term bullish price pressures may be emerging.

Volatility in the oil market, as measured by the OVX index, has also been nudging higher and may reveal that there are growing concerns for the future direction of the oil price.

The backdrop for commodities has been aided this week by a perception that peak hawkishness from central banks might be behind us.

The Reserve Bank of Australia (RBA) raised rates by 25 basis points to 2.60% on Tuesday, which was less the 50 bp forecast. This led to speculation that other central banks might be on a similar wavelength.

Those hopes were dashed somewhat by the RBNZ hiking rates by 50 bp today but it hasn’t shown up in price action yet, with equity markets still buoyant post decision.

The positive mood in markets has seen the US Dollar ease, allowing crude oil and other commodities continue to hold onto recent gains so far today. 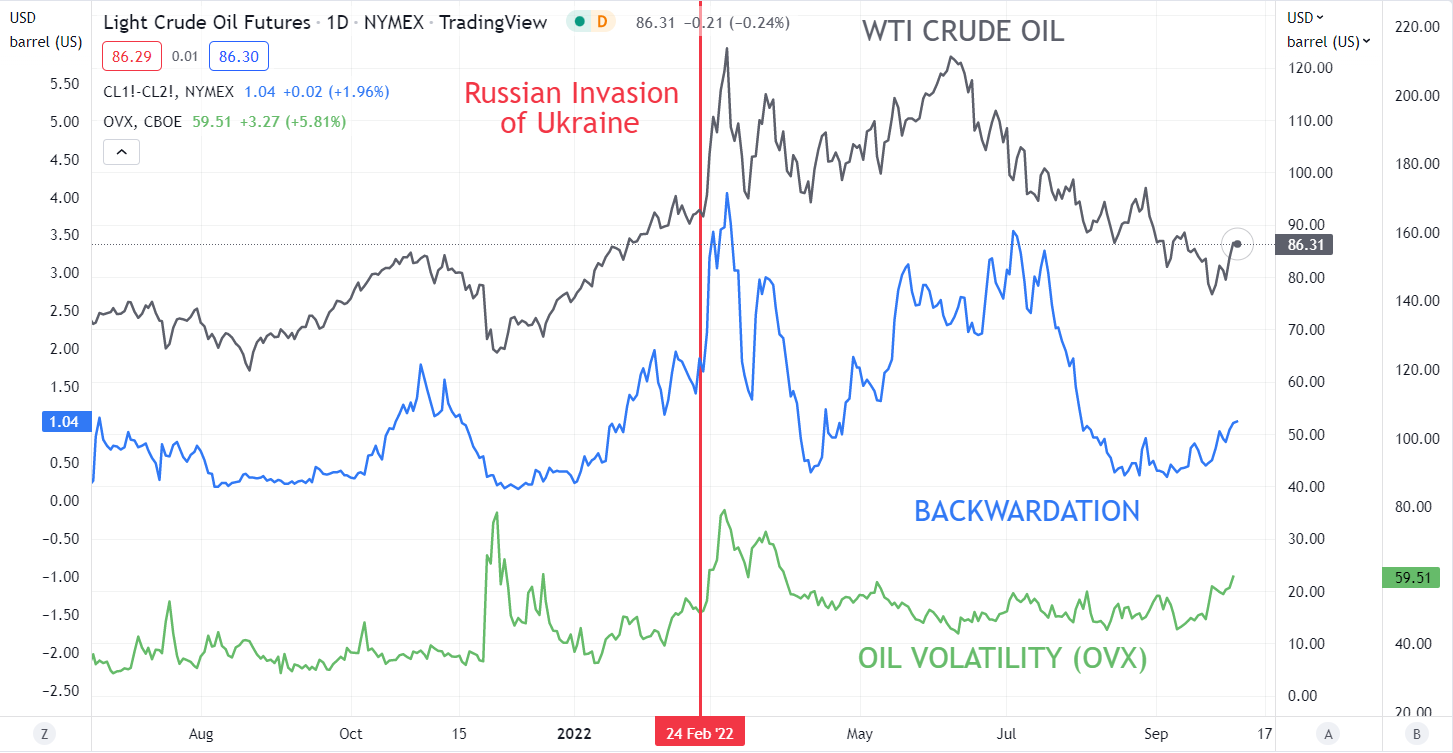