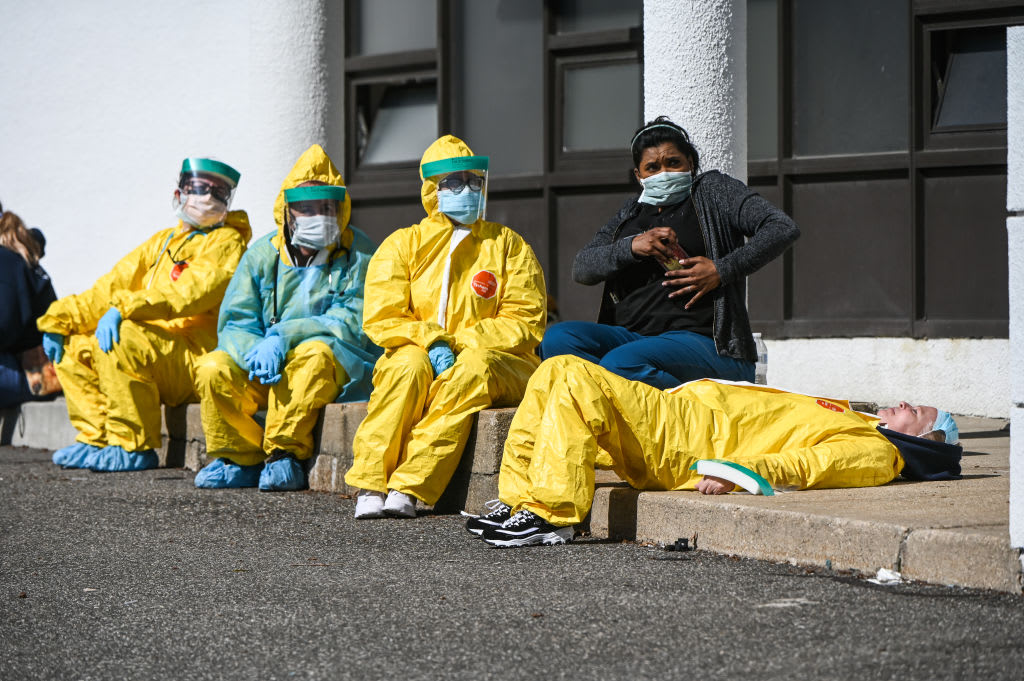 Health care professionals take a break awaiting patients as they test for COVID-19 at the ProHEALTH testing site in Jericho, New York, March 24, 2020.

Researchers are warning that the coronavirus pandemic could inflict long-lasting emotional trauma on an unprecedented global scale. They say it could leave millions wrestling with debilitating psychological disorders while dashing hopes for a swift economic recovery.

The COVID-19 crisis has combined mental health stressors that have been studied before in other disasters, but which have never been seen consolidated in one global crisis, experts in trauma psychology said.

It has left millions without jobs, sent billions into isolation and forced nearly everyone on earth to grapple with the feeling that they or those they love are suddenly physically vulnerable. The nature of the disease means that there can be no certainty about when the worst will pass. Hundreds of thousands have been infected, thousands have died, the virus continues to spread, and a vaccine could be more than a year away.

“The scale of this outbreak as a traumatic event is almost beyond comprehension,” said Yuval Neria, the director of trauma and post-traumatic stress disorder at the New York State Psychiatric Institute and a professor of psychology at Columbia University Medical Center.

Neria, seeking a precedent to point to, said that not even the Sept. 11, 2001, terrorist attacks or World War II were adequate comparisons, as the anxiety those events caused was at least limited by geography. In this case, he said, “there are no boundaries.”

Elana Newman, who researches trauma and disaster mental health at the University of Tulsa, said she has had to consult the literature of several different subjects to get a handle on the unfolding crisis. There is research on how humans cope with quarantine, mass disasters and ongoing stressors, she said, but not on all three.

“This is a mass community disaster, but it is also a little bit like terrorism in that the fear component is there, ongoing fear,” Newman said.

A question of recovery

More than half a million cases of COVID-19 have been confirmed worldwide, leaving nearly 30,000 dead, according to data from Johns Hopkins University. The United States surpassed China and Italy on Thursday to become the country with the largest outbreak, and now has more than 100,000 cases.

The public health disaster has become a financial catastrophe, halting the 11-year bull run in the stock market and sending weekly jobless claims to a record nearly five times higher than the worst of the 2008 recession this week.

President Donald Trump and members of his administration have predicted that the economic recovery will be swift once the outbreak is contained. On Tuesday, Trump said on Fox News that he “would love to have the country opened up, and rarin’ to go by Easter.” Vice President Mike Pence said on Friday that the economy would “come roaring back once we see our nation through this.”

On Friday, the president signed a stimulus package, worth more than $2 trillion, intended to blunt the economic damage from the pandemic.

But estimates of a v-shaped recovery aren’t factoring in psychology, according to Peter Atwater, a behavioral economist at William & Mary who studies consumer decision-making.

“You can open it up. But this is not a field of dreams. You can build it, but they might not come,” Atwater said. He predicted that as a result of the crisis, emotionally scarred consumers are likely to spend less and save more — a type of “Great Depression mindset.”

“There were no skid marks — the car went straight the into the wall,” Atwater said. “That sense of vulnerability will be quite lasting.”

Andrew Rigie, the executive director of the NYC Hospitality Alliance, a nonprofit advocating for the city’s bars and restaurants, said he was concerned that anxiety and fear from the virus could outlast the pandemic itself, possibly prolonging the economic woes saddling the industry and the city. He said he hoped that anxiety would not “override human nature’s pull to bring us together.”

‘A harder time bouncing back’

Those who are financially crippled by the crisis or who experience the loss of loved ones are also the most susceptible to enduring psychological trauma, according to experts. Those who already had mental health problems, such as addiction, are also at risk.

“What we know from mass disasters is that the people who have experienced direct interpersonal loss or financial loss have a harder time bouncing back,” Newman said.

Researchers at Peking University in Beijing wrote in a February correspondence in The Lancet, a prestigious medical journal, that the mental health disorders inflicted on those on the front lines of the crisis could “exceed the consequences” of the virus itself.

But trauma experts say that relatively new research has shown that even those who are not directly affected by the crisis are at risk for post-traumatic stress disorder.

“After 9/11, we had the first indication that even people who were not directly exposed to trauma, but spent many hours in front of the television or looking at their smart phones were at high risk for psychopathology, including PTSD, depression and anxiety,” Neria said.

Neria said that given the global scale of the current pandemic, it is likely that millions will need mental heath care. Right now, he said, the focus was not on mental trauma. But that could change.

“I hope we will be ready for this. People will need us,” Neria wrote in an email.

“We’re all concerned about the immediate critical need. The life and death of the immediate situation, which is right,” Cuomo said during a press conference announcing the support line. “But don’t underestimate the emotional trauma that people are feeling, and the emotional health issues.”

Those who suffer from mental health disorders can be treated with therapy and, in some cases, medication. Exposure-based treatments for post-traumatic stress disorder, which involve survivors recalling and describing the traumatic event, work about half the time, according to Neria. For the other half of patients, studies have shown other methods to be effective.

But experts say there are steps that individuals can take even while the crisis continues that can limit its psychological toll, such as limiting exposure to television news and social media.

“Each person needs to figure out, what is the optimal amount of information they need to make choices,” Newman said.

How can you feel good about yourself in this situation? … Doing something for your community, for your family, for someone.

Social media is particularly fertile ground for anxiety-inducing information and disinformation, which can exacerbate anxiety and cause PTSD. The risks are compounded for people who binge social media before bed or during isolation, with a limited support network.

Newman said that it was also important to stay in contact with friends and family members, and try to take charge of the things that you can still control.

“How can you feel good about yourself in this situation? Can you volunteer virtually? Checking up on your neighbor,” she said. “Doing something for your community, for your family, for someone.”

“At the end of the day, our traumas, the way they manifest in the brain, they have a lot in common,” Neria said. “And we know quite a bit about how the brain processes trauma.”