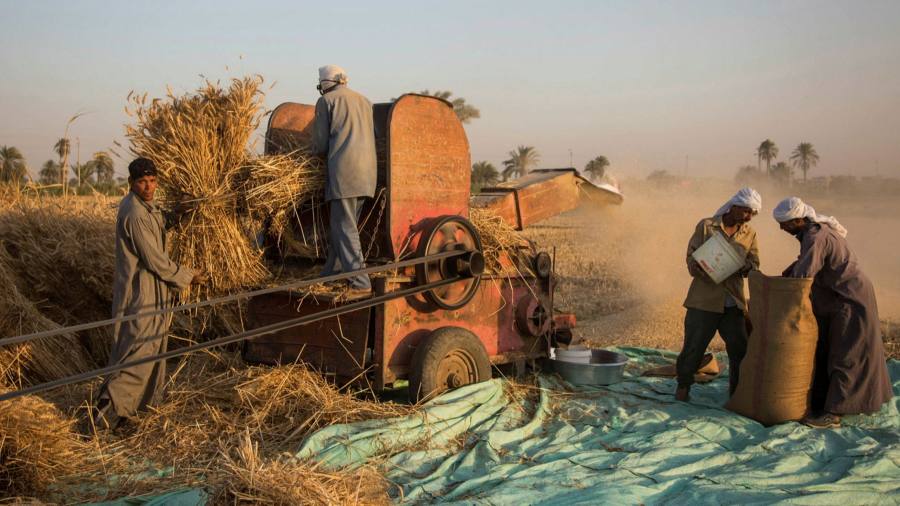 Commodities prices are tumbling from historic highs, as investors reverse bullish bets on everything from corn to copper and oil in the latest sign of recession fears gripping financial markets.

Brent crude dropped below $100 a barrel on Wednesday for the first time since April, leaving it 29 per cent below its recent peak. Other markets have also faced severe falls, with the broad S&P GSCI agricultural prices index down 28 per cent since its all-time high in mid-May and a London Metal Exchange benchmark tracking half a dozen industrial metals losing a third of its value since peaking in March.

Such steep declines come as major central banks turn the screws on monetary policy, jacking up interest rates in a bid to curb scorching inflation. Investors are fearful that higher borrowing costs will derail the global economy after rapid price growth triggered a cost of living crisis.

That marks a sharp turnround from fierce rallies in commodities markets earlier in 2022, when raw material prices were pushed higher by a post-pandemic bounceback, lack of investment in new energy and mining assets, and supply constraints exacerbated by Russia’s invasion of Ukraine.

Hedge funds have been central to the recent price declines across commodities — selling out of long, or positive, positions in certain commodities and often replacing them with bearish wagers.

Although physical supplies of many raw materials remain tight, “hedge funds are taking their chips off the table, [they] are leading big liquidation flows,” said David Whitcomb, head of research at Peak Trading Research.

London-based computer-driven fund Florin Court Capital said it had placed bearish bets in recent months on metals traded in China including zinc, nickel, copper and also steel making ingredient iron ore. These positions are based on downward price momentum in the short and medium term “as markets began to focus on the considerable risks of a hard landing”, said founder Doug Greenig, former chief risk officer at Man Group’s AHL unit — referring to the possibility of a sharp downturn.

Aspect Capital, which manages $10.6bn in assets, has been betting against commodities such as copper, silver, iron ore and steel since around early May, as prices have sold off in anticipation of a global economic slowdown. In agriculture, it has been shorting sugar and cocoa for some time, and has recently taken small short positions in wheat.

A total of 153,660 agricultural futures contracts worth $8.2bn were liquidated in the week to June 28, the US Commodity Futures Trading Commission said in its latest report. This was the second biggest sell-off of long positions on record, according to Peak Trading Research.

In the energy market, traders have weighed up risks to supplies against the likelihood of a demand-sapping recession. Brent, the international oil benchmark, has shed around 10 per cent this week alone. Citi cautioned on Tuesday that if there is a recession, oil could fall to $65 by year-end.

Still, JPMorgan has argued there is a risk Russia purposely cuts supply like in gas as “a way to inflict pain on the west.” The bank has warned oil could soar to $380 a barrel in the most extreme scenario where Russia slashes 5mn barrels a day from the market.

Meanwhile, in metals markets, copper was trading just above $7,500 a tonne on Wednesday and is now down more than 20 per cent this year. That reflects a significant reversal from copper’s record high above $10,600 a tonne in April, when it was buoyed by supply disruptions and booming demand as lockdown restrictions eased.

Bearish bets on copper currently stand at their highest level since 2015, according to Marex, a commodities broker with hedge funds net short 60,000 lots, or 1.5mn tonnes of the red metal, across all markets at the end of June, up from 4,000 lots at the start of May.

Guy Wolf, global head of market analytics at Marex, said the rise in short positions had largely been driven by trend-following quantitative funds. “This is a pretty large short position,” he said.

George Cheveley, portfolio manager at Ninety One, said that concern about the near-term economic outlook for demand had turned investors’ attention away from the longer-term energy transition narrative that drove the price of copper to a record high just three months ago.

“The market is looking ahead six months and saying if orders don’t come through and China doesn’t rebound then we will have higher inventories and things will look a lot worse,” said Cheveley. “You have to have a very bearish outlook to come up with that scenario, but the market is quite prepared to believe that at the moment.”

The broad narrative shift has led to “a lot of air coming off the market”, said Konstantinos Venetis, senior economist at independent research firm TS Lombard. “The market is saying sell now and ask questions later.”